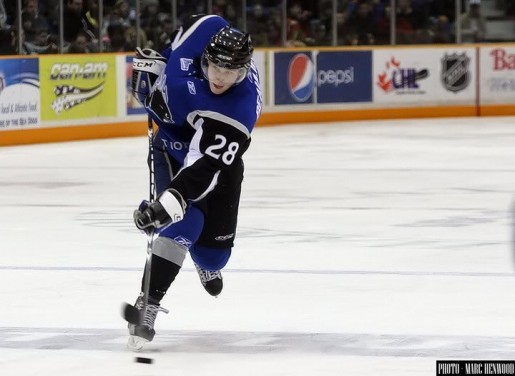 The son of current Sarnia Sting Head Coach, Jacques Beaulieu, Nathan has been on the radar for some time, hoping to see flashes of the high end skills he possesses. Drafted to Saint John while his father was still the coach and General Manager there, Nathan has been in his father’s shadow for quite some time. After a one season stop in London, Jacques was recently hired by Sarnia. The time and space provided away from the shadows of family allowed Beaulieu to blossom this season with the top ranked Sea Dogs. Currently in the midst of a Memorial Cup Run, Nathan has played an integral role on a team largely comprised of top ranked 2011 NHL Draft Eligible players. This exposure has helped them all, who are giving the rest of the CHL a run for their money.

With such a premium set on offensive defenseman, Beaulieu’s stock is sure to stay high come June. His mix of size and high end skill, to go a long with a nasty edge, make him attractive to almost any team in the market for an upgrade on the blueline, especially ones looking to get mobile.

Top Prospects Game: Scored a goal using his wrist shot, to go with a minor penalty.

“He’ll be an offensive-defenseman … he’s a good skater, good puck-mover,” NHL Central Scouting’s Chris Bordeleau told NHL.com. “He has a good shot and is very poised with the puck. He’s a hard worker and reads the play well. We thought he should have had more points this year than he had, but overall he has the NHL quickness already and that’s what’s really important at this stage.”
– (NHL.com)

3 thoughts on “The Next Ones – Nathan Beaulieu – NHL 2011 Draft Prospect Profile: From Saint John to Minnesota”