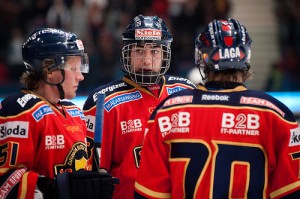 Centers who can play on a team’s top two lines come at a premium in today’s NHL. Whether overpaying in free agency or via trade, these types of pivots just don’t come cheap. Most General Managers have come to this conclusion and have targeted them heavily come Draft Day.

With that in mind, Swedish born Mike Zibanajed comes highly touted. A center with the ability to shift to the wing, Zibanajed brings size, skill and toughness to the table, and the projection as a future top six centerman. It’s no wonder his name has darted to the tops of many draft lists, with his Youtube videos becoming a top search amongst draft eligible players.

Top Prospects Game: Did not participate – CHL only.

“Mika’s a real power forward but also has soft hands, good vision and fine skating skills,” NHL Director of European Scouting Goran Stubb told NHL.com. “He has tremendous balance and is hard to knock off the puck. He’s very strong in the battles along the boards, finishes checks with authority and has a heavy shot that he gets off quickly.”
– (NHL.com)

“Suffered due to playing on the wing with struggling (Victor) Rask who was unable to deliver the puck. Very good hands, receives tough passes well in stride. Makes saucer passes through traffic. Has vision and creativity- frankly is more natural at centre. Drives the net hard.”– Red Line Report, March, 2011