The Stanley Cup playoffs are in full swing at arenas across America (and in Montreal). However, the Winnipeg Jets are on the outside looking in for the third consecutive season since returning to River City.  There is one constant that has contributed to the Jets inability to punch its playoff card and that is the fact the team is consistently inconsistent. The question now is can Coach Paul Maurice who signed a four year contract set the team on a new course that will lead them to the playoff promise land.

The Winnipeg Jets are an enigma much like their potential superstar power forward, Evander Kane who shows flashes of brilliance mixed in with large dashes of immaturity and inconsistency. He finished the season on a high note by scoring 2 goals in two games after a 17 game goalless drought. Kane’s struggles mirror the Jets season under Paul Maurice as they started out like gangbusters, which got them back into the playoff race just in time for the Olympic break. It is well documented that after the break the team proceeded to take a monumental nosedive that coincided with rookie sensation, Mark Scheiffle’s injury that resulted in him being lost for the remainder of the regular season.

It was not all doom and gloom for the Winnipeg Jets as Bryan Little had a consistent season showing that he is a solid number two centre on a team that is lacking at that position while Blake Wheeler proved that he is a force to be reckoned with as despite the injury to Scheiffle and the fact he played in the Olympics he had a tremendously effective second half of the season.  The Dustin Byfuglien experiment at forward also paid dividends especially when he was paired with Wheeler and Olli Jokinen.

If there is anything that Coach Maurice must focus on for next season he sets a flight path for the team is their tendency to look like world beaters one night and then play like a team without direction the next night. If we are are to put any weight into how the team finished the season, with two wins over a Boston Bruins team that is the odds on favourite to hoist Lord Stanley’s cup and an upstart Calgary Flames squad that has shown spunk and fight during the last half of the season, it appears that Coach Maurice is laying the foundation to eradicate the bad habits that have kept this team out of the playoffs. There is no need to look any farther than putting the troops through ha bag skate after the teams victory over the Bruins. It showed that Paul Maurice has a plan and after 34 games at the helm has the teams attention.

Breaking the Jets of their bad habits should not only fall on the shoulders of Paul Maurice. It is now time for Kevin Cheveldayoff to show that he can do more than make astute draft day decisions. The Atlanta Thrasher management team left the draft cupboard bear and Kevin Cheveldayoffs main focus since taking on the role of G.M. for the Winnipeg Jets has been to build up prospects through the draft. However, the time has come for him to break from his comfort zone and give Coach Maurice new tools to work with that compliment the teams core. He has tried his hand at the free agent market with mixed success case in point Devon Setogucci but he also hit pay dirt with Michael Frolik who could be a key piece to elevating this team from mediocre to playoff material. 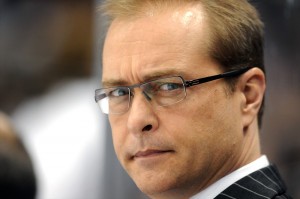 It does not take a Don Cherry or Barry Melrose to know that the Winnipeg Jets are more than a few pieces away from being a playoff contender. This season has left more questions than answers for fans but at his year end presser Chevy made it clear that goaltending is not a problem in his mind. This leads one to believe that he will be focusing on strengthening the defence and the fourth line as the ‘core’ of the team is locked up with long term contracts except for Dustin Byfuglien and Ondřej Pavelec’s save percentage and goals against both got worse this season.

The goal of every NHL team is too one day drink from the Stanley Cup. However, each team sets its own internal goals and time frames that the general public is not privy too. True North is nothing if not patient with this process and Kevin Cheveldayoff has fit perfectly into that corporate culture. The telling sign is that there is no sense of urgency in his mind. He is not going to rush the process much like the team owner didn’t rush the process when looking to acquire an NHL team. However, there is no time like the present to veer off course after this season as the players in their post season interview to a man proclaimed they are tired of missing the playoffs. One thing is clear- Paul Maurice has the ear of the players. One thing that is not is do the players have Chevy’s attention.