Good day readers.  As you hopefully recall from our post last week, Kristi Loucks and I have teamed up together for an occasional series of articles we will refer to collectively as The Wrap Around. In last week’s inaugural piece, we previewed the Blackhawks longest road trip of the year known as The Circus Trip.  This name is derived from the Blackhawks’ eviction from the United Center while the circus comes to town for the last two weeks of November. The team is now halfway through the trip. Kristi will start things off this week.

The Good, the Bad and the Ugly

Well, week one of the Chicago Blackhawks circus trip is over, and it didn’t finish quite as everyone might have hoped. However, the Hawks did grab three points. While not a terrible number, certainly it is one they will look to build on.

First off, how can we not mention the points run of Patrick Kane? He has now extended the streak to 16 games and it doesn’t look like he plans to take his foot off the gas at all. In fact, that whole second line is melting the ice every time they set foot on it! Artem Anisimov has quietly built his own streak with six points in the last six games.

Anisimov scores again and Patrick Kane's point streak is extended to 16 games. It's 3-3 with 7:40 remaining. #Blackhawks

Having said that, the Hawks have had the same issue for much of the season. They play hard for 40 minutes, but there are always about 20 minutes interspersed throughout the game where it seems like they are skating in quicksand. Unfortunately, this has allowed teams to get back into games the Blackhawks are more than capable of closing out.

Finally, this is the ugly part.  The Penalties! Every short-handed opportunity the team gives up lately seems to end with a puck in the back of the net. How many games might the Hawks have closed out in regulation if only they hadn’t taken a dumb penalty? The Hawks know it, and other teams know it too. Opponents will keep trying to draw the Blackhawks into taking the penalties, especially if it keeps working. The penalty kill needs to be stronger, and more importantly, they need to keep such short-handed times to a minimum.

I'm a little pissed about the stupid penalties that the hawks are taking. PK isn't working for me tonight! SCORE PLEASE!!! #Blackhawks

Perhaps Rick’s six point prophecy is in play, but my hope is that there will be a different tone as the Hawks hit California for the next three games. The next three games are not exactly must wins, but in my opinion they are the most important games they’ve played thus far this season. What do you think, Rick?

On the Road Again…

The Blackhawks continue their 6-game road trip on Wednesday night against the San Jose Sharks. While the Sharks are a team that has been hit with some injuries, they have continued to surge. The Sharks are currently riding a six game winning streak, and they won’t be handing anything over.

The next stop is Anaheim where the Hawks will be visiting the ‘not so mighty’ Ducks. Yes, Anaheim has won a few games since they were in Chicago, but there still isn’t much to cheer about when it comes to the quack-less Ducks. Of course, that doesn’t mean they should be taken lightly by any means.

Finally, the Hawks will wrap up in the City of Angels, where they’ll visit a very different Kings team than they faced at the beginning of the season. Perhaps this team is the most formidable of the three, but all three can be dangerous in their own right.

Cruising For A Bruising

Because the Blackhawks have a couple of bigger, more punishing styles of hockey at the end of this trip, here are some thoughts about possible roster moves that could be made in a sort of counter measure. 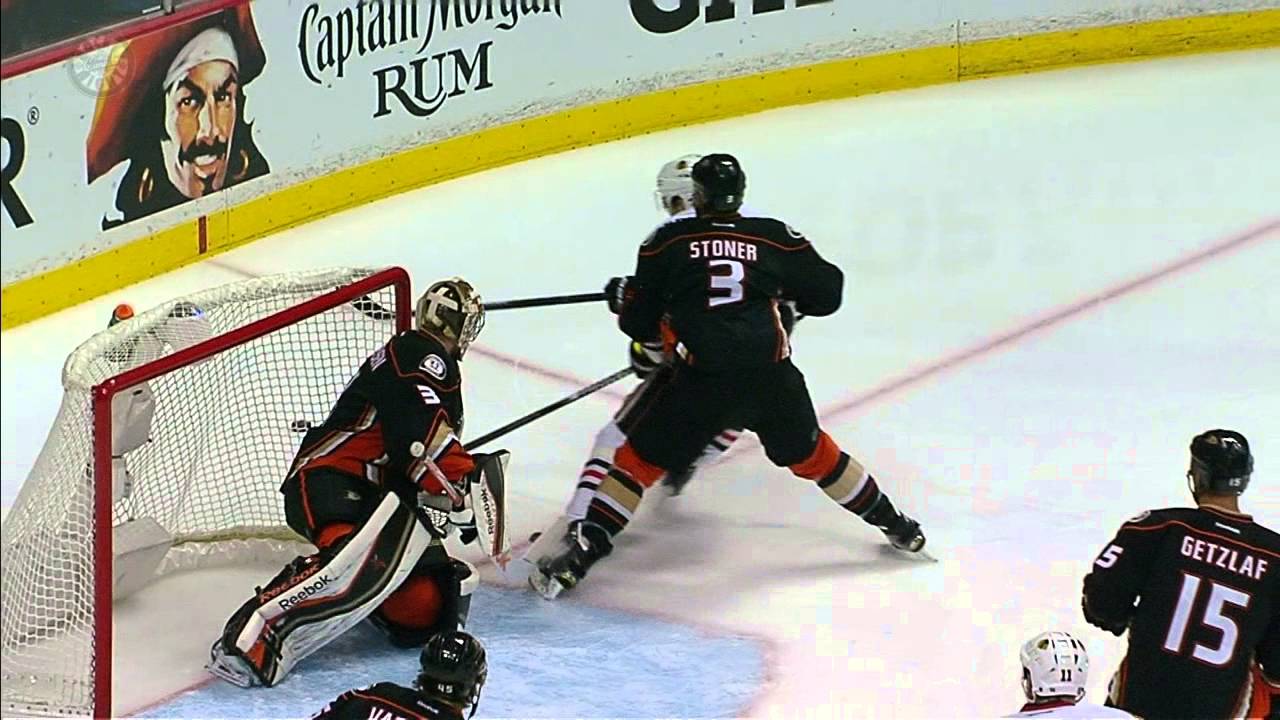 Will we see more of Viktor Tikhonov, and (get ready for this Hawks fans) is it possible that Bryan Bickell gets a call, to counter the more bruising physical styles of the Ducks and the Kings? And, if so, who sits?

Will we see either Viktor Svedberg or Erik Gustafsson called up to bolster the defense in spite of the fact that Trevor Daley played a much more sound game on Saturday night?

So Rick, what is your take on the penalty situation? Still sticking to the 6 points?

I think they have to be a little pissed, and I’m hoping bringing on Mario Kart, and hanging in Vegas has done them some good. I expect that they will come out firing for five more points, but I do think there are going to be some roster moves rattling around in coach Quenneville’s head. The real question is will he pull the trigger or let it ride?

Oh dear Kristi, the season has only reached the quarter pole and you seem a bit stressed.  Here is a fun fact: the Blackhawks only have 3 fewer points this year through 21 games played as compared to their record last year. Their record currently stands at 11-8-2, which I can live with – for now. Yes, you are correct, it sure isn’t the fault of Kane, Anisimov or Panarin. We may be looking at a 100-point-forward at this rate for #88.

As for the lack of being able to play a full 60 minutes, I agree and am at a loss for words regarding why the Blackhawks cannot seem to string together a complete game effort. Despite a lackluster effort against Calgary, Darling kept them in it and got them to overtime. Yet, they had almost zero offensive zone time in the overtime period and lost as a result. Then they battle back against Vancouver to tie the game at three with seven minutes left, before completely collapsing and allowing three more goals. You worry about putting together a solid 60 minutes, let alone 40; while I am happy if they can string together 10!

Regarding the power play, prior to their horrible penalty kill performance against Vancouver, the penalty kill was doing a solid job and was sitting 11th at about an 89% kill rate. My how things changed! How Daniel Sedin was left alone in front here I will never understand. No gap control and everyone chasing the puck will result in goals like this:

Now comes three games against San Jose (Wednesday night), Anaheim (Friday afternoon) and L.A. on Saturday. San Jose is red hot winning six straight on the road, and the Blackhawks are coming off a garbage ending against Vancouver. They also had a little R&R in Las Vegas. As the great Pat Foley likes to say: “Something has got to give.”

Interestingly Kristi, you bring up Tikhonov and Bickell to help add some brawn for these California games. As you know, I have written extensively about Bickell, and I am glad to see he seems to be finding his game again in Rockford. However, I cannot see him getting the call-up. At this point he needs to continue to do well and hope for a trade. Remember also that this is a team bonding trip, so don’t expect any Rockford promotions either. As for being physical, L.A. and Anaheim are well aware of the pitfalls of trying to play that way against the Hawks.

Speaking of trade, yeah Daley played much better Saturday. My guess is those trade rumors may have startled him back into reality, as he recognized it is much better to play here then say New Jersey or Buffalo.

So Kristi, will the Blackhawks wow the bigtop to end the trip or will their high-wire act crash and burn? You are predicting five out of six possible points for Act II. I like your thinking. While I indeed originally predicted a six point trip, I am now actually saying they will sweep these games. Toews will make sure of it. I do believe they need to win two of the three to keep a solid grasp on their position in the standings. Anything less, and well this team might be on the wrong end of the elephant parade if you get my drift.

So what do you think Blackhawks fans? Will the Circus Trip end with a bang or a whimper?

Rick is fortunate to live off the I-90 hockey corridor where both his beloved Chicago Blackhawks and Rockford IceHogs (aka Baby Hawks) call home. Hockey has been in his blood since the early 1970’s when he saw his first Blackhawks game at the “Old Barn”. His favorite player is Keith Magnuson followed closely by Bobby Hull (old school!). When not covering the greatest sport, he enjoys watching live music and has even been known to join his beloved bands on stage for a song or two. Follow Rick on Twitter via @HawksStrength