Between sessions of extreme nose-blowing and hardcore sobbing, jilted lovers often make the ridiculous claim that whoever did the jilting will not be welcomed back into the fold with open arms.  People, of course, are constantly saying things they do not mean, and this tendency is accelerated when hearts are broken.  While this claim is totally understandable and forgivable, it is a still a false claim.  NHL fans, if they are fans at all, must DROP this absurd “I’m done with the NHL” attitude.  They are fooling no one, and irritating me.

There are “plenty of fish in the sea”, to be sure.  But while a heartbroken person can be found saying, “I don’t want anyone besides him/her”, jaded fans are talking about watching other sports when and if the NHL resumes play.  Just as basketball and football and whateverball are unacceptable substitutes for hockey, entertaining the possibility of not enjoying NHL hockey is an unacceptable point of view, and holding it disqualifies a person as a fan.

An obnoxious raising of a single eyebrow, coupled with a smug expression of suspicion, is phase one of dealing with a “fan” who would dare stoop to the level that the league and, admittedly, the union have lowered themselves to during these last few months.  The complaint, and it’s a valid one, that greed and selfishness led to the miscarriage of the 2012-2013 season, loses all credibility when the complainer announces his plan to enjoy what the NBA has to offer instead.

Do you really expect to find less greed and selfishness in other professional sports?  Do you really want to compare the integrity of the hockey community with people like Kobe Bryant and Michael Vick?  I hope not, because it’s not a debate worth having.

NHL athletes are not babes in the wilderness.  Far from it.  But the misdeeds of those in the NHL are usually limited to foolish errors of judgment while intoxicated, not calculated cases of aggression and sadism.  In other words, a player who delighted in and profited by the killing and torturing of dogs would NOT be allowed anywhere near a rink ever again.  Just ask Theo Fleury, a man effectively banned from the NHL, who is more a victim than a victimizer, and a good player to boot. 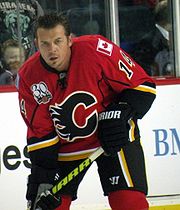 So, while moving on from a person who has moved on from you is the healthy and logical thing to do, we have no such option when it comes to hockey fandom.  Hockey fans are a minority group, dismissed and scoffed at, and like all other minority groups, we must stick together, and with our league, if we are going to survive and thrive.

It’s either that or find another sport that speaks to us, and as all fans know, there is no other sport to be found.