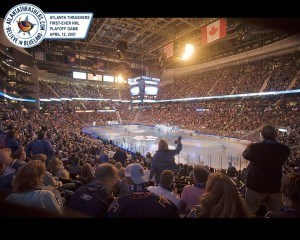 Much like how Arizona will always have a part of Jets 1.0 inside of their franchise, the 2.0 Jets will forever carry a piece of the Atlanta Thrashers. When it comes to the Winnipeg Jets and their playoff chances, why not turn to someone who was there the last time this “franchise” made the playoffs? Let me be clear, we aren’t talking about Jimmy Slater.

J.P Vigier was born in Notre Dame du Lordes, Manitoba and played junior hockey with the Portage Terriers in the Manitoba Junior Hockey League, before accepting a full scholarship to Northern Michigan University. The undrafted winger would go on to score 46 points in 213 NHL regular season games before signing overseas in Switzerland. He would retire in 2012 after playing three seasons with Bern of the Swiss-A League, winning one championship and representing Canada in the Spengler Cup. However, when it comes to J.P’s experience, the most important credential for Jets’ fans isn’t necessarily his stats or championships.

In the spring of 2007, J.P Vigier and the rest of the Atlanta Thrashers were getting ready to take on the New York Rangers after clinching the Southeast Division and finishing third in the Eastern Conference with 97 points in 82 games. J.P had contributed steadily throughout the season with his two-way play, finishing the season with 13 points and a 0 +/- rating in 72 games. Although he had played an integral part in the Thrashers’ season, as the trade deadline passed and moves were made, Vigier found himself the odd man out. “We brought in Keith Tkachuk, Dupuis and Alexei Zhitnik who were all talented players”, explains J.P, “The coaches had to make the adjustments they felt needed to be done and I was in the stands”. Vigier would watch as his team was swept by the New York Rangers, four games to none in the first round.

Fast forward eight years and J.P Vigier is back in Winnipeg, running a hockey school and helping out with the pre and post game show on TSN 1290. Almost a decade later and J.P’s view on the march to the playoffs hasn’t changed from the Atlanta days (from where he sat in the stands to what he sees now). “I had the chance to watch the guys play in Atlanta and support them”, recalls J.P, “Obviously I wanted to be on the ice but I accepted my role”. J.P explains that there are many similarities between the Thrashers and Jets, besides Jim Slater being in the line-up. “Both teams made acquisitions at the deadline and both had great goaltending”, says J.P, “The intensity from the coaches to the players to the fans was there”.

When speaking with J.P one cannot help but feel the passion the 38 year old still has for the game. This passion is utilized by not only TSN 1290, but the Winnipeg Free Press in a segment called “The Whiteboard” where Vigier speaks about his thoughts and views on the team. If there is one message that J.P delivers loud and clear is that of a “team effort”- no one player will win it for you. “When we made the playoffs in 2007, there wasn’t one guy like Little or Byfuglien carrying the team”, says J.P, “Everybody was going and it was a collective effort”. Sound advice by Vigier, considering the recent suspension of Byfuglien and the injury battles Little has gone through.

J.P Vigier came from humble beginnings, is grateful for his time with Atlanta and is proud of where he is at today. There is a certain irony that comes with covering and talking about the play of the organization that you once played for. The Jets’ chances at making the playoffs have been getting worse as of late and it seems that the last game of the year vs. the Calgary Flames could decide who moves on and who hits the links at Shaughnessy. This final showdown also means that another ex- Thrasher will be in the building with an entire different point of view than Slater or Vigier. Bob Hartley, the coach who led the Thrashers to their first ever playoff berth and healthy scratched J.P, is the head coach of Calgary. “Bob Hartley is an intense coach and will make whatever adjustments needed to win”, states J.P., “I would know”.