In another season of poor hockey the Sabres have had a few bright spots.  The biggest of them all may the emergence of forward Tyler Ennis.  Ennis is without a doubt the Sabres MVP for the 2014-15 season.  The 25-year-old stepped up this year as not only a dynamic offensive player, but as a team leader as well.

Playing at Another Level

Ennis will likely finish the season with 20 plus goals for the third time in five full NHL seasons.  The two years Ennis missed 20 goals were cut short by injury in 2011-12 and the lock out shortened season of 2012-13.  The former first round pick has been a consistent 20 goal scorer his entire career, but something is different about his game this year.  Ennis seems to be playing at a much higher level than he was in previous years.  The change of play doesn’t jump at you in his statistics, but watching the games the “eye-ball test” tells you something different.  Night in and night out Ennis is the best offensive a player on the ice and generating chances for his line. He’s the type of player that brings fans out of their seats on a nightly basis with his speed and skill.

Throughout his career Ennis has always tried to do a little too much to generate offense.  At times he would rely on his hands too much instead of using his line mates resulting in frustrating turnovers.  This season Ennis is taking a different approach and is not only benefiting his play, but the play of his line mates as well.  Ennis was part of the GEM line along with Zemgus Girgensons and Matt Moulson; the line was responsible for nearly 48% of the Sabres scoring at one point of the season.  With Girgensons out the remainder of the year, Johan Larsson has stepped into the middle and excelled alongside Ennis.  Known for his great speed and skill so far in his career, Ennis has used his vision to take his game to another level.  He’s taken over the Sabres power play quarterback role-playing the point and the unit has seen a boost in production.

Not only has the offensive game of the Canadian forward jumped to another level, but he’s embraced a leadership role with the team.  Ennis is a very mature player this year and has embraced the opportunity to guide young players like Zemgus Girgensons 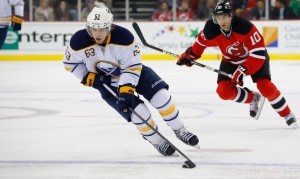 and Johan Larsson.  He’s been the perfect line mate and role model for those two kids this season.  He’s helped them grow their game on and off the ice.

To put in perspective, going into the season the debate was Ennis or Hodgson.  Both are signed to similar long-term contracts and are similar players.  The Sabres would likely need to choose between the two going forward.  Ennis has blown past Hodgson this year in his development.  The race isn’t even close anymore.  While Ennis has matured a great deal, Hodgson continues to play “his way”.

Ennis has grown into a cornerstone player for the Sabres going into the bright future of the club.  He’s rewarded the Sabres with their loyalty of giving him a longer term contract last offseason.  As the team around Ennis grows, his potential will grow with it.