Judging by the scoresheet, a 4-3 loss to the Nashville Predators on Thursday night, suggests that the Calgary Flames were in a tightly contested game. Having heavily outshot the Predators 35-21, it might seem the Flames drew the short straw in the goaltending battle. But, anyone who watched the game will acknowledge that Calgary played 56 minutes of the worst hockey they’ve played all season, and – save a late burst of three goals in three minutes – the Flames were outplayed all night.

Despite missing both PK Subban and Roman Josi – the Predators’ two best defensemen – Nashville calmly and efficiently controlled the puck all night. As Ryan Ellis and Mattias Ekholm put on a clinic with their transition game, the Flames defense struggled to make even the simplest first pass out of their zone.

Ultimately, this game was a perfect microcosm of the biggest issue facing the Flames today: A crippling lack of depth on the blue line.

One Pairing on an Island

As the season rolls on, it’s become more and more evident that the Flames are entirely reliant on the top pairing of Mark Giordano and Dougie Hamilton. The continued struggles of TJ Brodie, coupled with the inability of Dennis Wideman, Jyrki Jokipakka and Deryk Engelland to elevate their play has led the Flames to a place where the team goes as the top-pairing goes.

This reliance on Hamilton & Giordano to carry the team is evident by the numbers behind their play in wins and losses (per NHL.com). 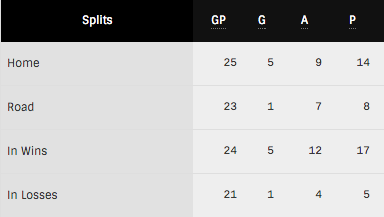 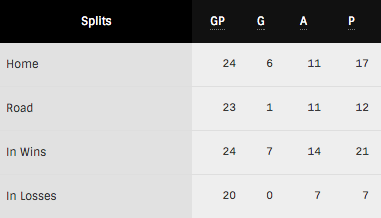 Together, the pairing has combined for 12 goals and 38 points in the Flames’ 24 wins, while compiling only one goal and 11 points in the team’s 24 losses. That drastic difference in production shows the team’s reliance on the top pairing’s offense in order to win.

On the other hand, the remaining four ‘everyday’ defensemen on the team have combined for four goals and 26 points in Flames wins, with four goals and 17 points in the team’s losses – a relatively negligible difference. Obviously more is going to be expected from a team’s top pairing, but watching the Predators’ blue line dominate the Flames as they did without their two best defensemen (which included two goals from Ryan Ellis) shows how critical it is to have strong play from your second and third pairings.

While he routinely plays the fewest minutes of all blue liners, Jyrki Jokipakka has suited up in 34 of the Flames’ 48 games this year, proving to be a mainstay on the team’s back end. Considering his level of play, though, it is puzzling that Jokipakka has hung onto his role with the team.

Never billed as a very offensive defenseman, Jokipakka was still billed as a mobile defender who “can rush the puck well or make a good first pass with regularity” (per HockeysFuture.com), and could “move the puck well as a power play quarterback and handle the puck with poise.” After 34 games, it’s hard to say that Jokipakka has performed well in any of those areas. Proven to be extremely prone to committing turnovers, he regularly looks panicked when attempting to move the puck out of his own zone.

As of today, Jokipakka carries the lowest Corsi percentage of any regular at 44.2 percent (per Hockey-Reference.com). Additionally, Jokipakka’s relative Corsi (-8.5) is not only the lowest on the team but is also last among all defensemen in the NHL (min 30 games).

It’s no new revelation that Brett Kulak has performed extremely well in his limited time with the Flames this season. Two years younger than Jokipakka, Kulak has outperformed the Finn in almost every way.

Kulak’s three points in 15 games aren’t blowing the roof off, but he is on a marginally better offensive pace than Jokipakka (six points in 34 contests). Additionally, Kulak has fantastic underlying numbers, carrying a 52.7 Corsi percentage that is equal to Mark Giordano, and good for second among all Flames defensemen behind Dougie Hamilton.

Continuing to sit in the press box is not helping his development, and – having performed well above expectations in 15 games with the team – there is really no argument for keeping the 23-year-old out of the lineup when looking at the widespread troubles on the blue line.

With Dennis Wideman’s consistent struggles on the second pairing, head coach Glen Gulutzan has the perfect opportunity to try out Kulak with increased minutes on the second pair, sliding TJ Brodie back over to the right side where he has spent most of his career.

It’s clear that should one of Giordano or Hamilton be injured, the Flames would fail to keep pace in the tight Western Conference, and could potentially head into a tailspin. Barring an unlikely trade, the obvious solution could be sitting right under the management’s nose – or at least in the press box.