Before the expansion draft took place on June 21st, the Toronto Maple Leafs made the decision to protect Josh Leivo from the Vegas Golden Knights. The negative repercussions of this decision included exposing two promising prospects in Brendan Leipsic and Kerby Rychel.

In the end, the Golden Knights decided to choose Leipsic over Rychel. I know its disappointing that the Leafs lost him for nothing, but I would be more upset if they lost Leivo, and I’ll explain why.

Although small sample sizes make these decisions rather difficult, Leivo has consistently improved his production year after year in the NHL. Overall, he has accumulated 18 points in 41 games. At a quick glance, these numbers don’t sound very impressive, but that isn’t what this article is about. What I would like to focus on is his consistent improvement since his NHL debut.

There has been a constant upward trend in Leivo’s seasonal PPG stat since his first season with the Leafs. Aside from a slight decline in the 2014-15 season, there have been big improvements in each of his past two seasons, with the most recent season reaching a 0.77 PPG. 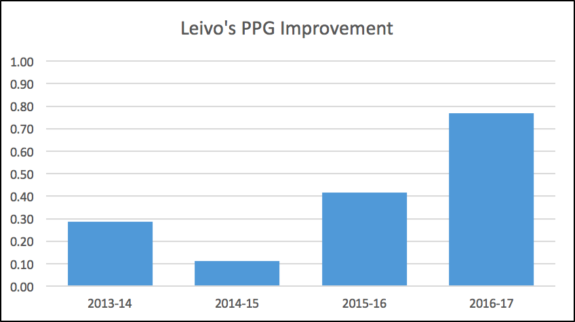 For comparison’s sake, that places him in-between Nikolaj Ehlers and James van Riemsdyk in terms of PPG proving that Leivo is an effective player when in the lineup. Maybe with more ice time Leivo could produce like a second-line forward consistently — he has the size and skill to handle a second or third-line scoring role.

The best problem for an NHL team is having too much talent for an 18-man roster. That’s exactly what the Leafs are dealing with at the forward position. With so many options, Matt Martin’s contract may prevent players such as Leivo and Kasperi Kapanen from getting ice time without the occurrence of an injury.

If Martin is dressed in the starting lineup and everyone is healthy, then Leivo will be a healthy scratch waiting for his opportunity to shine. He deserves tons of credit for being able to step into the lineup at any time and produce. However, without getting ice time to show he can be a full-time player, it must be difficult to continue progressing.

With players such as Kapanen, Leivo, Kerby Rychel, Andreas Johnsson and Trevor Moore pressing for their NHL opportunity, more and more people question the Martin contract.

On one hand, insiders say you can’t replace the kind of leadership and the protective role that Martin plays. On the other hand, one could argue that replacing him with a more skilled player like Kapanen or Leivo would make the Leafs even more of an offensive threat. They already have three high scoring lines, why not try to make it four?

People may not agree with taking Martin out of the lineup in favour of another young forward, but it shouldn’t be a foregone conclusion that Martin dresses for every game. I think the Leafs would benefit from Martin playing a shorter season as a healthy scratch in favour of Leivo drawing into the lineup. Being able to roll four lines that can all score is a rarity in the NHL.

Where Does Leivo Fit?

When in the lineup, Leivo is an offensive force. He has a wicked wrist shot and a high level of hockey IQ. His only clear weakness that keeps him out of the lineup is his skating. He is not a fast skater, which doesn’t hurt him when he’s fighting for the puck in the offensive zone, but he does need speed to be a good defensive forward who can kill penalties.

Babcock on Leivo: "We don't have enough penalty killers so he gets hosed. He's played good & I've talked to him a lot about that."

Since the Leafs already have an elite level of scoring, Leivo is scratched because head coach Mike Babcock likes to dress skilled penalty killers instead of scorers to try and balance the team. To get Leivo into the lineup Martin would need to be scratched or injuries will have to occur on the wing. If neither of this happens, Leivo can only hope for a trade that will free up a roster spot for him.

Who Gets Traded to Give Leivo a Spot

With the offensive surplus the Leafs have right now, players such as James Van Riemsdyk or Tyler Bozak could be packaged for a defender. A trade involving these forwards would allow younger forwards to draw into the lineup and replace the lost scoring. Any trade would likely involve a defenseman coming to Toronto, making the Leafs a more balanced team.

If Bozak and JVR are traded, a spot on the left wing and centre positions would open up and the lines could look like this, assuming they are replaced internally.

If only JVR is traded, the lineup would look the same with some slight alterations. Nylander most likely wouldn’t be forced to transition to centre so soon — he would stay on the right wing. Leivo would replace JVR and Kapanen would be in the AHL since there’s no reason for him to sit as a healthy scratch when he doesn’t have to clear waivers.

If Leivo can continue to progress like he has in the past two seasons, it may be realistic to think he could pick up the production lost if a JVR trade were to happen. A small sample size of his production doesn’t prove this, but if he manages to stay on the roster for a full season, we might be surprised.

No Regrets for the Leafs

The Leafs will not regret protecting Leivo over Leipsic because he is a better replacement for JVR, should he be traded. He is 6’2″, 200-pounds and has a near elite wrist shot. Leipsic may be better suited to play a depth forward role, but Leivo has the skill-set to play in the upper-half of the lineup.

When given the opportunity, Leivo has produced in the NHL. His chance could come via trade which would free up roster space, scratching Martin or an injury to a forward. It’s time for Leivo to get his chance so he can prove why the Leafs made the right decision to protect him from the expansion draft.