With the Minnesota Wild defeating the Colorado Avalanche in overtime of Game 7, they now move on to face the Chicago Blackhawks for the right to represent the Central Division in the Western Conference Finals.

The Wild were not a popular choice to topple the Avalanche, and seemed to relish the underdog role. The team will be in a similar position against the Blackhawks, who finished behind Colorado in the standings but are a much more imposing playoff opponent than the young and inexperienced Avalanche.

Ryan Suter is the definition of a minute-eater, playing almost 30 minutes per game in the first round and drawing the toughest matchups alongside Jonas Brodin. Mike Yeo will have to pick his poison regarding which of Chicago’s top two lines to assign Suter to. Bryan Bickell, Jonathan Toews, and Marian Hossa round out the nominal first line for the Blackhawks, with the trio of Patrick Sharp, Ben Smith, and Patrick Kane behind them.

Suter excelled in the Colorado series, putting up a decidedly positive Corsi number despite playing against the Avalanche’s best forwards. This is mediated in part by Colorado being a dreadful possession team, but is impressive nonetheless; defensemen used in shutdown roles are almost always in the negatives in terms of raw and relative Corsi, and often significantly so.

If Suter can manage to neutralize one of Chicago’s top two lines, it would go a long way towards a potential Minnesota upset. The Blackhawks did not get consistent scoring from any depth player other than Andrew Shaw against the St. Louis Blues in Round 1, but were bailed out by great performances from some of their stars.

The other “matchup” of interest is between Corey Crawford and the duo of Darcy Kuemper and Ilya Bryzgalov. Kuemper suffered an injury late in Game 7 against Colorado, and it is currently unclear whether or not he will be able to play in Game 1 in Chicago. Whatever the case, Crawford has been incredible in each of the last two postseasons, and the Blackhawks should have a sizable edge in net.

The operative word, of course, is “should” — as with any goaltender, Crawford is hardly guaranteed to play well. If the Wild can do to Crawford what the Blackhawks did to Ryan Miller, the team’s chances of moving on increase dramatically. 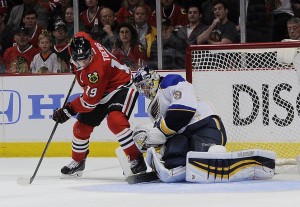 Minnesota has a much deeper offense than it did last season when it played Chicago in the first round, now able to boast the likes of Mikael Granlund, Matt Moulson, Charlie Coyle and a healthy Jason Pominville in its top-6. The Wild had no trouble scoring against the Avalanche in the first round, averaging more than three goals per game and notably coming back from a deficit four separate times in Game 7. On the other side of things, the Blackhawks bring back much the same roster as last season. During the latter stages of Round 1, Patrick Kane appeared to shake off the rust from a previous injury and looked like himself again. Jonathan Toews had three game-winners against the Blues, including one in ovetime. Marian Hossa and Patrick Sharp are not producing to their typical standards, but the list of big names is simply overwhelming; on paper, Chicago has a clear advantage offensively.

The story is much the same on defense. The Blackhawks’ group of six blue liners is bested perhaps only by the team they just dispatched in the first round. After Ryan Suter, Brent Seabrook and Niklas Hjalmarsson are better than any other defenseman on Minnesota’s roster. While Jared Spurgeon is fairly underrated in hockey circles and Marco Scandella has improved noticeably this season, there is no doubting that the Blackhawks again have a leg up.

An important caveat: Looking at rosters on paper can only tell us so much. The Avalanche are probably “better” than the Wild if you simply look at names, but the result of the first round series reflected the opposite. That Chicago appears superior to Minnesota on paper is by no means a guarantee that the Blackhawks will roll past the Wild, or even beat them at all.

Still, it is difficult to pick against Chicago when taking into account its obvious roster talent and its sparkling playoff pedigree. I have Chicago moving on to the Western Conference Finals in 5 games, with the Wild’s lone win in the series coming at home in Game 3 or 4. Minnesota is evidently a better team than last year, but it will not be enough to end the defending champion Blackhawks’ quest to repeat.