Montreal vs Boston. No match up sparks more vitriol than when these two teams go head to head. It stems not just from the past encounters, but from the makeup of the cities themselves.

Boston is a blue collar, nine-to-five city. The people of Boston work hard for what they get and take pride in their accomplishments. Just as the city goes, the people of Boston expect the same attitude in their Bruins. Whether it be the Big Bad Bruins, the Lunch Pail AC, or the current incarnation of the team: You get size, toughness, and results.

Montreal is a city a city that prides itself on beauty and excellence. They bask in the history of the Blu, Blanc et Rouge. From, Aurele Joliat, to Guy Lafleur, the Montreal Canadiens should play the game fast, and perfect.

It comes as no surprise that when these two cities fans, media markets and hockey clubs come together, there is a clash. Pride, hockey ideology, and bragging rights are all fought for on the ice. When the puck drops at 7:30, the winner of the fight will be the team that plays to their strengths and follows these keys to success. [By the way, if you like this post be sure to sign up for our free Newsletter. We send a couple of our better stories each week.]

There is no mystery surrounding why Montreal acquired Vanek. He is a Bruins killer. In his career, he has 61 points in 53 games against the Black and Gold. While he was only good in spurts in the Tampa series, his game elevates against Boston. If he plays to his form and the B’s can’t shut up down, it could lead to the Bruin’s downfall.

The last Canadiens goal the Bruins faced was Peter Budja. Budjai put on a show that gained and propelled Montreal to a victory they didn’t deserve. Budaj won’t be in the pipes for the playoffs, and outside of Game One in the Tampa series Price wasn’t tested much. The Bruins need to get their big bodies to the net and rattle Carey Price. Historically, Price has faltered against the Bruins in the postseason.

The Canadiens give the Bruins fits. This isn’t breaking news. Montreal finds ways to play just tough enough to get the Bruins to respond, yet don’t take penalties. Add to the equation Montreal tends to get ahead and keep the speed game going, the Bruins get

frustrated. Boston seems to play up the Hate angle more than Montreal. This is going to be a disaster if the Bruins let that bother

them. If PK dives or throws a questionable hit, let him. If Gallagher crashes the net as he does, let him. If you attack Montreal and cut rush to the the box, the series is over before it even started.

Despite what Boston media and management try to portray the team as, Montreal plays good hockey. The team can’t fall into the traps that have been set. Most of all, don’t try to play tough against the Bruins. Pittsburgh went down that road and got swept. The Habs have to have the right players dressed if it comes to that, which against Boston, it inevitably will. However, they cannot initiate because that will motivate the Bruins. 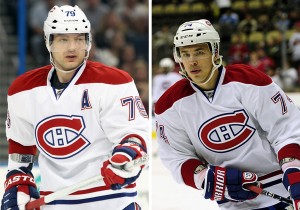 Montreal isn’t going to win an offensive zone war against the Bruins. They don’t have the size or skill. What the Canadiens do have, however, is quick transition and scoring ability. Quick transition is started from great defense. The blue line has to be defended well, cause the Bruins to either turn it over or dump it deep. From there the d corps needs to gain possession, catch the Bruins off guard, and get quick stretch passes. This will lead to odd man rushes which will be the best way Montreal can get on the board.

Montreal has had more time than anyone else to prepare for the next round. The powerplay has been anemic for some time now. It should be fixed coming into Game One. As a team they have to know that the Bruins will, indeed, take dumb penalties. They will retaliate, they will hook and hold to deal with Montreal’s speed. In the playoffs the calls are rare. And when they are called, the team needs to take advantage. Montreal isn’t going to dominate this series at even strength, the PP has to be all systems go.

These two teams have a feud like no other. When the playoffs begin, this is one series that fans don’t want, but they need. There will be goals, there will be hits, and there will be blood. Only one team wins. Whichever team manages themselves better will be the ones inching closer to Lord Stanley. It isn’t easy to predict a series winner, but I’ll go bold. Habs in 6

3 thoughts on “Montreal Canadiens vs Boston Bruins: Keys To The Series”