On an unassuming side street just a few short miles from Buffalo Niagara International Airport, three USA Hockey champions were crowned at the u14, u16, and u18 level this Monday. Detroit Honeybaked, Shattuck St. Mary’s, and the Connecticut Wolf Pack took home the three titles respectively, and battled through one of the more exciting and competitive tournaments in recent memory to earn their honors. 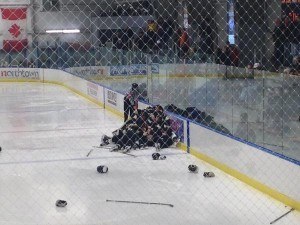 While the u14 (Bantam Major) level isn’t one that even most of the more die-hard hockey fans know much about, it’s an exciting one to follow for any fan of junior and college hockey. This is where your stars start to shine, and the kids who dominated their small town rinks find out if they’re really as good as their parents and coaches tell them they are.

Detroit Honeybaked came into the tournament stacked with some of the most talked-about 2000-born players in the United States, highlighted by the 6’3 200 pound defenseman Bode Wilde who has garnered some pretty high praise from scouts around the world. Johnny Gruden, son of former NHLer and new Flint Firebirds Head Coach John, was another name to watch that came as good as advertised.

Honeybaked rolled through some extremely tough competition in the preliminary rounds in the Oakland Grizzlies and Mid-Fairfield Junior Rangers, before playoff meetings with the Buffalo Junior Sabres and Detroit Compuware that also seemed easier than they should have. It set up the final between Honeybaked and Chicago Mission that everyone in the building (who didn’t have a kid involved) wanted to see, and it was one that didn’t disappoint.

It took two overtimes, and two standout performances from the young goaltenders in both ends, to decide this one, but ultimately Honeybaked came out on top. Matt De St. Phalle put home the game-winner, before tossing his gloves and stick in the air and celebrating the end of an incredibly dominant performance.

Calen Kiefiuk and Alabama-native Valentino Passarelli were the team and tournament leading scorers, each putting home 13 in 6 games. Standout shutdown defenseman Bode Wilde potted 6 goals and added 4 assists himself, showing off his offensive capabilities. It’s safe to assume this isn’t the last we’ve heard from this group.

One of, if not the most prestigious youth hockey programs in the world, Shattuck St. Mary’s was completely dominant in this tournament. To go through the first three preliminary games in a National Championship tournament 3-0 with a +22 goal differential is impressive, but doesn’t even tell the story of just how damn good this team was.

Highlighted by their three Division I-bound stars–Logan Hutsko (Penn State), Brannon McManus (University of Minnesota), and Tyler Inamoto (Wisconsin)–Shattuck had the firepower to put up goals at will and frustrate opponents. Inamoto, the only defenseman on that committed list, had a pair of goaltenders behind him in Ethan Domokos and David Tomeo who stonewalled the few chances they faced.

The only problem: Omaha AAA, a fast and heavy team, seemed poised to challenge for the title. Omaha, who played in an arguably tougher group than Shattuck, handled their competition with ease before meeting Shattuck in a “whoever wins this will probably take it all” type game. It seemed like a coin flip until the teams hit the ice and Shattuck came out flying, cruising to a 4-1 victory. In the final against a Honeybaked team who had played a triple-overtime thriller the night before to advance, Shattuck won 7-0. It was never close.

Inamoto has a good chance to make the United States National Team Development Team in 2015, and Hutsko and McManus seem poised to dominate college hockey in a few years.

This one was a bit of a surprise. At the end of the season, this team of mostly New England Prep School students were ranked #4 in the country despite practicing with each other just a handful of times all season. The rigors of Prep hockey and a tough East Coast u18 schedule gave this group the experience they needed to topple everyone in the division.

Led by James Gobetz and Vimal Sukumaran (Providence College), both from Salisbury Prep, Connecticut was a team that rarely wowed with highlight-reel plays, but played strong and tough in both ends and worked hard to win each game. They were fun to watch and the team’s personality helped them stand out from the rest, but they faced maybe the toughest draw of anyone in the playoffs.

In their semi-final game against top-ranked Shattuck St. Mary’s, the intimidation factor that usually comes into play against a team of that caliber was nowhere to be found. Connecticut and their loud fans actually seemed to be doing the intimidating, and before long the game was slipping away from the Minnesota powerhouse.

After a 4-1 statement win over Shattuck, they took on the North Jersey Avalanche whose cast of younger but incredibly talented stars also boasted a win over Shattuck and another impressive defeat of Mission en route to the final. Connecticut blew a 3-1 lead and let momentum slide to North Jersey as the game went into overtime 4-4, but after nearly nine minutes of end-to-end action Sukumaran broke through and gave the Pack something to howl about. For the second year in a row, a split-season team took home the u18 title.

A huge congratulations to Detroit Honeybaked, Shattuck St. Mary’s, and the Connecticut Wolfpack for their accomplishments and a great season!