The Washington Capitals have filled vacancies at the GM and head coach positions, but they may be looking for a new ECHL affiliate. The ECHL’s Reading Royals have signed a new affiliation agreement with the Philadelphia Flyers after two seasons with the Capitals. During their brief time as a Capitals affiliate, the Royals won their first Kelly Cup in 2013.

No future plans have been announced regarding the possibility of a replacement ECHL affiliate. This uncertainty doesn’t bode well for the Capitals’ plan of action under new GM Brian MacLellan, who emphasized his commitment to improving prospect development.

The Capitals might remain without an affiliate, or they could share one with another NHL team. Should they pursue the former option, they’ll join the ranks of the New Jersey Devils, Ottawa Senators, San Jose Sharks, and Colorado Avalanche–all NHL teams without ECHL affiliates. At present, the Capitals rank 13th among all NHL teams in terms of prospect talent (per the most recent ranking by Hockey’s Future.) In this category, the four affiliate-less teams mentioned all rank in the bottom half of the league.

The absence of an ECHL affiliate could damage the Capitals’ farm system, but the team recently extended their affiliation agreement with the AHL’s Hershey Bears, who played a huge role in the development of players like John Carlson. While top prospects are typically sent to the AHL for further development, many have passed through the ECHL en route to the NHL.

This was evidenced last spring when goaltending prospect Philipp Grubauer transitioned from the ECHL to the NHL in a matter of weeks. Grubauer’s time with the Royals contributed to his promising development, which has led some to wonder if he’ll back up Braden Holtby for the upcoming season. Prospect Stanislav Galiev split his 2013-14 season between the Royals and the AHL’s Hershey Bears, demonstrating the convenience a Hershey-Reading affiliation offers. Patrick Wey and Julien Brouillette, who suited up for the Capitals this season, also spent time as Royals.

Limited Possibilities for a Replacement Affiliate

Moving from one team to another was made easier for these players due to geographic proximity. The Royals’ home, Santander Arena, is located less than an hour from the Bears’ Giant Center. But if proximity is what the Capitals are looking for in a new ECHL affiliate, their options are limited. 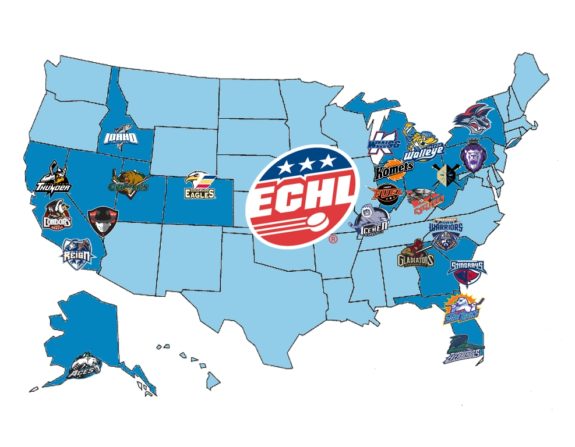 Only two ECHL teams are approximately four hours from Giant Center: the Elmira Jackals and Wheeling Nailers, who are based in southern New York and West Virginia respectively. At present, the Jackals are affiliated with the Buffalo Sabres, while the Nailers already have two parent NHL clubs: the Montreal Canadiens and Pittsburgh Penguins.

Distance and travel times caused problems in the past, as the Capitals cited these reasons for ending their affiliation with the ECHL’s South Carolina Stingrays in 2012. If Capitals management hasn’t changed its stance on this issue, it’s likely that the Capitals will lack a formal ECHL affiliate for the upcoming season.