PHILADELPHIA — Brett Connolly had two goals and an assist to help the Washington Capitals beat the Philadelphia Flyers 5-2 Thursday night.

Evgeny Kuznetsov added a goal and an assist, and Lars Eller and Tom Wilson also scored as the Capitals remained two points ahead of the second-place New York Islanders atop the Metropolitan Division. Braden Holtby stopped 22 shots.

James van Riemsdyk and Scott Laughton scored for Philadelphia, and Carter Hart finished with 27 saves. The Flyers remained five points out of the second wild card in the Eastern Conference.

Washington scored twice in the first 9 1/2 minutes, never allowing the home crowd to get behind a Philadelphia team needing a win to help their playoff push.

Connolly opened the scoring less than three minutes in and set up Eller for the second goal before the midpoint of the period. 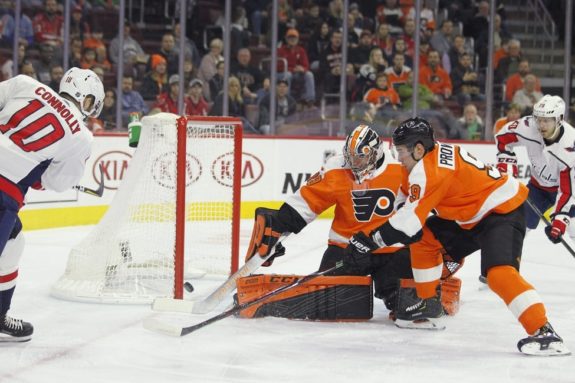 Van Riemsdyk awoke a sleepy Wells Fargo Center a little over a minute into the second when he beat Holtby with a wrist shot as a Capitals penalty was expiring for his 21st.

However, Connolly restored the two-goal lead as he won the puck from Flyers defenceman Philippe Myers and, on an odd-man rush, beat Hart high with a wrist shot for his 19th of the season at 8:43.

Just over a minute later, Wilson got his 20th on a wide-open shot from the slot off a pass from Kuznetsov to make it 4-1.

Laughton pulled the Flyers within two again with 7:38 left in the second.

Philadelphia had two power plays in the third, but couldn’t beat Holtby. The goalie stopped all 10 Flyers shots in the period.

Kuznetsov capped the scoring with his 18th with 2 1/2 minutes remaining.

NOTES: The Flyers were 0 for 4 on the power play and are now 0 for 12 over their last five games. … Philadelphia played its second consecutive game without top winger Jake Voracek, who was finishing a two-game suspension for an illegal hit on the New York Islanders’ Johnny Boychuk on Sunday. … Hart was playing in his first game in three weeks after missing time with a lower-body injury. … Washington has beaten Philadelphia in all three games the teams have played so far this year. The season series ends in Washington on March 24.

Capitals: At Tampa Bay on Saturday.

Flyers: At Toronto on Friday night.