OTTAWA — Anders Nilsson made 34 saves for his second shutout of the season as the Ottawa Senators beat the St. Louis Blues 2-0 on Thursday night.

Christian Wolanin and Chris Tierney scored for the Senators, who snapped a three-game losing streak. 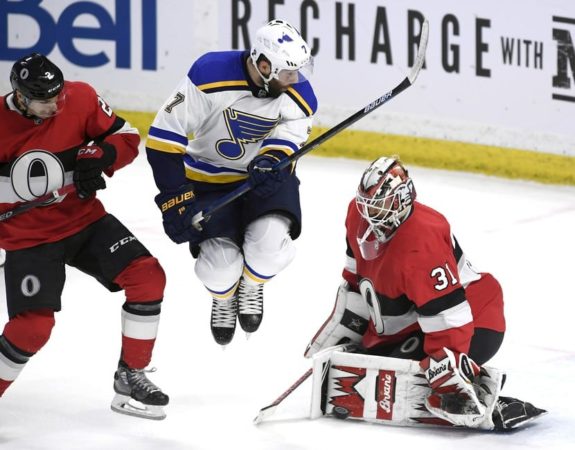 Veronneau, 23, was born and raised in Ottawa and played three years of junior A hockey in the city with the Gloucester Rangers before embarking on his four-year collegiate career with the Princeton Tigers.

Veronneau signed a two-year entry level contract with the Senators on Tuesday after the Tigers were eliminated from the NCAA playoffs. His first skate with the NHL team was on Wednesday.

Brannstrom, who was playing with the Senators’ AHL affiliate in Belleville, Ont., was an emergency callup due to injuries on the Ottawa blueline.

The 19-year old Swede, who was the 15th overall pick by Vegas in 2017, was dealt to the Senators in the trade that sent Mark Stone to the Golden Knights at the deadline.

The two rookies teamed up on a couple occasions to produce scoring opportunities, including midway through the second period when Brannstrom set up Veronneau for a good chance.

Veronneau had four shots on goal in the second period.

The Senators opened the scoring at 13:27 of the second when Wolanin took a cross-ice pass from Mikkel Boedker. Wolanin had an empty net to shoot at as Allen and the rest of the Blues were focusing on Boedker.

Tierney scored into an empty net with 57 seconds to play.

NOTES: Colin White, Mark Borowiecki and Christian Jaros were scratches for the Senators, while Joel Edmundson, Sammy Blais, Jordan Kyrou and Vladimir Tarasenko were scratches for the Blues. … Blues forward Ryan O’Reilly bought 35 tickets for the First Nation Elite Bantam AAA hockey team and their parents after hearing how the team was subjected to racist taunts at a tournament in Quebec City last year. … The Senators will conclude a two-game homestand Saturday when they host the Toronto Maple Leafs. The Blues will play the middle game of a three-game road swing against the Penguins in Pittsburgh Saturday.