Something’s not right. You can feel it. It’s almost something tangible. The change has inspired a sense of awkwardness, like when you see your ex-girlfriend in public after a long relationship.

What’s this change that I speak of? Teams are no longer scared of the Boston Bruins. Formerly a team that was circled on opponents’ calendars, the Bruins find themselves muddling in the middle of the standings.

The Bruins spent the past few seasons squashing opponents and looking down at their rivals from the top of the standings. As December begins to wind down, the Bruins sit outside the current playoff picture. My, how things can change.

Not only have the Bruins enjoyed multiple years of winning, they have dominated opponents. Last year, their +84 goal differential blew the competition out of the water. The Anaheim Ducks and St. Louis Blues tied for second, and only had a +57 differential respectively.

This year, the black and gold have scored 78 goals and allowed 80. A whopping -2 differential. For Bruins fans, it’s almost as big of a letdown as the final episode of How I Met Your Mother. While no fingernails have been chomped off from overly anxious fans, this year’s team doesn’t look nearly as invincible as years past.

In the chart below, via War-on-ice.com, illustrates how Boston is stuck meddling around the middle of the league in many different statistics. This year’s team hasn’t been especially inspiring in the offensive or defensive zones. 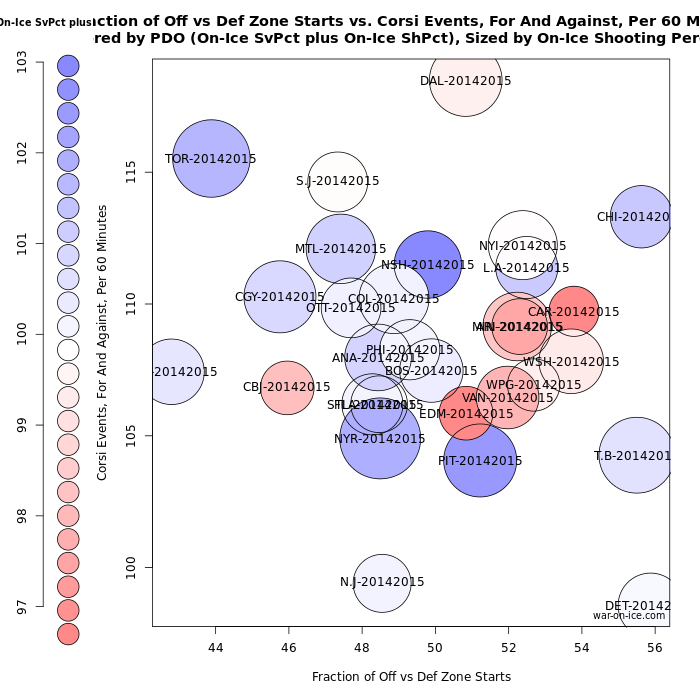 While the Bruins don’t have a glaring problem, they don’t stand out in the graph. The Bruins have notoriously been known as a team that is extremely hard to score against, and one that can also manufacture their own offense. Let’s take a look at why the Bruins haven’t lived up to their standards, and what they could do to turn around their unusual start to the season.

Lack of Forward Depth Is Creating A Personnel Nightmare

Seemingly all the time, my phone pings, giving me the newest updates on Bruins transactions. Players have taken the ride up and down I-95 way too frequently this season, whether on an emergency basis due to injuries, or so that Claude Julien can experiment with different players in his lineups. First round pick David Pastrnak, Seth Griffith, Simon Gagne, Alexander Khokhlachev, Matt Fraser, Craig Cunningham, Ryan Spooner and Jordan Caron have been both flipped and flopped in and out of the lineup.

In the past, the Bruins have owned the reputation of having one of the deepest forward groups in the league. Consistent production from the third and fourth lines would help supplement scoring and create mismatches. They bottom half would also eat up more minutes than opposing teams’ third and fourth lines, thus giving the top two lines fresher legs come the third period.

Another difference from this year’s team is that there seems to be a lack of chemistry. Before, everyone knew the lines. Julien barely had to shuffle his combinations, and when he did, it generated a sense of panic amongst the media and fans. Due to so many inexperienced players and the rotation of fresh faces, the lines don’t have proper time to gel and grow accustomed to each other’s styles of play. This leads to not making the extra pass, lack of finishing on rushes, and occasional general confusion on the ice.

When standouts emerge, Julien should be able to piece together the puzzle and find some continuity on the depth chart. Having chemistry on the bottom half will ignite the scoring from all Bruins’ lines, and the lack of depth problem should be a thing of the past.

The defensive lineup has also shifted back and forth due to many injuries throughout the year. Coming into the season, Johnny Boychuk was dealt to the upstart New York Islanders to avoid the problems of a potential logjam in the backline. With the captain Zdeno Chara sidelined for a decent amount of time and numerous other bumps and bruises suffered along the way, Boston’s depth has been tested. David Warsofsky, Joe Morrow, and Zach Trotman have each seen time with the senior squad. Decimated by injuries, the Bruins haven’t provided Tuukka Rask with their top notch level of assistance.

Ranked 12th in the league in goals against per game, the Bruins have held together well, despite their ferris wheel rotation of line combinations. The story repeats itself, with the Bruins being stuck in the middle when it comes to shots for and against. The black and gold win two out of every three games in which they outshoot their opponent. Fire the rubber at the net, and Rask will do his job. However, when outshot, the Bruins’ win percentage plummets faster than a roller coaster, to an abysmal .286%, a percentage which leaves the Bruins at 27th in the league. The bottom line is, when the defense breaks down, the Bruins have trouble winning games. Plain and simple.

While the Claude Julien tinkers with line combinations, the Bruins top scorers are not getting the job done. While Reilly Smith and Brad Marchand (with seven and eight goals scored respectively) lead the team in goals and Patrice Bergeron continues to move the puck like a certain point guard who also calls the TD Garden home, not too many other options have presented themselves as feasible. While Carl Soderberg continues to impress and Dougie Hamilton shows off his power play capabilities, the Bruins don’t have many places to turn for offense. David Krejci has played a near point-per-game level, yet he has struggled to stay on the ice due to injuries (does anyone else sense a theme here?). Milan Lucic has disappointed, as he has quadruple the penalty minutes as he does points. Peter Chiarelli hasn’t found a top replacement for Jarome Iginla, and Loui Eriksson’s play hasn’t inspired many to jump for joy. While the offense needs a spark, Eriksson has a tendency to look timid at times. In order to be feared as a unit, since the Bruins don’t have a Vladimir Tarasenko human-highlight reel player, the Bruins need to rediscover their offensive prowess.

We aren’t talking about re-inventing the wheel here, just simple hockey. Keeping the feet moving in the defensive zone to create chaos and getting up ice to take the body are key parts to wearing down the opponent. Once possession has been established, the Bruins can do what they have done so many times, use quick passing and smart decision making to score their goals. This team isn’t supposed to weave through five guys, score top shelf where Gramma hides the cookies, and be number one on Sportscenter’s top plays. Goals like this will suffice just as well:

What else can the Bruins do to stop their current slide? Comment below with your take.

19 thoughts on “What’s Wrong With The Boston Bruins?”