In a follow up to Wednesday’s piece, where I criticized the notion that Canadians will be disinterested by this year’s NHL post-season due to absence of a Canadian market for the first time since 1970, I present today’s argument as to which one of the 16 American teams fans of the seven Canadian teams should send their support for.

If there’s one team all of Canada might care to back, it’s the Dallas Stars.

Dallas finished the season 50-23-9, atop the Western Conference. No team scored more goals than they did–267, to be exact, 15 greater than the President’s Trophy-winning Washington Capitals who finished second in goals for with 252.

The Stars’ lineup boasted three 30-plus goal scorers and five 50-plus point getters. On most nights, the offense helped bail out a goaltending tandem of Kari Lehtonen and Antti Niemi, who split the season sporting nearly-identical poor save percentages of .906 and .905, respectively. This though added to the regular excitement. Not many people were calling for bigger nets in the Stars’ 48 games with six or more combined goals scored. Their ability to play in back-and-forth games, with lead changes and maybe a goalie controversy (or, two) makes them a fun watch this playoff year.

But here’s a reason why each of the fan bases for the seven Canadian teams should find their nearest belt buckle and strap on some green and white.

Perhaps no Canadian fan base (and executives) will be cheering harder for Dallas than the Flames. Why? Kris Russell.

The deadline day deal that sent Russell from Calgary to Dallas in exchange for defenseman, Jyrki Jokipakka and prospect Brett Pollock also included a conditional 2016 second round pick. The condition being if Russell plays in at least 50 percent of Dallas’ games and the Stars make it to the conference finals, the pick becomes a first round selection instead.

Since arriving to Dallas, Russell has added four points in 11 games. He missed seven of the Stars’ final 18 games of the season with a foot injury, but played in the final two games of the season. He’ll be a big factor for the Stars’ back end if they do in fact reach the conference finals. His shot-blocking style leaves him vulnerable at times, but it’s highly-coveted this time a year, which might explain why Stars’ general manager Jim Nill paid such a hefty price to acquire him. Nonetheless, fans back at the Saddledome can identify with the Texans this playoff year. It certainly makes it easier when draft implications are on the line. 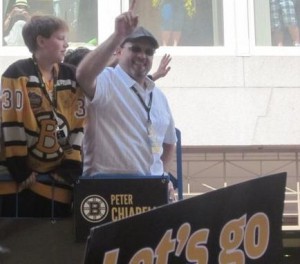 For years we’ve been saying that things are looking up for the Edmonton Oilers, only to return at the end of April and ask ‘what went wrong this time?’ Connor McDavid was an excellent reward for all the suffering, but we shouldn’t forget the add of GM Peter Chiarelli.

Chiarelli’s tenure in Boston saw him build a physically-intimidating and skillful teams that by 2010 were regular contenders for the Stanley Cup. The Bruins qualified for the playoffs in seven of nine seasons as general manager, the only two misses coming in his first season in 2006-07 and his final season with the team in 2014-15.

Chiarelli was fired by the Bruins a year ago and to many the view was met with harsh criticism, suggesting that ownership overreacted to one poor season. It only took him nine days to land the same position in Edmonton, and for good reason. Among the greatest highlights in his tenure with the B’s includes the drafting of Milan Lucic in 2006 (50th overall), the free agent signing of Zdeno Chara and the hiring of head coach Claude Julien, who this year became the winningest coach inf Bruins’ franchise history.

One move that people in Bean Town might still harbor ill-will toward Chiarelli though is the trading of Tyler Seguin in 2013. While the deal that sent Phil Kessel to the Maple Leafs in exchange for two first round picks (one of which being Seguin) and a second round pick will be fondly remembered, it is easily lost in the fact that Seguin lasted just three seasons before being labeled a problem child and shipped out for what can now be considered an underwhelming package of Loui Eriksson, Reilly Smith, Joe Morrow and Matt Fraser.

I don’t know if reliving that fiasco makes Oiler fans more on edge with the summer approaching and the team possibly shopping the likes of Ryan Nugent-Hopkins or Jordan Eberle, but it was a reason Chiarelli became available a year ago and hopefully he’s learned from that experience. Edmonton certainly needs to maximize on their return.

If that’s not enough for Oiler country to root for the Stars, why don’t I provide this, a clip from Jan. 4, 2007. You know, that one where former first overall pick Patrik Stefan became an instant YouTube sensation, when he fell and missed the empty-net. Longtime Oiler and current Star Ales Hemsky scored the late game-tying goal, too. He is coming off his best season since 2010-11 with Edmonton and could give you another reason to root for Dallas.

Fans in Montreal probably just want to forget the NHL existed in 2015-16. Nope. What’s that? Never even happened.

After winning nine-straight and recording points in 20 of their first 24, the Canadiens fell, hard. They lost 22 of 28, were outscored 89-52 and failed to win back-to-back games. It was one of the greatest falls from grace in recent memory. Sitting comfortably atop the NHL standings in first place on Dec. 1, the Habs plummeted to two games below .500 on March 28, the same day they were eliminated from post-season contention.

Why am I telling you all of this?

Imagine how painful this would all seem if the Bruins held onto Tyler Seguin? In 21  career games versus Montreal he has 19 points. Just stop and think what a menace it would be to go up against him five to six times a year. Second, think of the already young talent in Buffalo, Florida and Tampa. It’s on its way in Toronto and could be bolstered by a top-three pick at June’s entry draft. Montreal has done a good job adding youth from the draft, they have picked in the first round every year since 2009, but have only picked inside the top-five once–2012 when they drafted Alex Galchenyuk.

It’s fair to say that for the tormenting season it was for Habs’ fans, they probably could use this pick to help replenish a prospect pool that is lacking. But thankfully they don’t have to deal with the Bruins, who did some things to help fill its cupboard at last year’s draft, but are still a work in progress.

Simply, Seguin is in Dallas–not Boston. And if Loui Eriksson is gone on July 1, only Joe Morrow is left from that 2013 deal. Isn’t that enough?

If it’s not, remember that Dallas traded Michael Ryder to you for Erik Cole.

This one should be a simple sell.

For whatever you think of his exit from Ottawa in 2014, he was one of the best players in the franchise’s history. He was rarely injured, he was an ambassador to the community and a representative of the Canadian capitol in an 11-year tenure with the Sens. Even if he did force his way out of Ottawa in the end, it wasn’t anywhere close to the way Dany Heatley did in 2009.

At 32 he is coming off his third-consecutive 60-point season and eighth in his career. He’s twice been to the conference finals and once to the Stanley Cup finals, in 2007 when the Senators lost in five games to Anaheim. He has 52 points in 56 career post-season games, and in the absence of Tyler Seguin to start round one, he’ll be asked to be an even greater contributor.

An Ontario boy–a former Senator and one-time captain, doesn’t he deserve a date with the Stanley Cup?

This one might not be entirely exclusive to Maple Leafs fans. In fact, this could be enough reason for all of Canada to rise up and cheer on Dallas when they open the playoffs on Thursday, but it’s also a bit of a stretch. Here goes nothing.

Let’s think of the Stars as the hockey version of Major League Baseball’s Toronto Blue Jays.

This season the Stars produced offense like clockwork, even in spite of rather pedestrian goaltending and some depth issues on defense. They managed a 50-win season because their offense was that good. They outscored opponents by three or more goals in 17 games. Their 3.23 goals per game was tops in the NHL. They also finished top-two in goals per period for each individual period. The only thing separating them from a true contender is true number one goaltending.

Dallas often reminded me of the 2015 Blue Jays, who miraculously won the AL East for the first time since 1993 and advanced to the post-season where they lost in six games to the eventual-World Champion Kansas City Royals. The Jays had offense–lots of it, boasting three of the league’s top-ten home run hitters in AL MVP Josh Donaldson, right fielder, Jose Bautista and infielder/designated hitter Edwin Encarnacion. The same three were among the top-five leaders in RBI’s for the 2015 season. They helped Toronto lead all of baseball in runs scored–and it wasn’t even close. The Jays’ 891 total runs were 127 more than the second-scoring New York Yankees.

Where they struggled though was on the bump, where the organizational lack of pitching depth made them among the top teams in surrendering homers and near the bottom in strikeouts. They added David Price at the deadline, who helped immensely before leaving in free agency to sign with the rival-Red Sox.

It might be comparing apples to oranges, but the top heavy Stars with a blistering offense coupled with mediocre goaltending might be remind some of that Toronto team from 2015. And maybe they’ll pause from watching them to appreciate the Stars’ run this post-season.

Aside from the Benn brother’s parading the cup around Victoria, B.C., there’s not much to offer fans in Vancouver.

One reason for that was the trade deadline, where Nill opted to trade for Russell over the Canucks’ Dan Hamhuis. Ultimately,the  pending unrestricted free agent defenseman was unable to be traded by Vancouver GM Jim Benning.

It’s unclear what might have come back in a Hamhuis package, but it certainly wasn’t going to be anything like what the Flames were able to fetch.

Fans in Vancouver are probably excited for this season to finally be over, but let’s remember what that means–Benning can start fielding more calls. Historically, that hasn’t worked well. Since I know you’re hardly convinced, here’s a GIF of Benning that might cheer you up–but probably not.

Again, I can’t really offer much to Jets fans, either. Yes it would be nice to have Manitoba’s Patrick Sharp win the cup and bring it home–but that would be cup four in seven years. Yawn.

Let’s talk instead about Andrew Ladd. Ladd, who was acquired by the Blackhawks prior to the trade deadline helped haul a pretty nice return which included Marko Dano (previously acquired by Chicago in the Brandon Saad deal), a conditional third round draft pick in 2018 and the Blackhawks’ 2016 first round pick. You don’t need me to tell you the implications of it all, but the further Dallas goes, the further Chicago doesn’t–which eventually equates to a much better draft pick. If the two teams meet in the second round, Jets’ fans might want to be rooting for the draft implication–even if the conditional third in 2018 is contingent on a Hawks’ cup victory.