On Friday night, the Wilkes-Barre/Scranton Penguins were without one of their top scorers, Chris Conner, who was called up to Pittsburgh earlier in the day. Harry Zolnierczyk was also still with the big club.

However, that didn’t slow the Pens down.

The duo of Brian Gibbons and Jayson Megna teamed up on two goals and Jeff Deslauriers made 22 saves to stay perfect as the Pens defeated the Adirondack Phantoms by a score of 6-3 on Friday.

The two teams scored three goals in the first five minutes of the contest. Megna kicked things off just 1:08 in the game, with Gibbons getting the primary assist. But the Phantoms struck back a minute later on a Bruno Gervais goal.

However, at 4:52, Tom Kuhnhackl, who is looking for a comeback year after missing most of 2012-13 with a shoulder injury, scored his first goal of the season. The opening frame also featured a fight between Adam Payerl and Steve Deslile.

Before the end of the period, the Pens had two other chances to score. Megna came close to scoring, but the Phantoms swatted the puck away before it could get past goalie Cal Heeter. Nick Drazenovic took another shot at 12:50, but the puck rang off the post. The period ended with the Pens holding a 2-1 lead and 16-7 advantage in shots.

In the second period, Paul Thompson and Rob Bordson got in a brief wrestling match, but the Phantoms got the power play, as Thompson was called for roughing and boarding. But at 2:46, Brandon Manning was called for slashing to give the man advantage back to the Penguins. Forward Bobby Farnham was thrown to the ice at about 30 seconds later, but there was no call.

With about five minutes gone by in the second, Payerl scored his first of the season with defensemen Philip Samuelsson and Simon Despres getting the assists. Despres was in the box for interference at 9:14 when Megna scored his second of the game to give the Pens a 3-2 lead and their third shorthanded goal in as many games. Gibbons again received an assist on the goal.

The Phantoms responded by jumping Penguins players in the corner boards near the Pens’ attack zone. Manning and Scott Harrington were sent off for matching 10-minute misconducts for continuing the altercation, while Gibbons and Maercel Nobels were sent off for slashing minors.

Adirondack answered back to cut the Pens’ lead in half to 4-2 on Nick Cousins’ goal, his second point of the evening. Despite this, the Phantoms did not reach the double-digit mark in shots goal until more than halfway through the game.

Pierre Luc Letourneau-Leblond and Zack FitzGerald tangled in the Pens’ zone with about five minutes to go. Leblond held the clear advantage, as he landed several uppercuts and nearly took FitzGerald off his skates. Both players received the five-minute fighting major as well as two-minute calls for removing their helmets before the fight. This is a rule change that went into effect in the NHL this season. 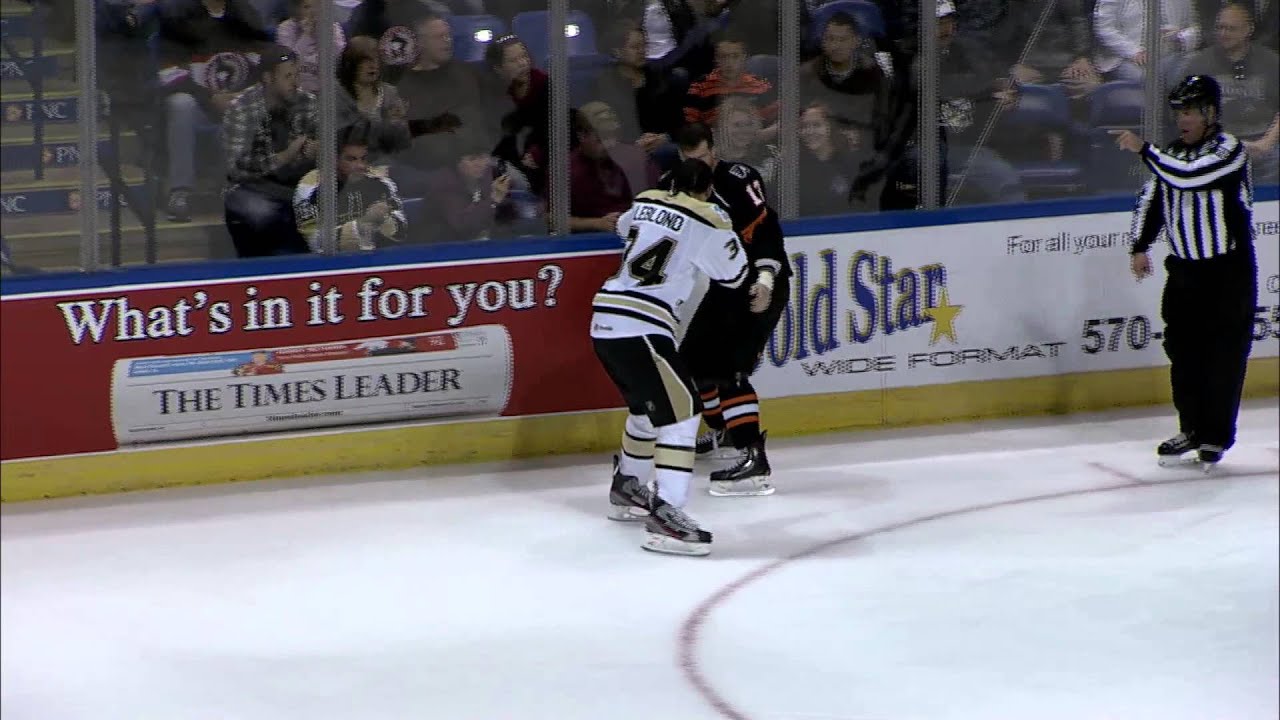 WBS nearly scored again at 15:28, but the goal was waved off because of a hand pass. The second period ended with the Pens still up 5-2.

The third period was a change of pace after some of the physical confrontations that had taken place earlier in the game. Still, Gibbons added a goal for his third point on the night while the Pens were on the power play at 10:08. Andrew Ebbett picked up his second assist, and Thompson also chipped in.

Gibbons posted identical 30-point campaigns in 2012 and 2013, but he is already off to a hot start with seven points in the team’s first four games. In an article in Breakaway, the Penguins’ game program, he said he was looking forward to getting even better now that he had some experience under his belt.

“I feel like towards the end of last season was the best I have played as a pro,” Gibbons told the article’s writer, Russ Hryvnak. “I just tried to build on that in the offseason and continue it into the start of this year.”

Rob Bordson scored for the Phantoms at 18:06, but by then, it was too late for Adirondack to pull out a miracle comeback.

When asked about the Pens’ hot start on Tuesday, head coach John Hynes was quick to credit his players for working together as a whole rather than relying on individual starts.

“It’s not just the wins, though,” Hynes said. “It’s the fact that we’ve played good hockey and guys have played to their identity. It wasn’t like we were carried by one or two guys and it’s like OK that’s the automatic player, so any time you win, all the players look better and everyone looks in a better light which is important for them. And then it came down to how we won the games, and we played pretty good team games and had a lot of good efforts.”

That said, he told Tom Venesky of The Times Leader that an undefeated start to the season is no time to take it easy.

“It’s not based on wins and losses; the pressure is to get better,” Hynes pointed out. “If we were 0-3, we would’ve approached this week the same way. It’s about building our habits and the foundation that will give us a winning season.”

Three Stars of the Game

Simon Despres went down with about 35 seconds remaining in the second period and got off the ice on his own power. He looked to be limping and took his time getting back to the bench, but returned in the third period.

The Penguins are now 4-0 on the season, their best start since the 2010-11 campaign, and will hit the road for the rest of the weekend. They will face the Worcester Sharks on Saturday and the Manchester Monarchs on Sunday.

The Phantoms, meanwhile, are on a four-game losing skid and have not won since they opened the season against the Hershey Bears on October 5. They will go back to Glens Falls to face the Springfield Falcons, who are also at 4-0 after beating the Providence Bruins 5-2 on Friday.