For much of Tim Thomas’ run as the starting goalie for the Boston Bruins, many people wondered how long it would be before the team’s top prospect, Tuukka Rask, would take over in net. Thomas’ performance kept Rask at bay for a number of years, but last season Thomas’ took the season off and Rask was thrust in the starting role, a role in which he was very successful. Tuukka’s success coupled with his long-term contract extension over the summer quelled any discussion of goalie prospects. That silence wouldn’t last long, as the starting goaltender in Providence made a statement right out of the gates this fall. Niklas Svedberg, the AHL’s Aldege “Baz” Bastien Memorial Award winner for most outstanding goalie last season, came into camp determined to leave his mark on the front office and the coaching staff. He certainly earned more respect with the big club in the preseason, but he was relegated to Providence as Chad Johnson won the backup goalie job. Despite a depleted defense corps (from last season to this season), Svedberg has been on fire to start this season. The team has remained undefeated in regulation in games that Svedberg has started and he has improved on his very impressive save percentage from last season. So what’s next for Svedberg and how will the Bruins proceed?

Leave Him in Providence

The first possibility for the Bruins would be to leave Svedberg in Providence. The biggest positive to this plan of action is that it would allow Svedberg to get the maximum amount of playing time, albeit at the AHL level. With defenseman Matt Bartkowski and Torey Krug leaving after last season, Providence is not as strong on the back-end, which makes the challenge quite a bit greater in the AHL. In spite of that challenge, Svedberg has looked like a man possessed in Providence, leaving some to question whether or not he has much left to prove at this level. Another benefit of having Svedberg in Providence, is that he provides insurance in case of an injury to Rask or Johnson, a luxury that would be sacrificed if the Bruins were to call up Svedberg and waive Chad Johnson. Aside from the lower level of competition, the biggest drawback to this strategy is that it has the Bruins suiting up a lesser goalie behind Tuukka Rask. Chad Johnson is a serviceable veteran, but at this point, it’s hard to argue that Niklas Svedberg is not the superior goaltender. Additionally, Svedberg is set to become a restricted free agent this summer, so stashing him in Providence may not buy the Bruins any good will for the upcoming negotiations.

Call Him Up and Make Him the Backup 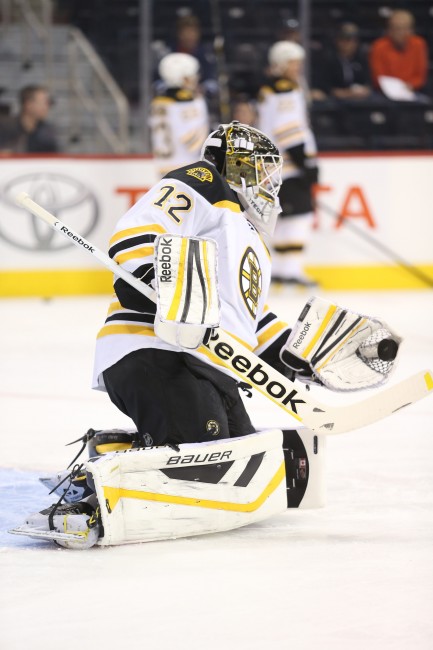 If the Bruins decide that leaving Svedberg in Providence is not the best option, the most likely scenario would be to give Svedberg the backup job behind Tuukka Rask. In terms of the salary cap, this would likely require Rask’s current backup, Chad Johnson, to be exposed to waivers. If Johnson were to be claimed, it would leave the organization shorthanded in net. This would cause a number of problems, the biggest of which would be having rookie Malcolm Subban third on the depth chart and only an injury away from a spot on the NHL club. The organization is high on Subban, but not to the point that they want him seeing time in the NHL this season. Another drawback here is that it would limit the amount of ice time that Svedberg would get, which would be counterproductive in the development process. That’s not to say that this approach is all negative. It would provide Svedberg with NHL experience, and in the process give the Bruins a far superior goaltending tandem. By giving Svedberg an opportunity on the NHL roster, the team would be able to build a stronger relationship with the player, making it easier to retain his services beyond this season. Although trading Svedberg does not appear to be the team’s top priority, showcasing him in the NHL would give him a chance to improve his trade value and potentially earn himself a starting gig on another team.

As is the case with most prospects, the possibility of a trade is always prevalent. In the case of Niklas Svedberg, this is the least likely scenario. Svedberg is a high quality goaltender that is providing the Bruins with an elite insurance policy at time when goaltending is at a premium. At the moment, there are at least six NHL teams without their starting goaltender due to injury. Many of these teams are struggling to stay above water because the limitations of their backup goalie. The Bruins are certainly hoping that injuries stay out of the equation, but if unfortunate circumstances arise, the team will be grateful for the opportunity to plug in Niklas Svedberg. In Providence, Svedberg is providing a good bridge to the Malcolm Subban era, and making the team a serious contender along the way. Although Svedberg provides insurance in net in case of injury, he also provides the team with a valuable asset that could help them fill a hole on their roster as they get closer to the playoff push. Despite having far less experience, Malcolm Subban is likely more valuable via trade, keeping Svedberg secure in the Bruins organization.

While the Bruins have plenty of options when it comes to handling Niklas Svedberg, the smartest choice for the team is to hold onto him and keep him in Providence. The team currently has a surplus of forwards and defensemen fighting for spots on the team, meaning that roster depth is not currently an issue. Trading Svedberg would be more of a long-term move than a short-term move, and giving up prospects for prospects is not too common in the NHL. Although Svedberg would make a very good backup, playing regularly will better prepare him for an emergency call-up this season or a bigger role in the future. With Svedberg in net, Providence is more competitive, giving them a better shot at a lengthy playoff run, which helps with player development throughout the organization. Based on his performance last year and through the first month of this season, it is safe to say that Niklas Svedberg has a bright future ahead of him, hopefully with the Boston Bruins.