It has been 35 years since the Philadelphia Flyers have marched down Broad Street with Lord Stanley’s Cup.  Sure, there have been some great seasons where the team has come close.  They have been to the Stanley Cup Finals 5 times, and the Conference Championship an additional 5 times.  This is a successful franchise that is always competitive….well, except for the disaster in 2006-07.  After the team’s surprise trip to the Conference Finals in 2008, the team took a step back in 2009.

General Manager Paul Holmgren, and part-owner Ed Snider both felt several ingredients were missing from that 2009 team, grit, toughness, experience, leadership and most importantly, a desire to win at all costs.  During the off-season, the team went out and found all these ingredients in one big 6’6 215 pound package.  His name is Chris Pronger, and he has the distinction of being the guy that is to deliver Philadelphia that long sought third Stanley Cup Championship.  How is that for pressure?

The thing is, Chris Pronger can handle this pressure and probably welcomes it.  He spent one year in Edmonton and took them to the Cup Finals.  He was traded to the Anaheim Ducks the following season and again led his team to the Cup Finals, this time emerging as the winner.  The Flyers gave up a lot to obtain Pronger; Joffrey Lupul, young defenseman Luca Sbisa, andtwo first round draft picks.  The Flyers were willing to give all this because they believe Pronger is the missing piece.  As a rabid Flyers fan, I hope they are right!

Chris Pronger began playing hockey with his older brother Sean in his hometown of Dryden, Ontario.  By the time he was 15 years old, the hockey world was beginning to notice his skils, and his ever growing size.  He joined the Stratford Culitons Jr. B Club for the 1990-91 season.  Pronger made his move to junior hockey at the age of 17, however, that was not his initial intention.  Older brother Sean was playing college hockey at Bowling Green University and Chris expressed his desire to join him.  Willing to take the risk, they believed he was that good, the Peterborough Petes of the OHL still drafted Pronger 6th overall.  Eventually, Chris decided he would play Canadian Junior Hockey and joined the Petes.

His combination of size andscoring ability led to great success with the Petes.  In his first season in the OHL, Pronger led the league in scoring for a defenseman with62 points in 63 games.  The following season, 1992-93, he would be even better.  As with any teenage player, Pronger was learning how to use his size to his advantage and in addition to his offensive contribution, he became a top defender as well.  Pronger scored 77 points in 61 games and then added another 40 in 21 playoff games while leading his team to the Memorial Cup Finals.  Pronger was named a First-Team Allstar for the 1992-93 season.

Pronger also was given a taste of international competition, playing for the gold medal winning Team Canada in the 1993 World Junior Championships.  Pronger would provide a tremendous defensive presence and also added 4 points in 7 games.

After two outstanding seasons in the OHL, Pronger entered the 1993 NHL Entry Draft and was chosen 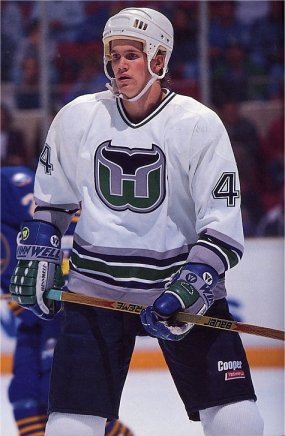 with the 2nd overall pick by the Hartford Whalers.   Many reading this may be wondering who was picked before Chris Pronger? Well, on draft day the first overall pick made this comment, “I’m glad I got drafted first cause no one remembers number two!”  I am sure Alexandre Daigle would love to have that comment back.

Pronger jumped immediately to the NHL in the 1993-94 season playing 81 games with the Whalers scoring a very respectable 30 points and earning a place on the NHL’s All Rookie Team.  Unfortunately for Pronger, the Whalers were looking at him as the saviour of a franchise that was continuously losing money.  After missing the playoffs in Pronger’s first two years, the Hartford Whalers, feeling they did not have the luxury of waiting for a young player to develop, decided to trade Pronger to the St. Louis Blues for Brendan Shanahan.

Being traded for a huge fan favorite is not always the best way to make a debut in a new city.  It took the fans of St. Louis some time to warm up to Pronger.  The organization had a lot of confidence in him, however, signing him to a contract extension shortly after his arrival.  During his second season with St. Louis, his 4th in the NHL, Pronger began to show why he was drafted 2nd overall in the draft.  He played like a wiley veteran, he scored 35 points and showed improvement in the defensive side of the game going from a -18 in 1995-96, to a +15 in 1996-97.  He had finally won the fans over and was named team captain in 1997, serving as such until 2003.  Being named captain inspired Pronger, and he started becoming the dominant defenseman everyone expected him to be with 36 points and an amazing +47 in the 1997-98 season.

From the 1998-99 season through the 2001-02 season, Pronger was one of, if not the best, defenders in the league, winning the Norris trophy as the league’s top defenseman  in 2000 with 62 points and a +52 during the regular season, and 47 point in only 51 games during the 2000-01 season.  Pronger would also be awarded the Hart Memorial Trophy as the league’s Most Valuable Player in 2000.  Following an injury shortened 2002-03 season in which Prongerwas limited to only 5 games, he returned with another strong performance in the 2003-04 season.  He didn’t realize it at the time, but it would end up being his last season in St. Louis.

Once the NHL returned from the 2004-05 season lockout, a salary cap had been implemented, causing many teams to look for ways to dump salary.  St. Louis, with the team being up for sale, was one of those teams and Pronger would be the victim.  The Blues traded Pronger to the Edmonton Oilers for defensemen Eric Brewer, Jeff Woywitka and Doug Lynch. The Oilers signed Pronger to a five-year, $31.25 million contract.   However, Pronger would only last one season in Edmonton.

That one season would be a memorable one, however.  Pronger continued to display his suffocating defense, stellar offense (56 points), aggressive and sometimes dirty play and led the Oilers to the Stanley Cup finals, losing to the Carolina Hurricanes.

The following season Pronger was again traded, this time to the Anaheim Ducks for Joffrey Lupul, defensive prospect Ladislav Smid and several draft picks, one of those picks being contingent on the Ducks reaching the Stanley Cup Finals in three years.  The Ducks would not have to wait three years.

Prongercontinued to dominate in 2006-07, his first with the Ducks, scoring 59 points in 66 games, adding a +27.   The team set franchise records for wins and points.  In the playoffs, Prongerwould add 15 points in 19 games, second on the team, while for the second straight season he led his team to the Stanley Cup Finals. This time, however, the result would be different.  Pronger fulfilled the dream of all young Canadian born hockey players and took a sip from Lord Stanley’s Cup.

After two more successful seasons with the Ducks, Pronger was traded to Philadelphia.  The Flyers organization, and its legion of fans are hoping that, similar to Pronger’s debut seasons with his previous two teams, there will be a trip to the Stanley Cup Finals this year.  If his career is any indication, Pronger is definitely up for that task!

“Ok, maybe that last one is just my wishful thinking as a Flyer’s fan!!!”

For Pronger’s career stats, refer to The Internet Hockey Database

3 thoughts on “Will Chris Pronger Bring the Cup to Philly??”