The Windsor Spitfires have won the 2017 MasterCard Memorial Cup and they did it in history-making fashion… again.

Aaron Luchuk scored five minutes into the third period as the Spitfires defeated the Erie Otters in the championship of the 2017 MasterCard Memorial Cup. Windsor becomes the first team in CHL history to win the Memorial Cup after losing in the first round of the playoffs.

Before the doors even opened, fans lined up outside the WFCU Centre, both outside the box office and in the community rinks. They were eager to get a taste of the action. The last time these clubs played, Windsor skated away with the 4-2 win. Tickets for the final were sold out well ahead of time and it became the hottest ticket in town. Fans weren’t disappointed. 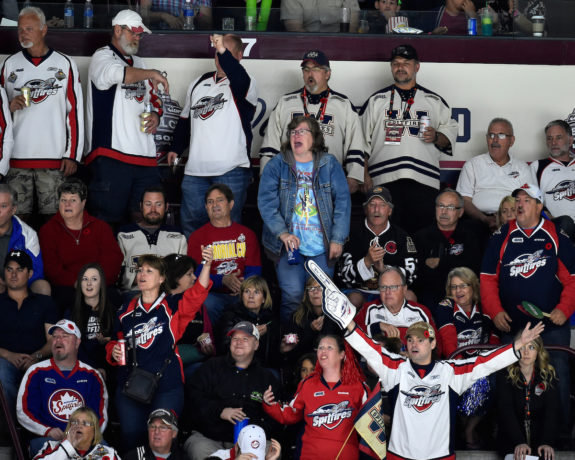 Spitfire fans on the edge of their seats during the championship game at the 2017 MasterCard Memorial Cup at WFCU Centre in Windsor, ON on Sunday May 28, 2017. Photo by Aaron Bell/CHL Images

Living Up to the Hype

The two teams went toe-to-toe in the first period, not only creating scoring chances, but getting acrobatic saves. Spitfires’ goaltender Michael DiPietro and Otters’ goaltender Troy Timpano knew that one mistake could be the difference. They each made highlight-reel saves to keep their teams in it, while keeping the fans on the edge of their seats.

Before the period would end, though, the teams found a way. At 16:07, Timpano went for a loose puck near the crease. Spits’ forward Jeremy Bracco got to it first and slid it under Timpano to give Windsor the 1-0 lead.

Less than a minute later, the Otters responded with authority. Dylan Strome took a pass in the slot and promptly put it blocker side on DiPietro. We were tied up at one after 20 minutes.

Erie found themselves on the power play four minutes into the second period. With seconds left on the man-advantage, Warren Foegele put it home at the top of the crease. They went to view review and it was deemed acceptable. Erie was up 2-1. Windsor was also down for the first time in the tournament. 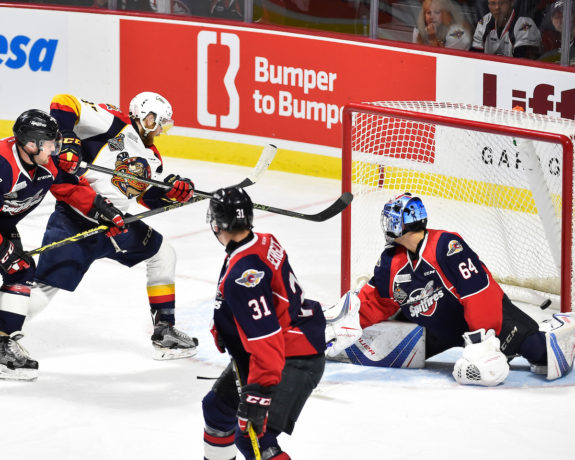 Otters’ Warren Foegele (37) scores during the championship game at the 2017 MasterCard Memorial Cup at WFCU Centre in Windsor, ON on Sunday May 28, 2017. Photo by Aaron Bell/CHL Images

The celebration didn’t last long, though, as Logan Stanley put it on net a minute later and beat Timpano. We were back to square one, tied up at two.

The teams exchanged goaltending shows for the several minutes, but the offence took over to finish the period. At 12:41, TJ Fergus put a shot into the crowd and it found its way past DiPietro. Erie was up 3-2. Two minutes later, the Spitfires went to work on the power play. Gabriel Vilardi spotted Graham Knott at the top of the crease. A quick pass and Knott made it count. That’s how the second period ended, tied up at three.

Five minutes into the third period, the duo of Bracco and Luchuk sent the arena into chaos. Bracco took the puck down the wing, found Luchuk streaking behind three Otters, and Luchuk buried it glove side on Timpano. Windsor was up 4-3. Could they hold the lead, though?

With the clock ticking down, Erie threw everything they could on DiPietro. He stood tall, forcing Timpano to equal him at the other end. The Otters pulled Timpano with a few minutes left, hoping to find that last-minute magic. They found a post with under two minutes to go, but no goals.

The clock counted down, fans gave a standing ovation and Windsor celebrated a 4-3 win to capture the 2017 MasterCard Memorial Cup. 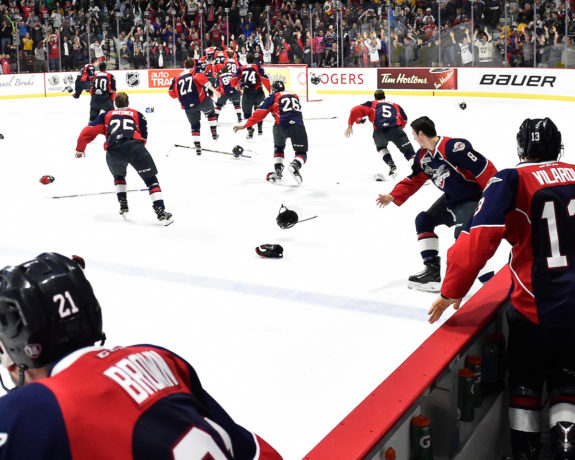 Windsor Spitfires celebrate winning the 2017 Mastercard Memorial Cup at WFCU Centre in Windsor, ON on Sunday May 28, 2017. Photo by Aaron Bell/CHL Images

It’s Windsor’s third cup in team history and first since back-to-back titles in 2009 and 2010. It’s also the second time Windsor has made history at the tournament. In 2009, they became the first team to win the championship after starting the tournament 0-2.

In the off-season, the Spitfires made many moves in hopes of getting to this point. Even with those moves, though, the team had a strong core of players that had been around for multiple seasons. Luchuk was one of those players. He has seen a lot of ups-and-downs in his three seasons with Windsor and said this was amazing.

“For me, being here when we finished last in the Western Conference (with) guys like (Logan) Brown, (Logan) Stanley, (Jalen) Chatfield, (Cristiano) DiGiacinto … to come out like this and end a lot of guys careers with the championship is special,” he said.

One of those key moves in the off-season was defenceman Austin McEneny. He came in from the QMJHL and gave the team much-needed minutes. He said this was beyond his expectations.

“It’s such a close group of guys and we just came together,” McEneny said.

“I didn’t expect anything even close to this. I didn’t know what was going to happen and this is the best situation that could have happened to me.”

After the game, Otters’ forward Dylan Strome was named Memorial Cup MVP. He led all players in the tournament with seven goals and four assists for 11 points in five games. The CHL also named the Memorial Cup All-Star teams and award winners.

Prior to the Memorial Cup, veteran Cristiano DiGiacinto told fans at a rally that “we’re not here to take part. We’re here to take over.” Mission accomplished.

Take a look at this clip of the Spitfires winning the title: