To be the best, you have to beat the best. The Winnipeg Jets couldn’t beat the best on Tuesday night. Despite playing decent-to-good hockey for the majority of their game against the Tampa Bay Lightning, they left Amalie Arena with a lopsided 5-2 loss due to lapses they couldn’t afford to make against the league’s best team.

Nearly every time the Jets made a minute miscue, the Lightning capitalized with a chance or a goal. It shows how meticulously a team has to mind all its Ps and Qs if they want a chance of besting a lights-out Lightning squad that now has a whopping 51 wins in 67 games. 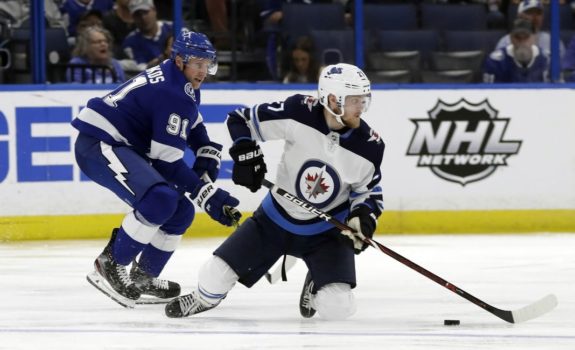 Almost every time the Winnipeg Jets made a small error on Tuesday night against the Tampa Bay Lightning, the home team capitalized with a scoring chance or goal.  (AP Photo/Chris O’Meara)

The Lightning’s second-period goal, which put them up 2-1 and marked the beginning of the end for the Jets, is a perfect example. Tyler Myers made a split-second decision — just one of the hundreds he makes over a 60-minute hockey game — to jump in on the rush, hoping to receive a pass from Jack Roslovic. Roslovic opted to shoot instead, but his shot was blocked by Ryan McDonagh and the Lightning quickly transitioned.

The Lightning’s fourth goal early in the third, which basically cemented their victory, is another example. The usually sure-handed Mark Scheifele had his pocket picked by Mathieu Joseph behind his own net. Less than two seconds later, the puck was in the back of the net courtesy of a Cedric Paquette top-shelf wrist shot.

Last month, we explored how the Jets’ penalty issues during their difficult four-win February — especially infractions of the selfish, unnecessary variety — were a big contributor in their struggles.

Related: Jets Must Divert Flight Path Away From Penalty Box

The team’s lack of discipline reared it’s ugly head again on Tuesday night and gave the Lightning’s potent power play (operating at an NHL-best 29.3 per cent) four chances to work. 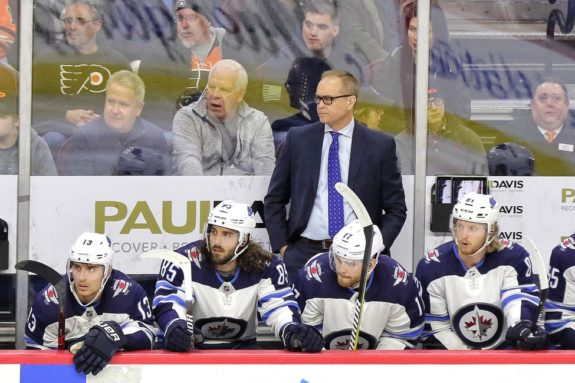 The Jets’ lack of discipline, which was a contributing factor in their frustrating February, re-emerged against the Lightning. (Amy Irvin / The Hockey Writers)

The Jets had a successful kill late in the late first after Brandon Tanev was sent off for slashing. However, given the Lightning’s arsenal consisting of Steven Stamkos, Nikita Kucherov, and Brayden Point (the three have a combined 109 power-play points in 2018-19), you can only poke the bear so many times before it bites you.

With the Jets seeking an equalizer after Erne’s goal, Andrew Copp took a careless offensive-zone holding penalty that gave the Lightning an opportunity to extend the lead. Just 23 seconds later — after Laurent Brossoit was forced into the crease while Hellebuyck left for repairs to his leaking forehead after taking a puck to the mask — Stamkos scored a one-time rocket from his usual spot.

The Lightning added another power-play goal to stretch their lead to 5-1 after Dmitry Kulikov slashed Cedric Paquette after the Lightning forward took him to the boards.

Cedric Paquette once again runs Dmitry Kulikov through the boards, and the #NHLJets defenceman gives him a hefty slash right in front of the referee. Another power play coming up for Tampa, up 4-1 with 10:53 left.

While calling the slash “hefty” as Mike McIntyre did, might be a bit of an exaggeration, Kulikov committed the infraction right in front of the official and it was retaliatory, hence the easy call.

Loss a Reminder of the Importance of Conscientiousness

The Jets should not simply forget about this game and move on to the next one. Rather, they should take it as a lesson on in importance of conscientious and careful play, which is how they will want to play come playoff time.

In a short seven-game series there’s no room for even the smallest lapse: every mistake is magnified, every decision bears meaning, and one bad pinch or one “free pizza” can mean the difference between moving on or going home. 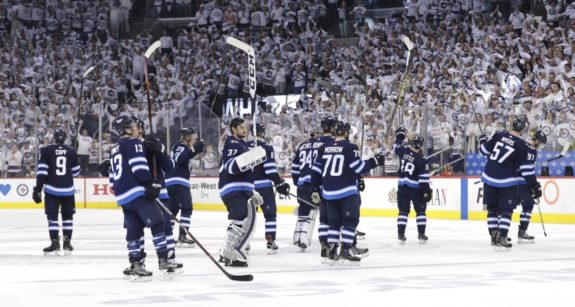 There is no room for small lapses in the playoffs for a team entertaining dreams of Stanley Cup glory. (James Carey Lauder-USA TODAY Sports)

The Jets are talented enough to earn wins against lesser opponents even with the mistakes they made versus the Lightning. However, come playoff time, there are no lesser opponents, just peers vying for the same top prize.

The Jets won’t face many lesser opponents throughout March, either: they wrap up their eastern road trip with games against the Carolina Hurricanes and the Washington Capitals. Then, they’re back at Bell MTS Place for a three-game homestand against the San Jose Sharks, Boston Bruins, and Calgary Flames — three more squads that will require an A-plus, error-free game from the Jets to beat.