Entering league play on March 30, the Winnipeg Jets have just six games separating them from the Stanley Cup Playoffs for the first time since returning to the NHL in 2011. 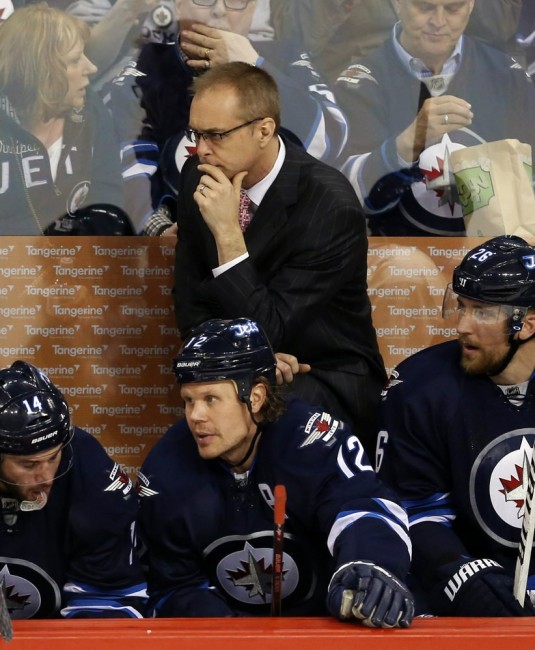 The Jets just need to take care of their own business. (Bruce Fedyck-USA TODAY Sports)

They’ve been in the race for a playoff spot in every season since returning to the league, but have always managed to fall just short of the ultimate goal due to late March/early April collapses. But despite a heartbreaking 4-3 loss at the hands of the Chicago Blackhawks — the first one to them all season — on Sunday, the Jets remain in good shape to make the postseason despite both the Calgary Flames and Los Angeles Kings nipping at their heels.

After 76 games the Jets sit in the final wildcard spot in the Western Conference with 90 points. That’s one more than the Flames and two up on the Kings. While many fans are understandably nervous about the team’s odds, scheduling and divisional battles should help make them breath a little easier going down the final stretch.

With Los Angeles and Calgary in the same division, they are much more likely to knock one or the other out of a playoff spot before doing so to the Jets. They play each other on April 7, which could be the game that decides which of the two teams finish as the third seed in the Pacific Division, setting up a first-round matchup with the Vancouver Canucks. Now, there is a scenario in which the Canucks fall and both Los Angeles and Calgary make it in as the second and third-place division teams, but that’s a whole different conversation.

According to the analytics website SportsClubStats, the Jets current chances to make the playoffs sit at just 62.3% after last night’s loss. However, should both the Kings and Flames lose on Monday night to Chicago and Dallas, respectively, in regulation, the Jets’ odds immediately jump up another 10%. Should either game make it to OT or the Kings and/or Flames win, those chances take a hit.

Winnipeg needs to go at least 4-0-2, which would put them at 100 points, for a 100% chance of getting into the playoffs according to SCS. A record of 4-2-0 is needed to at least give Winnipeg a greater than 95% chance of making the postseason. Anything less than that though, the Jets chances start to get real iffy. A record as mediocre as 3-2-1 drops the team’s chances to just 82%.

It sounds cliche, but the Jets really just need to take care of their own business. With the Kings and Flames playing each other and the Jets closing the season out with games against the Canucks and Flames on their schedule, the ball truly is in Winnipeg’s court to get the job done. So soak it in Jets’ fans, this is going to be a fun home stretch that is sure to be one to remember.