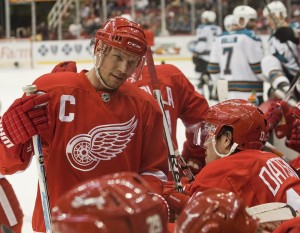 With all signs pointing to the 2013 NHL Winter Classic being hosted by the Detroit Red Wings, and all talk of their opponent pointing at the Toronto Maple Leafs, conversation is beginning to return to where it began when the rumors first surfaced; Where will the game be hosted?  This question doesn’t arise from a lack of facilities for hosting the game, but rather, 2 great venues with plenty of pros and cons to go along with them.

The first of these venues? Detroit’s very own Comerica Park. Home of the Detroit Tigers, the ballpark sits in the heart of the city smack-dab between Ford Field (home of the Detroit Lions) and the Fox Theatre, and just a few miles away from Joe Louis Arena (normal home of the Red Wings).  For an event that encompasses celebration of the cities and heritages on which the game was founded, it’s hard to think of a better place to hold the game than at the center of that storied city. Or is it?

While the city around Comerica has a great deal of history, tales of heartache, and stories of triumph to be shared, the park itself is relatively young. Opened in April of 2000, it wouldn’t be the youngest venue to feature the Classic, but it is considerably newer than Michigan Stadium, which opened back in 1927.

According to Dave Hogg of Fox Sports Detroit, the age of Comerica Park is hardly a limiting factor in its historical value,

“Comerica is still a young stadium, but how many places in this area do a better job of showing off Detroit’s past, present and future?

How about Jimmy Howard making saves on the same spot where Jose Valverde got his, or robbing an opposing scorer at the place where Neifi Perez kept Justin Verlander’s first no-hitter alive, or where Austin Jackson has run down so many fly balls?

After a goal, and maybe a victory, the Red Wings would celebrate at the same place where the Tigers mobbed each other after beating New York and Oakland in 2006 and after so many important victories in 2011’s run to the ALCS.

It wouldn’t just be recent Tigers history, either. Nick Lidstrom would play under the statue of Ty Cobb — more than a century after The Georgia Peach started his Detroit career in 1905.” 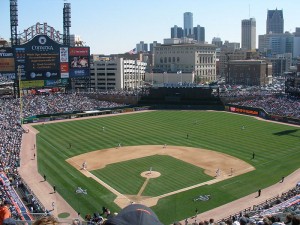 But this isn’t a celebration of baseball meets hockey (granted, 3 out of the 5 Winter Classic’s have been held on baseball diamonds), no,  it’s a celebration of hockey’s history. That’s something that can easily be done outside of the city.

Whether the game is at the epicenter of Hockeytown or not, the same discussions and prerecorded footage can and will take place. The same great stories will be discussed during the intermissions. The mentions of the original 6 matchup will still be sickening. The game will in essence be exactly the same, except for one major factor; Seating capacity.

With only 41,255 available seats in Comerica Park, Michigan Stadium easily puts it to shame. 114,804 – that’s the record attendance for The Big House. When was it set? This past September. The occasion? Why another outdoor hockey game of course!

The Big Chill At The Big House, a game featuring bitter rival schools Michigan and Michigan State drew more people than any other hockey game on record, and it was a college game. In a game set to feature 2 of the NHL’s oldest and most storied franchises with 2 of the largest fan bases in all of professional sports, there wouldn’t be a place left to stand in that stadium.

There are 2 major factors that make seating capacity so important.

The first is the ability for more people to see the game live and in person. The true experience for any Winter Classic is only had when you’re there in the flesh, celebrating your team (win or lose) in the cold open air of January. The sure volume of the stadium would likely mean a few tickets available to the public in some fashion, whether it be lottery or otherwise, and that’s something that wasn’t the case in the game featuring the Philadelphia Flyers and New York Rangers this season.

The 2nd, and likely biggest factor, is money. There’s no question that with both Detroit and Toronto’s rabid fan bases, the game would sell out and then some. New attendance records would be set, and with it, new financial records for the now annual event. Merchandise totals, ticket sales, viewership, it would all go up enormously, likely making it the largest event in NHL history.

With no major drawbacks or losses to holding the game in Michigan Stadium, and several pros in the business sector, it seems almost inevitable that the football field will host its 2nd major outdoor hockey game in 3 years, and lets face it, that’s not a bad thing.

The bottom line is that the NHL is a business, and the decision to hold the game in Ann Arbor (University of Michigan land) both caters to the fans in respect to ability to attend, and to the league in respect to profit returns. Plus, hockey rinks fit significantly better on football fields than on baseball diamonds and offer a better range of vision for both those in attendance and watching on TV. It’s a win-win situation with almost no losses.

One thing’s for sure, no matter where the game is held, it will be an exciting one to watch. It will be good for the city, the state, the team, and the fans – the most important component to this event.

So what do you think? Does the history of the venue matter more than the history of the city, or do neither matter at all? Would the game look better in Michigan Stadium than Comerica park, or vice-versa? Where would you prefer the event to be held, or do you not care?And are you as excited as me to see the likes of Brian Burke, Mike Babcock, and the always hilarious Pavel Datsyuk on HBO’s 24/7 series?