Cleveland is notorious for having the most tragic of events happen to their sports teams. For every positive moment, there is a heartbreaking moment.

Let me take you on a quick walk down Cleveland’s Nightmare Lane.

I’m only covering four unsavory moments because I don’t feel like crying myself to sleep tonight.

The Drive and The Fumble

John Elway and the Denver Broncos were a thorn in the side of the Cleveland Browns for two straight seasons.

During the AFC Championship on January 11, 1987, the Broncos dashed the hopes and dreams of the Browns for the first time. With 5:32 left in the game the Browns were up 20-13 and it seemed as though they would have a shot at winning the AFC. Bronco’s quarterback, John Elway, had other ideas about how this game should go.

Over a span of 98-yards, 15 plays, and 5 minutes Elway and the Broncos managed to score a touchdown forcing the game to go into Overtime. On the first play of overtime, Elway led the Broncos within field goal range where Karlis would kick a 33-yard field goal to end the game.

Fast forward to a year later. The Browns and Broncos are playing in the AFC Championship again. Venues were different but the heartache would remain the same.

After being down most of the game Browns’ quarterback, Bernie Kosar, was able to score 3 touchdowns in the second half to tie things up. This was their shot at winning the AFC Championship. A win was so close they could taste it.

Unfortunately, the Cleveland Curse was in full force that January day as Byner fumbled the ball at the 3- yard line during one of their last drives of the game.

The Cleveland Browns finished the 1994 season with an appearance in the 2nd round of the playoffs. At the start of the 1995 season, they were 3-1 and in first place. Things were really looking up for Cleveland. This would be the year they won the Superbowl, right? Wrong.

On November 6, 1995, Art Modell, or as I lovingly call him “Lord Voldemort”, announced he would be relocating the team to Baltimore at the start of the 1996 season. This, by the way, was the day before the city of Cleveland was to vote on a proposed tax to refurbish Cleveland Municipal Stadium.

Fans came out to the polls in astounding numbers and the issue passed. It didn’t matter. The deal was done.

Hundreds of lawsuits were filed and there was even a hearing held by Congress.

The fight to keep the NFL in Cleveland extended beyond Browns fans.

Pittsburgh Steelers fans were offended by the move and a protest was held during the rivalry game in Pittsburgh. They felt as though Modell was robbing them of the greatest sports rivalry of all time.

With the relocation hearing being held in February, there was still a sliver of hope. Fans still attended games hoping their presence would convince Modell to stay in Cleveland.

Hope ran out and frustration boiled over at the final Browns’ home game of the season. This game was lit. By lit I mean, fans lit the stands on fire. They also tore a part the bathrooms and threw rows of empty seats on the field after tearing them out of the ground. Yes, this all happened during the game. Cleveland loves their sports teams with a fiery passion, literally. If you get in the way of this love, they will destroy you and anything in their path like a mama bear trying to find their cubs.

In the end, all of the Browns’ sponsors pulled out of their contracts, Municipal Stadium was demolished, and Cleveland no longer had a professional football team to call their own.

From the moment LeBron James stepped on the court at St. Vincent – St. Mary High School he became the darling of North East Ohio. His skill was reminiscent of Michael Jordan and Julius Erving. James’ grit, determination, and willingness to be a team player was to be revered. He was the guy you wanted on your team.

A light shined upon the city of Cleveland when they were granted the first pick of the 2003 NBA draft, the year James was draft eligible. The Cavaliers drafted James and the rise of the Cavaliers began. Things were going great for the Cavaliers and James. During the honeymoon period, James was named to the NBA All-Star Game six times, voted MVP two times, and helped lead the team to their first ever NBA Finals appearance.

Then, just like a season of Grey’s Anatomy, the Cavaliers storyline made Cleveland’s emotions go from “Omg, I’m so happy. This show is the best” to “Excuse me while I lock myself in my room and cry in the corner for five days”.

In 2010, LeBron James announced he was going to take his talents and a piece of Cleveland’s heart to South Beach on national television. That’s right, James dumped Cleveland in the most public way possible.

Things were lit the night of The Decision. By lit I mean, most of Northeast Ohio lit their LeBron James jerseys on fire.

Are you sensing a pattern here?

Luckily for James, Northeast Ohio is a forgiving place and when he came back home in 2014 the fans welcomed him with open arms.

I can’t decide which is worse the sports team you love with every fiber of your being makes it to the second round of the playoffs and at the start of the next season is moved to another city OR the darling of your city dumping you on National television.

Bearing this in mind, never in my life did I think I would be writing an article about how multiple sports teams in Cleveland were having mounds of success at the same time. I knew it would happen one day. Like, after I died, when hell froze over, or when pigs grew wings and learned how to fly.

Sometimes the city of Cleveland is blessed with joy and happiness.

Sometimes Cleveland gets to have a joyful sports watching experience.

Sometimes things don’t get set on fire and that’s great.

This season Cleveland has not one, not two but three sports success stories.

As the clock ticked closer to the final two minutes of the first round, Miocic was being chased around the outer rim of The Octagon by Werdum.

Werdum closed in on his prey.

While backing away Miocic, landed a right hand on the exposed chin of Werdum sending the opposition crashing to the ground.

In the heat of the moment, Miocic landed one, two, THREE SHOTS to Werdum on the ground before the referee stepped in to end the fight.

Miocic did it! He broke the Cleveland Championship drought and was named the UFC Heavyweight champion.

For the second straight season the Cleveland Cavaliers are headed to the NBA Finals.

The opponent is the same but will the outcome be different? It’s possible. Not only are the Cavs healthy this season, they are playing as a team and having an awful lot of fun.

Their team handshakes are on point and they’ve been able to sink threes like nobody’s business.

After losing their last game of the season to the Detroit Pistons, the Cavs knew they had to make a statement in the first round of the playoffs.

Boy did they make a statement.

The Cavs ended up meeting the Pistons in the first round of the playoffs. They were now fueled by revenge. Negative energy from the last regular season loss was channeled properly and the Cavs swept the first round.

Wait! What are you doing? Don’t put your broom away yet!

The Cavs would go on to sweep the Atlanta Hawks in round two. In three of four games, the Cavs kept the Hawks under 100 points.

Ok, you can put your broom away now. You should know by now nothing comes easy for Cleveland.

After 6 games against the Toronto Raptors, and having Drake yell at you from the sidelines like he was at the Cheesecake Factory, the Cavs earned entry into the NBA Finals.

The Cavs scored under 100 points in their two losses to the Raptors. Defensively the teams were evenly matched. Except in the final two games of the series when it was very clear the Cavaliers weren’t playing any games.

Even though the Springfield Falcons had a slow rise of success during their time as the Jackets affiliate, no one knew what to expect from the new Monsters. In fact, I don’t think anyone saw an appearance in the Calder Cup Finals happening. However, the hockey gods smiled upon the city of Cleveland and sent the Monsters to their first ever Calder Cup appearance.

The first round brought a sweep against the Rockford Ice Hogs.

The second round brought a little bit bigger of a challenge against their foe, the Grand Rapid Griffins. After going up 3-0 in the series, the Griffins pushed a game 5 and a game 6. Thanks to Werenski’s overtime game-winning goal in game 6 the Monsters would head to the Conference Finals to face the reigning champions, the Ontario Reign.

While the Monsters did not play their best hockey against the Reign they managed to sweep the Conference Finals. The pinnacle of the series came during the second overtime of game 4 when Lukas Sedlak scored the game-winning goal.

Josh Anderson had just taken a less than nice hit into the boards. Instead of staying on the ground, even though he was clearly in pain, Anderson went after the puck.

The crowd at Quicken Loans Arena booed the refs incessantly for the non-call.

While the fans booed Anderson grabbed the puck, skated through two players, and shot at the goal. Budaj, the Ontario Reign’s goalie, promptly pushed the puck away. When I say pushed away, I mean Budaj pushed the puck directly into Sedlak allowing him to slap the rebound into the goal. 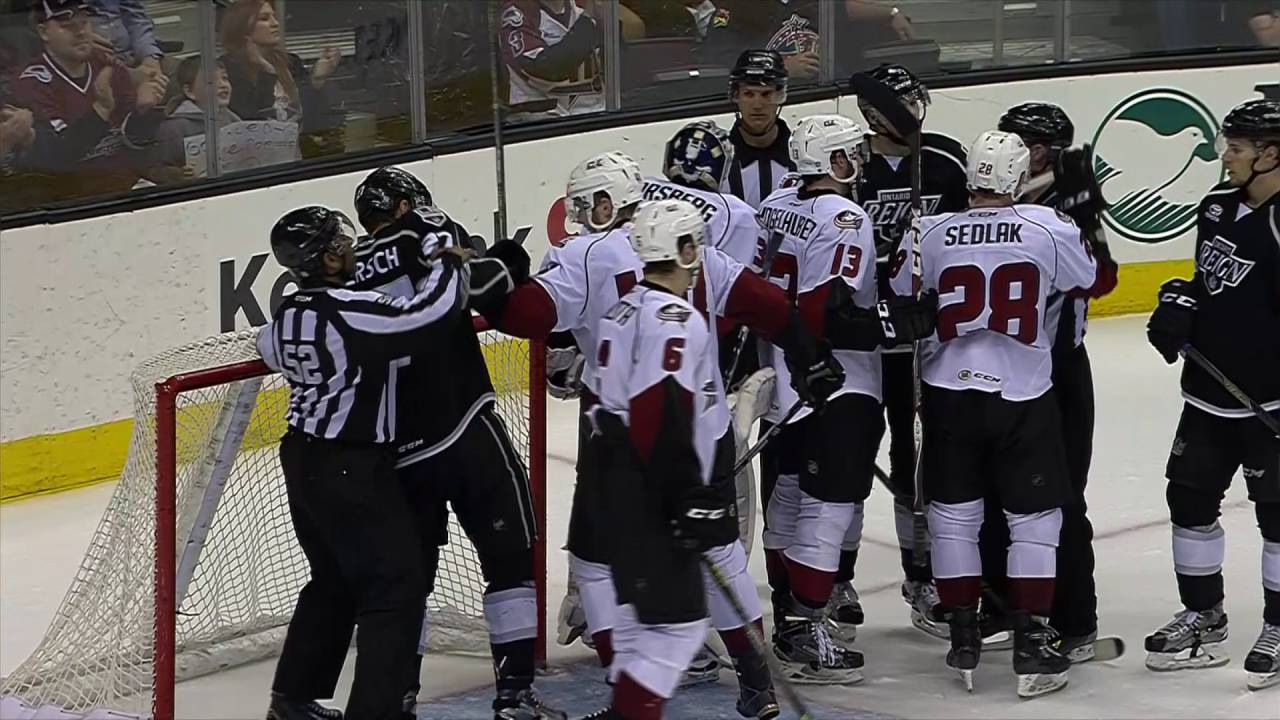 All of the pain and suffering Cleveland has experienced over the years almost feels worth it to have a summer like this one. A summer where the good outweighs the bad and hope thrives. A summer where dreams come true. Please don’t pinch me. I’m not ready to wake up.