The Detroit Red Wings sit with a 9-10-1 record through 20 games this season, placing them 14th in the Eastern Conference. Certainly, both the fanbase and the team were hoping for a better start to the year, even if most assumed the Wings would struggle this season.

Although they got off to a 6-2-0 start through their first eight games, they also gave up the third most shots against (265) in the entire league during that time, and were riding a shooting percentage of 11.2%. Their bad habits continued, and the team began the slide to their current record.

It has not been all doom and gloom, though. In addition to Howard’s stellar play of Jimmy Howard (1.76 goals against average, .943 save percentage), the trio of Andreas Athanasiou, Anthony Mantha and Ryan Sproul have given the fanbase hope for the future. Heading into the 2016-17 season, none of the young Red Wings factored into the team’s plans for the season. However, some strong play during the preseason and a number of injuries afforded them opportunities on the main roster. 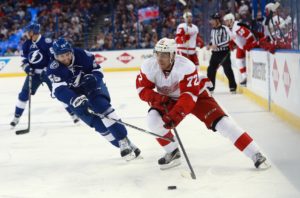 Athanasiou started the season in Detroit, despite his waiver-exempt status. With Tomas Jurco sidelined to start the season, the 22-year-old forward battled with the likes of Martin Frk and Teemu Pulkkinen for a spot as the 13th forward on the roster. He played well enough for the team to waive both of the aforementioned players.

Currently sidelined with a knee sprain, the speedy forward was playing well before the injury. Through 13 games, he registered four goals and one assist, despite skating an average of just 12:06 per game. His 1.52 G/60 places him 20th in the league for forwards who have played in 10-plus games this season.

The biggest takeaway for Athanasiou through the first 20 games of the season is that he is earning the trust of head coach Jeff Blashill, despite some early criticism from the Wings’ bench boss. His ice time steadily increased as the season progressed, and is a step up from the 9:01 TOI/GP he played last year. If Athanasiou can convince Blashill that he is defensively responsible, his role on the team will continue to expand.

When Athanasiou went down with his injury, the team elected to recall Mantha from the Grand Rapids Griffins. The 22-year-old winger spent the early parts of his season tearing up the American Hockey League, scoring eight goals through 10 games. His production was enough for the Wings’ brass to call him up to the main roster.

Though it is a small sample size, Mantha has played well through five games. Despite only notching a goal and an assist, he has buzzed around the net during his time in Detroit, and the goal he was able to score was a solid display of his ability to shoot the puck.

Perhaps even more encouraging is the way Blashill has deployed him through his stint in Detroit. In addition to skating with Henrik Zetterberg and Justin Abdelkader, Mantha has played an average of 16:13 per game, and received 02:51 of ice time on the team’s power play.

It will be interesting to see how the Red Wings handle the hulking winger in the near future. Jurco should return to the team this weekend, and while Tyler Bertuzzi is the most likely candidate to return to Grand Rapids, the Wings recalled him before Mantha. 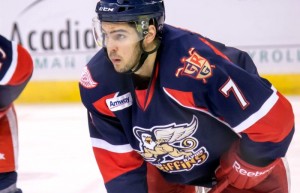 The Red Wings’ defense corps is a glaring weakness for the team, so it was not a total shock when general manager Ken Holland elected to carry Ryan Sproul as the eighth defensemen heading into the season. Starting the year as the low man on the depth chart, Sproul’s situation remained uncertain until management told him to find a home in the area.

Through nine games, the 23-year-old defenseman has registered one goal and four assists. Forced out of the lineup by a healthy Niklas Kronwall, Sproul returned with a vengeance, scoring three of those points in his last four games.

Among a group of defenders that have struggled mightily through the year, Sproul represents a breath of fresh air, and stands as perhaps the second-best offensive defender on the team behind Mike Green. Even if the Wings’ blue line is operating at full health, he should remain a regular in the lineup.