The Hockey News reported that as of November 28, Buffalo Sabres forward Zemgus Girgensons was fourth overall in voting (and most recently has been as high as second) for the 2015 all-star game to be held in Columbus, Ohio. For many, it may seem very perplexing that a forward with just 12 points playing for a last place team is so high in the voting ranks. However, when you take a closer look, a lot more clarity can be found.

One of the biggest advantages that Girgensons has is an extremely strong support group. His unrivalled work ethic and hard-nose playing style makes it impossible for fans not to get behind this guy. The tattoo on his bicep sums up his mentality perfectly.

“I do it because I can, I can because I want to, I want to because you said I couldn’t.”

It’s this type of drive that has gotten the second-year NHLer to the Show. On a nightly basis, Girgensons is the best and hardest working player on the ice for the Sabres, no matter the score or the team’s place in the standings.

Hailing from Latvia, Girgensons embraced playing the role of the underdog from the beginning. In spite of having a population of just 2 million people, the small eastern European country plays at hockey’s highest international level competing against the World’s top hockey nations, including taking the eventual gold-medal-winning Canadian squad to the brink during the 2014 Olympics. 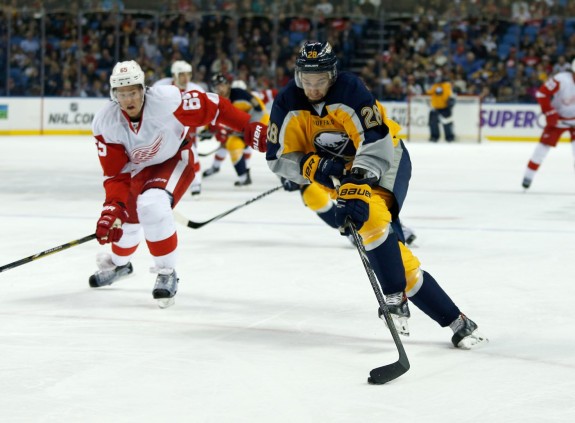 I actually recently had the opportunity to visit the capital of Riga a few weeks back, and speaking to the locals, you quickly realize the importance of hockey and the success of Girgensons. To quote my chauffeur from the airport, “hockey is religion here and Zemgus is our guy.” You best believe the Latvian faithful are getting behind ‘their guy’ and voting as much as they can.

On the other side of the world, there is also a very strong Girgensons following in Buffalo. It’s no surprise that the blue-collar city quickly adopted the 110% effort of the 20-year-old forward. Buffalonians are as equally loyal and supportive as the Latvians, as they too have come accustomed to being the underdog, enduring year after year of sports futility.

While it’s easy not to be blown away by Girgensons when looking at his stat sheet – 6 goals and 6 assists in 23 games – lets not forget he’s one of the lone bright spots on a very bad and talent-lacking team. The guys over at The Fourth Period, did a good job putting this into perspective. One of the best points made was in regards to his plus-minus rating.

Girgensons is a +6. That is an astonishing number considering the Sabres team goal differential is -35, as they are once again the worst offensive team in the NHL. The Sabres probably aren’t deserving of an all-star, but if there was one on the team, Girgensons would definitely have to get the nod. Considering what he has to work with, his numbers are actually quite impressive. Imagine what the Latvian forward could do with even an average supporting cast.

Nothing about Girgensons game is flashy, but one thing is for certain, no player will ever out work him. If you’d like to support Girgenson’s all-star bid or vote for any of your personal favorites, head over to the NHL  all-star game fan voting website.

3 thoughts on “Zemgus Girgensons the All-Star?”