Throughout the history of the NHL, players who have scored goals have always been at the forefront of the discussion. Often discussed is the NHL’s illustrious 500-goal club that only 45 players in history have joined. Another club that is exclusive and significantly harder to crack is the NHL’s 600-goal club that has seen only 19 players join in history. It’s never been easy to score goals in the NHL. When looking at some of the best players in history, it’s evident that scoring a goal is harder than recording an assist – something that doesn’t involve burying the puck, and something that can be awarded to two players on the same goal. Still, if goals are harder than assists to record, the fact that only 13 players in history have ever reached the 1,000-assist mark is worth acknowledging.

The 1,000-assist club only consists of 13 players – who will all be looked at within this article – and has proven to consist of some of the most elite names in the history of the game. This list will look at the members of the 1,000-assist club from the players with the fewest assists to the most and will include the team whom with the player reached the milestone.

Joe Thornton joined the 1,000-assist club during the 2016-17 league year in his 19th NHL season. He became just the 13th player in history to reach the 1,000-assist mark in the NHL and has proven over the years that he is one of the elite playmakers to ever play the game. Though originally drafted with the first overall selection in the 1997 NHL Entry Draft by the Boston Bruins, “Jumbo” Joe Thornton has made a name for himself in San Jose with the Sharks since the 2005-06 season which he split between the Bruins and the Sharks. His career-high in assists came during that season when he posted an astounding 96 helpers in 81 games. 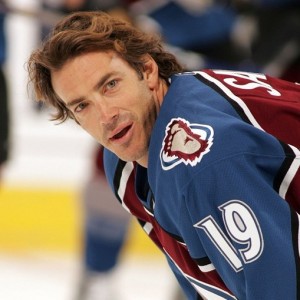 Very few players in NHL history have recorded 1,000 assists. Even fewer players have scored over 600 goals and 1,000 assists, but that is the special class of player that Joe Sakic falls into. One of the best players in the history of the sport, Sakic spent his entire career with the Quebec Nordiques / Colorado Avalanche franchise, recording 625 goals and 1,016 assists in 1,378 games. Sakic recorded a career-high in assists during the 1995-96 season when he recorded 69 assists and 120 points in 82 games. On top of Sakic’s impressive regular season resume, he also managed to score 104 assists in just 172 playoff games throughout his 20 NHL seasons.

Despite dealing with injuries throughout the course of his career, Mario Lemieux demonstrated a level of talent and hard work that set him in a class of his own. Known as “The Magnificent One,” Lemieux proved for years that he was one of the greatest players in the league at the time. In the end, he not only proved that he was an elite player at the time, but he’s widely considered to be one of the best players to have ever lived.

Averaging a point-per-game is an impressive pace that few players can manage in today’s NHL. For Lemieux, this task was more than feasible as he averaged 1.88 points-per-game in his career which included a three-year hiatus from 1997-98 until 1999-00. Even more impressive is the fact that Lemieux finished his career averaging over one assist per game with 1033 in 915 career contests to go along with his 1,723 points. Lemieux’s career-high in assists came during the 1988-89 season when he recorded 114 assists and 199 points in just 76 games. His 690 goals also make him another member of the 600-goal and 1,000-assist club.

One of the more notable examples that size isn’t everything in the NHL, Marcel Dionne proved to be one of the great hockey players in history despite standing at just 5 foot 8 and weighing 185 pounds. Dionne holds fifth place in the all-time point scoring standings in the NHL, sitting behind just Gretzky, Jaromir Jark Mark Messier and Gordie Howe – all of whom have their own membership card to the 1,000-assist club. While scoring 600 goals and 1,000 assists in a career is an impressive feat, Dionne went one step further and scored 731 goals and 1,040 assists for 1,771 points in 1,348 games. One of the best goal scorers in history, Dionne was also able to tally impressive assist totals each season with his career-high coming in 1979-80 when he notched 84 assists and 137 points in 80 games.

There have been many talented players throughout the history of the NHL. Some have earned nicknames such as “The Rocket” or “The Great One” or in the case of Lemieux, “The Magnificent One.” Going down in history with the nickname “Mr. Hockey,” however, is a clear indicator that Gordie Howe was a special talent. Playing in the NHL for 26 seasons, Howe was able to produce some of the most impressive statistics in history.

Due to his durability, Howe played in 1,767 NHL games – on top of 419 WHL games, and scored 801 goals and 1,850 points, and his 1049 assists rank him ninth all-time. While most members of the 1,000-assist club of a few seasons that stand out above the rest in terms of assist total, it’s the consistency that Howe displayed throughout his career that earned him a spot in this club. Howe recorded over 50 assists just once in his career (coming in 1968-69 when he notched career-highs in assists with 59 and point with 103. He did, however, record at least 40 assists in 15 consecutive seasons and 18 of his 26 NHL seasons. Howe is one of just two players in the history of the NHL to have recorded at least 800 goals and 1,000 assists.

Spending his entire career with the Detroit Red Wings across 22 NHL seasons, Steve Yzerman has made his mark in the league as a superstar player and a very talented general manager. In 1,514 games, Yzerman tallied 1,063 assists and 1,755 points. He is also another member of the exclusive 600-goals, 1000-assists club. Yzerman displayed consistency throughout his career, recording at least 40 assists in 15 of 17 seasons from 1983-84 until 1999-00. His career high in assists came during the 1988-89 season, however, when he recorded career-highs in goals (65) assists (90) and points (155).

Though his time as a player will always define his legacy, Adam Oates is one of many former players to have also made his mark in the league additionally as a coach. With his impressive vision and smart decision making, Oates is considered one of the better playmakers in history. His passing was on a level of its own which helped him join the 1000-assists club with his 1,079 assists and 1,420 points in 1,337 games. Known most for his time with the Boston Bruins and the Washington Capitals, Oates spent the first six seasons of his career with the Detroit Red Wings and St. Louis Blues. His best assist total came during the 1992-93 season when he set career-highs in games played (84) goals (45) assists (97) and points (142).

Only two defensemen in history have found themselves as members of the 1,000-assist club. One of the most impressive individual milestones in the NHL, Paul Coffey was able to record 1,135 assists through just 1,409 games. In his career, Coffey scored 396 goals and 1,531 points in 1,409 games – an impressive average per-game, given the fact that he was a defenseman throughout his career. Coffey additionally was able to play with both Wayne Gretzky and Lemieux, something that not many players can claim. His career-high in assists came during the 1985-86 season when he recorded 90 assists and 138 points in 79 games.

A modern day Howe, Jaromir Jagr has broken the barrier that many athletes have faced and failed to overcome – father time. At 45 years old, Jagr still looks like a tremendously talented player, which is fitting given the fact that he ranks second in the NHL in all-time points with 1,909 points. Having played in 1,701 games, Jagr has scored 763 goals and 1,146 assists, making him one of the four players to have reached the 700-goal, 1,000-assist marks in history. Jagr’s career-high in assists came during the 1995-96 season when he recorded 87 assists and 149 points in just 82 games. 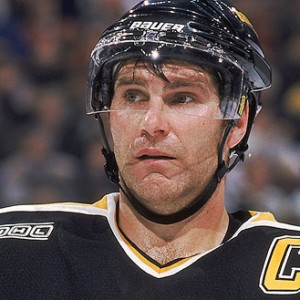 Just the second defenseman in history to tally 1,000 assists, Ray Bourque has gone down as one of the best blueliners in the history of the game. Despite playing defense, Bourque was one of the most offensively-gifted players in the NHL during his playing days, scoring 410 goals and 1,579 points in 1,612 games split between the Boston Bruins and Colorado Avalanche. Though Bourque’s best seasons came as a member of the Boston Bruins, it was his brief stint with the Avalanche that many remember given his Stanley Cup victory in 2001. Bourque’s career-high in assists came during the 1990-91 season with the Bruins when he tallied 73 assists in just 76 games. Bourque reached the 70-assist mark three times in his career and tallied 60 or more in 10 seasons.

Mark Messier has always been a household name in hockey. A member of the Oilers’ dynasty in Edmonton during the 1980s, it’s no surprise to see Messier as a member of the 1000-assist club, especially given the fact that he ranked second in points on the all-time NHL scoring list until the 2016-17 season when he was uprooted by Jagr. Messier recorded his single-season career high in assists in 1989-90 when he tallied 84 assists and 129 points in 79 games. Messier went on to cement his legacy as a player away from the Oilers’ dynasty when he played with the New York Rangers and ultimately brought the Rangers a Stanley Cup in 1994. 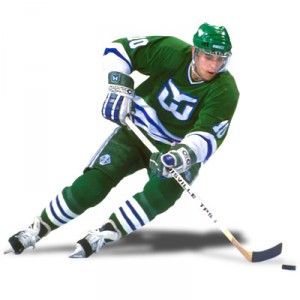 Ron Francis has made a name for himself as an executive in the NHL in recent years in his role as the general manager of the Carolina Hurricanes. Once drafted by the Hartford Whalers with the fourth-overall draft pick and spending 16 seasons with the Whalers / Hurricanes organization, it was actually with the Penguins that Francis qualified for the 1000-assist club. Francis recorded his career-high in assists in 1995-96 when he tallied 92 assists and 119 points in 77 games which was far-and-away the best mark of his career. Still, Francis proved to be another example of consistency having reached the 40-assist mark in 18 seasons.

Few words can describe Gretzky. Deemed “The Great One,” it’s less of a nickname for No. 99 and more of a title. It is widely agreed upon that Gretzky is the greatest player to ever lace up a pair of skates – though the topic has been debated for years with talents such as Bobby Orr, Lemieux and Howe also receiving consideration for the top spot in history.

Little can be said about Gretzky that hasn’t already been said.