The ‘core’ that the Boston Bruins spoke so much about has lost some parts and it’s the hope of the team that the new pieces will serve as an upgrade. But the one key element that Boston has going into the season is uncertainty. Nobody really knows how good this team can be. Sure, on paper they may look solid but until the Bruins hit the ice to start the 2013-14 NHL season, it’s anyone’s guess.

So to prepare for the 2013-14 NHL season, here’s a five-part series laying out some predictions about what this year could look like for the Bruins. Some are logical, some are a stretch and some are…well…you’ll see.

Part 1: Everyone Will Love Jarome Iginla
Part 2: Unlike Phil Kessel, Tyler Seguin Will Be Forgotten 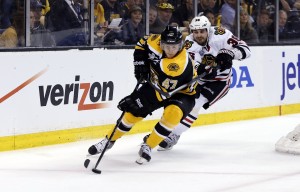 #3: New-Look Bruins Defense Will Be a Non-Issue

During the 2013 NHL season, the Boston Bruins had the third lowest goals-against per game. They had the fourth best penalty kill in the NHL too, even though they had were the sixth highest team in minutes spent shorthanded.

Want to know what else? With the exception of Torey Krug, who played just one game in the regular season, no Bruins defenseman finished with a negative plus-minus. No other NHL team can say that–not even the Chicago Blackhawks.

So now that Andrew Ference is an Edmonton Oiler, there may be some concern that the Bruins’ defense lost a step now that Matt Bartkowski, Torey Krug, and Dougie Hamilton are in as permanent fixtures. Each of those players are, for the most part, untested in the regular season and could be a wildcard with a regular 82-game season on deck. Don’t be fooled by their inexperience, because these three could make the defense more dynamic than ever before.

Here’s what we already have learned: Krug can be an offensive weapon on the blue line, Bartkowski knows how to read a play and is solid in all three zones, and Hamilton, when consistent, has the potential to be a game changer.

Expect more of the same from Zdeno Chara, Dennis Seidenberg, and Johnny Boychuk–the variables in the Bruins defense this season are the other players who will occupy roster spots. Take Bartkowski for example. If he can carry over his solid play from the postseason, he’ll be ideal for the Bruins’ back-end. Bartkowski became one of the toughest guys clearing out opponents from the slot during the postseason. Even after being thrown into the mix because of injuries, Bartkowski showed poise and stepped up when the Bruins defense needed him most in the playoffs. If he can do that under pressure, he can do it in the regular season. Factor in potentially playing alongside Dennis Seidenberg, his defensive partner in the postseason, and Bartkowski could have quite the season with a mentor known for being a shut-down defender.

But a replacement for Ference, that’s not him. That’s Adam McQuaid.

Dougie Hamilton will look to build upon his strong first year with the Bruins as he prepares for the ’13-’14 NHL season. (Bob DeChiara-USA TODAY Sports)

Aside from being in the spotlight after his game-winning goal in Game 4 of the Eastern Conference Final, McQuaid’s impressive postseason almost went unnoticed. For a guy that has a penchant for injuries, his 22-game campaign in the postseason made him seem more like an iron-man than a bottom-pairing defenseman. McQuaid is coming to training camp healthy and will find himself grouped into the same pack as leaders Chara, Seidenberg, and Boychuk. No longer is he a number six defenseman, haunted by injuries, he’s the guy that the Bruins are expecting to step up and carry over momentum from his postseason play.

The points may not be there, but as long his stay-at-home nature remains strong, McQuaid could be a valued member of the Bruins defense like he never has been before. It’ll help if Krug is playing next to him, too.

Yes, Torey Krug, the rookie sensation that took the Bruins by storm this past postseason, scoring four goals in five games in the Eastern Conference Semifinals against the New York Rangers and not doing much else after that. Reason for concern that Krug is a flash in the pan? Absolutely. Reason enough to believe that Krug has the ability to do it again and be the elusive puck-moving defenseman that the Bruins have craved for years? Absolutely.

The last remaining spot on the Bruins blue-line will come down to Krug and Hamilton, if only because of their pure offensive talent but glaring flaws when handling the puck in their own zone. Surely you remember Krug lighting up Henrik Lundqvist, but how about his defensive miscues that cost the Bruins a few goals in the Stanley Cup Final against the Blackhawks? Hamilton is similar. When productive, Hamilton has the ability to quarterback break-outs and stretch out the ice when moving the puck to his forwards. Inconsistency, however, is Hamilton’s biggest issue, often looking lost on the ice as the youngest member of the Bruins defense.

Krug and Hamilton could be special, though. Imagine a second power-play unit with these two puck-moving defensemen manning the blue line, filtering shots on net and getting the puck deep. The Bruins are close with both of these players if they can stay consistent. And if productive, the Bruins defense can accumulate points not seen since the 2008-09 roster.

So while there is still room to grow for Krug  and Hamilton, the ceiling is awfully high. Hone their skills in their own end and the Bruins could be looking at defensive depth with few weak links. Of course, everything is a big if.