With the 2015 NHL Entry Draft getting closer and closer, there are a few things we know.

There are also very few draft rankings that have anyone other than Boston College defenseman Noah Hanifin as the third overall pick.

The question then becomes, who’s next?

In a draft billed as one with generational talents McDavid and Eichel at the top, it is also a very deep draft, with numerous potential impact players throughout the first round.

Here’s a look at the frontrunners to round out the top 5 in the draft.

The big, strong power forward every team is searching for, Crouse is that prototype in every way. In addition to size and a willingness to play a physical game, Crouse is an excellent skater with good hands and the ability to finish in tight.

Playing as a 17 year old for Canada at the World Juniors upped his draft stock as he was able to impress scouts even in a fourth line role.

Playing primarily in the shadow of McDavid in Erie, Strome has had a terrific season in his own right and has been among the OHL scoring leaders all year.

The brother of the New York Islanders Ryan Strome, at 6’3″ he has more size than his older brother, but shares the elite hands, vision and playmaking ability.

“He has that competitive edge and grittiness; he wants to succeed, wants the puck, wants to score and wants to win,” Marr said. “He’s a driven player. That’s what made his brother such a successful player. He didn’t have the size but definitely had the desire.” – Dan Marr, NHL CS Scouting

The diminutive Marner, at 5’10” has been ripping up the OHL and leading the league in scoring with well over 2 points per game for the Knights.

He has sublime skill, with elite hands and has excelled as a playmaker and a finisher. He is one of the most dynamic offensive talents in the draft with the only question mark being his size. 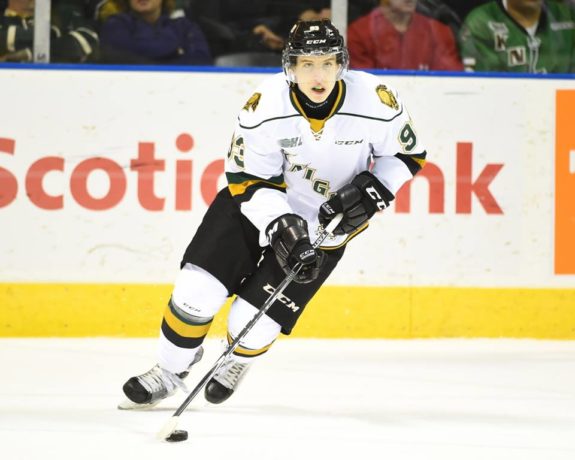 Mitch Marner is a magician with the puck and smart without it. (Photo: OHL Images)

The college freshman is a smooth skating offensive defenseman that can skate the puck out of his zone with ease and put up points from the backend.

He also possesses good size and on-ice awareness and is projected as a future top pairing defenseman. For a team looking for defense, Werenski is a good consolation prize to Hanifin.

*Power forward with blend of size, speed and skill

*Injured most of the year, offensive centre with great hands, vision and playmaking ability