We’re past the midway point of the draft year now and some prospects are clearly on the rise, while others have seen their stock steadily fall.

A select few are trending more rapidly, be it up or down, as evidenced in the sixth edition of my 2019 NHL Draft rankings.

So much has changed in six short months when looking back on my preseason rankings, published in late August following the Hlinka Gretzky Cup, but there continues to be plenty of movement from one month to the next.

ANALYSIS: This may be perceived as a momentum play based on Robertson’s standout performance at the recent CHL Top Prospects Game but, reality is, this kid has been a standout every time I’ve watched him this season. He was every bit as dominant and dynamic in that prospects game as I remembered him being at the Hlinka in the summer. A special talent from what I’ve seen and worthy of being ranked in the teens. 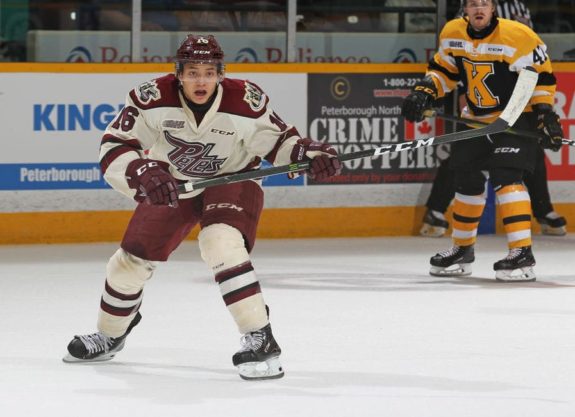 (Claus Andersen/Getty Images)
Nick Robertson has been playing like a first-round pick for the Peterborough Petes since returning from an early-season injury.

I know Jack Hughes is getting the Patrick Kane comparison and rightfully so, but I see shades of Kane in Robertson’s skill-set as well. He’s on the small side, but he’s got big game. Some may not see that elite level in Robertson, but I’ve been higher on him than most from the outset — debuting Robertson at No. 26 in my preseason rankings. So, from that perspective, he’s up 12 spots over six months for me.

ANALYSIS: With Knight, I needed a reminder that my rankings are based on talent and potential upside, not a projection of where these prospects might go in the draft. That is the big difference between my rankings and my mock to come in June, and sometimes it’s difficult to separate the two trains of thought. My January ranking and Knight’s subsequent appearance on my monthly fallers list was very much a mock mentality, citing the fact that teams tend to avoid taking goaltenders in the first round and thus dropping Knight from my top 31. 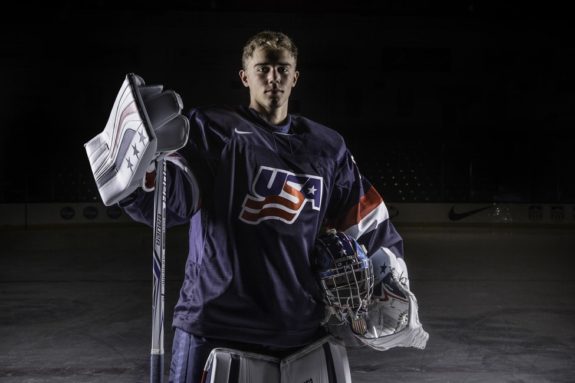 (Rena Laverty/USA Hockey’s NTDP)
Spencer Knight is almost surely going to be the first goalie selected in this year’s NHL draft, it’s just a matter of how high.

That’s true, but Knight has proven himself to be a first-round talent from a rankings standpoint. And, truth be told, he’s been appearing in the first round of most the mocks I’ve seen to date too. Knight was a consensus first-round pick for NHL.com in their three-person mock conducted over the All-Star break and published on Jan. 27, with Mike Morreale taking Knight in the top 10 at seventh overall to Florida, while Adam Kimelman had him 14th to Colorado and Guillaume Lepage had him 24th to Vegas. So, yeah, it’s looking like Knight will be a first-rounder as one of the best goaltending prospects in recent years.

ANALYSIS: Tomasino has been tearing up the OHL lately and I finally got to see what all the hype was about in the CHL Top Prospects Game. He didn’t factor into the scoring in that showcase, but Tomasino was making things happen every time he touched the puck and he certainly had his share of possession time. Like Robertson, Tomasino was a real catalyst for his line even though he didn’t get the same results.

Watching Tomasino on that stage, I started to think of Morgan Frost as a comparable. The skill-sets seem similar and Frost was a second-half riser in becoming a first-rounder (27th overall) for 2017. I could see the same for Tomasino, so better late than never in getting on his bandwagon.

ANALYSIS: I’ve been up and down on Vlasic, bouncing him around my second round through six rankings — 60, 32, 34, 53, 45, now 35. He landed on my fallers list for December, yet my analysis then is much the same as today when I’m touting Vlasic as a riser. Strange, I know, but here is a copy-and-paste from December: “Vlasic certainly has the size to be a first-round pick and he skates fairly well for a big guy, but does he have the offensive upside to crack the top 31? That will be the biggest question for scouts as the draft year continues into 2019. If Vlasic projects as more of a shutdown type in the NHL, then he might get labelled a safer pick that slides into the second round.”

As you can tell, I wasn’t exactly hating on the kid despite dropping him to 53rd for that month. I went on to say “the best comparable might be Boston’s Brandon Carlo (37th in 2015), but some see Vegas prospect Nic Hague (34th in 2017) or shades of Winnipeg first-rounder Logan Stanley (18th in 2016). Depending on the month, I’ve been higher or lower on Vlasic, but I’m still trying to determine his upside as an NHLer.”

Yes, that remains the case in February, but I can add that some scouts are throwing out another comparable — his older cousin, Marc-Edouard Vlasic (35th in 2005). And, yes, it’s a total coincidence that I have Alex Vlasic ranked 35th in the present, but if that comparison gains traction between now and June, Vlasic will likely wind up as a first-rounder and possibly even a top-20 pick.

ANALYSIS: Bjornfot had been trending down for me (23, 30, 35, 42, 54), but I had to put a stop to that (now 36). He’s not overly flashy either and thus can get lost in the shuffle a bit, but Bjornfot is a very effective defender and an underrated passer with a fair bit of offensive upside. He has a lot of tools to become a top-four blueliner in the NHL.

#U18: Defense and goaltending taking the day off in Sochi, as LHD Tobias Bjornfot (Ranked No. 33) goes coast to coast to tie the game 5-5 in the 3rd. pic.twitter.com/CoU26Finhf

Jonas Brodin is the comparison often associated with Bjornfot and it is a good one stylistically, even though Brodin went 10th overall in 2011. Bjornfot could emerge as a first-rounder in June, I’m sure several teams have him ranked in their top 31 as of today, and he’s in that 27-45 tier for my February rankings. That’s where Bjornfot belongs, in my opinion, and a handful of those prospects would be selected in the first round if the draft were held tomorrow — or if my mock was published tomorrow, I should say.

ANALYSIS: These next three are in that tier too, in the mix for the first round. Afanasyev is obviously having a breakout season in the USHL, for the same program that developed Andrei Svechnikov the season before his draft year. Afanasyev could be perceived as a poor man’s Svechnikov just based on their size and all-around game as power-forward types, but that’s probably not the best comparison. 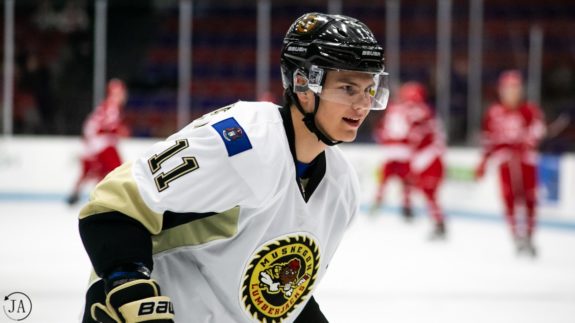 (Jenae Anderson / The Hockey Writers)
Egor Afanasyev is putting up the kind of numbers to warrant first-round consideration as a member of the Muskegon Lumberjacks.

I’m still getting to know Afanasyev, but he’s an intriguing talent with a skill-set that could translate well to pro. I do know he’s fully embracing all that comes with the draft year and he’s got an engaging personality. He’s following me on Twitter — the only 2019 prospect among my followers, at least to my knowledge — but that won’t get Afanasyev any preferential treatment in my rankings. Not to worry, his work on the ice is worthy of this ranking and of making this month’s list of risers. 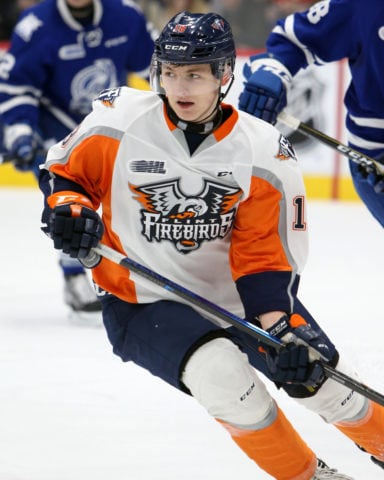 (Luke Durda/OHL Images)
Vladislav Kolyachonok of the Flint Firebirds has taken an interesting path to this point and he’s managed to excel every step of the way.

ANALYSIS: Central Scouting is really high on Kolyachonok, listing him as an A-level prospect and projected first-rounder going back as far as November, but I wasn’t so sure until I watched him in the CHL Top Prospects Game. Kolyachonok won me over in that showcase, convincing me that he possesses the tools — in terms of skating, positioning and puck skills — to potentially crack the top 31 come June. I probably wouldn’t take Kolyachonok that high in my mock as of today, but now I can see why Central Scouting has been touting him for the past few months.

Kolyachonok has overcome quite a bit of adversity during his draft year, considering he started out with London, one of the OHL’s best teams, before landing with Flint, one of the OHL’s worst teams. Had he stuck in London, Kolyachonok might have been a consensus first-rounder by now in playing for a powerhouse program that is heavily scouted every season, but he also may have had a limited role on that stacked roster. Instead, Kolyachonok is making the most of his move to a less desirable destination in logging big minutes for Flint and staying afloat in the midst of a pretty productive campaign. He’s still flying a little under the radar being on such a bad team, but Kolyachonok is a good prospect on the rise.

ANALYSIS: By all accounts, Johnson really raised his stock between the World Junior A Challenge in December and the USHL Top Prospects Game in January. Despite not recording a point in either of those showcases, Johnson’s skating, puck-moving ability and defensive awareness stood out amongst his peers. And he does have offensive upside, leading his USHL team in scoring amongst defencemen.

Johnson is well rounded and perhaps more polished than Kolyachonok in the present, but they are equally promising for the future. Johnson has been trending up all season and lately he’s been showing up in the first-round range more and more frequently. He’s working his way up my rankings too, knocking on the door of the top 31 going forward.

ANALYSIS: Puistola is having a stellar season statistically, putting up points and producing highlight-reel plays. He’s got next-level creativity, making him a fun prospect to watch — somewhat similar in that sense to Sweden’s Nils Hoglander (No. 37), or reminiscent of another Swede from the 2018 draft in Jonatan Berggren (33rd overall). I’m not sure if those are great comparisons in the big picture, but Puistola is certainly trending towards that tier of potential first-rounders. He’s one of the Finns to keep a close eye on in the second half.

All-time totals/season for U18 players in #Mestis. Patrik Puistola is having an incredible season. #2019NHLDraft pic.twitter.com/718l0Ssxlj

ANALYSIS: As we all know by now, this NTDP roster is stacked at every position. The defencemen get overshadowed by the forwards, but there is lots to like on the back end too. Warren joins Vlasic on this list, but Cam York (No. 12), Henry Thrun (No. 52) and Drew Helleson (No. 68) are all legitimate prospects who could be selected within the first two rounds in June. Dominick Fensore (No. 144) and Case McCarthy (No. 145) are no slouches either and could easily go in the top 100. Even Cade Webber (No. 160) is worth consideration by NHL teams. It wouldn’t be surprising, to me, to see all eight get drafted.

Warren, in particular, is a puck-mover with good mobility — fitting the mould of the modern-day defencemen that have become a hot commodity. Some rankings have elevated Warren into their first-round range, but I’m not there yet. He’s still fourth for me among the NTDP blueliners, behind York, Vlasic and Thrun. Warren is right there with Thrun and Helleson as part of a big tier from 46 to around 90 in my rankings, but Warren is the riser for me among those three.

NOTE: Here are 20 more significant risers from within my top 125 for February.