After a one-year hiatus, the Los Angeles Kings are in an ideal position with respect to making this year’s playoffs, sitting atop the Pacific division with a 31-17-3 (65 points). The San Jose Sharks are seven points back, with the surging Anaheim Ducks eight points behind with one game in hand.

And yet, the Kings are no juggernaut, particularly in recent weeks. Since January 4th and despite having played eight of thirteen games at home, the Kings are just 6-6-1, having scored just 33 goals while surrendering 35.

Both the offense and defense have struggled

Offensively, a number of big guns have gone silent. Tyler Toffoli has just one goal and two assists in his past eight games. Center Jeff Carter scored one goal in December, two in January and zero so far this month. Milan Lucic has lit the lamp just once in 2016, and Marian Gaborik remains mired in a season-long slump.

That’s four top-six forwards misfiring, which a defense-oriented team like Los Angeles can overcome as long as the blue line is playing at the top of its game. Judging by allowing nearly 2.7 goals per game over the past thirteen contests, that’s not been the case.

Further complicating matters is that pesky $71.4 million salary cap, in which the Kings are right up against the limit.

The odds of big trade are growing 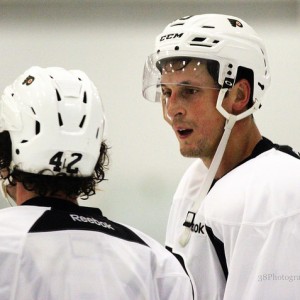 Vinny Lecavalier has been a net plus for Los Angeles. Photo: Amy Irvin.

Following the early January acquisition of Vincent Lecavalier and Luke Schenn from the Philadelphia Flyers, it appeared Los Angeles might remain on the sidelines at the trade deadline. Although they still may stand pat, there is a growing chance general manager Dean Lombardi — mindful that his team’s Stanley Cup window is wide open — might push the envelope again, just as he did by picking up Jeff Carter at the 2012 trade deadline and trading for Marian Gaborik two years later.

Despite the fact that the Kings have no cap flexibility, the trade deadline is an ideal time for Lombardi to pick up assets needed for the stretch drive and beyond. Only time will tell if he does it again this year, but if so, the following are three needs worth addressing.

Los Angeles has a terrific trio of defensemen in Drew Doughty, Jake Muzzin and Alec Martinez. Brayden McNabb is an improving stay-at-home defenseman with a physical edge, and Luke Schenn and Christian Ehrhoff round out a formidable defensive corps.

With that said, the Kings could use a proven top-four defenseman, which would push McNabb to the third pairing. There are few defensemen likely to be on the open market more enticing than impending free agent Dustin Byfuglien.

The Kings are reportedly interested in the 6’5″, 260 pound Byfuglien, who has been with Atlanta/Winnipeg for 5 1/2 seasons and carries a cap hit of $5.2 million. The large cap hit and the lack of a first round pick in this year’s draft (courtesy of the Andrej Sekera trade with Carolina) are obvious impediments to a deal, but that shouldn’t stop Lombardi from trying to work his deadline magic.

With so many forwards misfiring, it’s only natural that the Kings look at what might be available at the trade deadline. Although less likely than addressing the defense, there are still offensive possibilities worth considering.

The obstacles on the offensive side of the ice are daunting. Anze Kopitar and Tyler Toffoli are untouchable, trading Jeff Carter and/or Milan Lucic would be counterproductive, and both Marian Gaborik and Dustin Brown carry huge salaries.

However, there is one young forward who has yet to put it all together in parts of three seasons with the Kings who could spark significant interest on the open market: Tanner Pearson. Still just 23 years old, Pearson has shown promise, such as when he scored five goals and eleven assists in a 27-game stretch during November and December. However, with just two points in his last fourteen games and given his reduced minutes, Lombardi may be willing to roll the dice for a proven commodity.

Jiri Hudler is one of the names that will reportedly be made available for trade at the deadline, with Los Angeles having been linked as a possible suitor. Able to play both left wing and center, Hudler put up 31 goals and 76 points just last season and is a former Cup winner with the Red Wings. As a bonus, Hudler is strong at puck possession.

At $4 million, the Kings would have to send more than one player the other direction or the Flames would need to retain salary to make the math work. 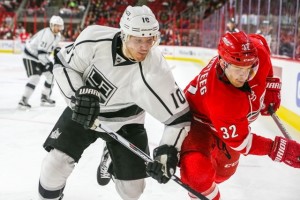 Christian Ehrhoff is a prime candidate to be moved in a deadline deal. Photo By: Andy Martin Jr.

The Kings won’t be sellers at the deadline, but Lombardi may spin a few pending free agents for future assets, particularly since the cupboard has gotten a little bare in recent seasons.

Unless re-signed over the next few months, Trevor Lewis will become an unrestricted free agent, as will Lucic, Christian Ehrhoff, Luke Schenn, Jamie McBain and Jhonas Enroth.

If Lombardi makes a deal or two to bolster the roster, one or more of the above free agents not named Lucic is certain to be involved. Even if not, moving Enroth while his value is high could be in the offing, especially with Peter Budaj available in Ontario. A number of the others could fetch future returns as well.

So what do you think? Will the Kings make one or more deadline deals, or will they stand pat? Leave your thoughts below, or message me @McLaughlinWalt.