The Pittsburgh Penguins need to retool their lineup if they want to compete for the Stanley Cup once again.

The roster is littered with overpaid and aging players. While the departure of Christian Ehrhoff, Paul Martin and Thomas Greiss will go a long way to alleviate the Penguins salary cap woes, there will be more happening in Pittsburgh this summer.

It’s been reported the Penguins are looking to sign Ian Cole to a long-term deal, which is great news for the future of the blue line.

Additionally, there are three players that the Penguins are looking to trade this offseason.

This should not come as a surprise to anyone. Rob Scuderi has played his last game in a Penguins uniform, one way or another.

Scuderi is a bottom-pairing defenseman, at best, in the current stage of his career and this would not be a problem, but he makes $3.375 million dollars.

He was never a fast player and his speed has rapidly vanished as he has aged. Scuderi misses assignments, is not effective in moving the puck and generally does not contribute much of anything to the Penguins.

Insider Josh Yohe, of DKonPittsburghSports.com, reported in his “Friday Insider” that the Pens will be looking to move Scuderi this offseason.

Here is Yohe’s take on Scuderi:

The Penguins want to become younger and more skilled. They don’t see a place for Scuderi and will consider trading him or buying him out, and the latter applies despite the news about ownership, as Mario Lemieux and Ron Burkle have given Rutherford that leeway.

The Penguins acquired Brandon Sutter in the trade that sent Jordan Staal to the Carolina Hurricanes. He was supposed to be a valid replacement, or at least attempt, to replace Staal on Pittsburgh’s third line.

To say his tenure in Pittsburgh has been underwhelming, is an understatement.

Sutter makes $3.3 million and plays like a fourth-line center. He’s weak on the boards, not a defensive force and degrades the wings who play around him.

I’ve already pointed out that if the Penguins want to improve their top-six, the trade package has to start with the vastly overrated Sutter.

He is not worth his current contract and, given that he just had his best season as a Penguin, his trade value will never be higher. Other teams see Sutter as a solid third-line center or a potential second-line center, who is just buried behind Sidney Crosby and Evgeni Malkin.

Here is Yohe’s take on Sutter:

Sutter is a player Rutherford likes. He’s also someone Rutherford thinks can help fetch top-six winger help for Sidney Crosby and Evgeni Malkin. Don’t be shocked if he goes.

Kunitz is probably the player least likely to be traded this offseason. Why is that when he is now 35-years old and makes $3.85 million?

Simply put, I do not believe that Kunitz was healthy during the second half of the season. Before he injured his foot, Kunitz scored 8 goals in his first 11 games and just 10 in his final 68.

People have cited Kunitz’s mysterious “iron deficiency” as why his production dropped, but this simply is not true. Kunitz did not get slammed by old age like some think; he was in a situation similar to Blake Comeau.

He could play the season, but his foot would not heal until the offseason, just like Comeau’s wrist, and hockey players are going to do everything they can to remain on the ice.

There’s always a chance that Kunitz will be traded this offseason, but of the three mentioned players, his departure is the most unlikely. The most realistic situation that Kunitz leaves the team is in a package deal to return a top-six forward to the Penguins.

Here is Yohe’s take on Kunitz:

Kunitz is still viewed favorably by management and the coaching staff but clearly lost a step last season. For salary cap reasons, if the Penguins can move him, they’ll consider it.

It’s certainly going to be an interesting offseason for the Penguins.

There are rumors the Penguins will attempt to sign a player like Vladimir Tarasenko or Brandon Saad to an offer sheet. 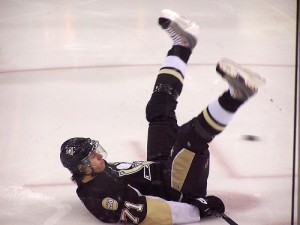 There is rumors that everyone from Kris Letang to Evgeni Malkin could be traded. Then, there is always the perplexing situation surrounding Beau Bennett and whether or not some young forwards will make the roster.

In addition to all of this, the Penguins might be sold and there are a lot of changes that could go along with that.

For Penguins fans, this offseason looks to be as exciting as they come. However, one thing is certain: Scuderi will never put on a Penguins jersey again and that in itself is something to be celebrated.