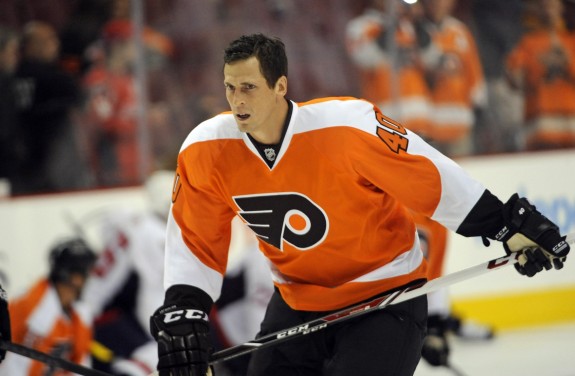 The 2013-14 season marks the 40 year anniversary of the Philadelphia Flyers’ first Stanley Cup victory.  You read that right.  That’s for-ty, not four (like many Flyers fans hoped). *damn you Chicago!*

As with every start to the NHL season, there is excitement surrounding the team.  The fans are hoping Vincent Lecavalier will be the Vinny of old – circa 2004 – and that Ray Emery and Steve Mason will put an end to the goalie carousel that has followed the Flyers since Ron Hextall left.  Fans want to see if new guys like Scott Laughton can step into the fold and contribute immediately.  They are pining for a chance at the playoffs this season since the team didn’t make the cut in last year’s lockout-shortened season.

To commemorate the 40 years that have passed since the Flyers have reached the top of the hockey world, here are 40 bold predictions for this upcoming Flyers season:

1. Vincent Lecavalier will return to form and score 30 goals this season.

3. Andrej Meszaros will be traded before the season starts and ends up staying healthy the entire season.

5. Although expectations are through the roof, Brayden Schenn will not have a breakout season and will be playing bottom-six minutes by the end of the year.

6. Steve Mason will start the season, but will eventually give up the starting spot to Ray Emery after a month.

7. Jakub Voracek, playing on Claude Giroux’s wing, will be top 10 in goals this NHL season.

9. Max Talbot will be traded prior to the trade deadline to make way for Scott Laughton.

10. Sean Couturier will be the most improved Flyers player from last season and score more points than his rookie season.

11. The Flyers will sneak in as the 4th spot in the Metropolitan Division and make the playoffs by the skin of their teeth.

12. Mark Streit will be the leading scorer of all Flyers defensemen.

13. The Flyers powerplay will be top five in the league.

15. On an epic playoff run, the Flyers will be bounced out of the playoffs in the Eastern Conference Finals.

16. The newest rivals will be the Buffalo Sabres.  Over the past few seasons, Philadelphia and Buffalo have had some very heated games, but this season takes it over the edge.  Oh!  And Ryan Miller will do nothing but complain about it.

18. Hartnell will lose his spot on the first line to Lecavalier by mid-season.

19. Fans will be calling for Holmgren’s head after the team starts the season off slow – but what else is new?

20. Somehow the Flyers make a trade for Keith Yandle and rob the Phoenix Coyotes blind further giving their fans less reason to come out to hockey games.

21. After an unimpressive start, Raffl gets sent to the AHL in exchange for Petr Straka.

22. Straka then underwhelms and is replaced by Akeson who immediately gels perfectly with Couturier and Read on the 3rd line.

25. Flyers and injuries go hand in hand.  A defenseman will go down for a month.  Gervais steps in and becomes one of the best defenseman on the team for a stretch, but will be relegated to 7th defenseman when said defenseman returns from injury.

26. The team will be top three in goals per game in the entire NHL.

27. Movember brings out the best mustaches the Flyers have to offer.  Timonen ends up growing the most rugged mustache on the team, but Hartnell does something creative to his duster.

28. Giroux comes back from Olympic break with a bronze medal, Timonen comes back with a silver medal, and Laviolette comes home with the gold.

29. Lecavalier will lead the team in faceoffs.

30. The Flyers will be undefeated against the Rangers during the regular season.

31. The holidays treat the team well and only lose one game on their ‘Circus Road Trip’.

32. The Flyers have two all-stars represent them – Claude Giroux and Mark Streit.

33. Ray Emery will get more than one loss this season.

35. On even strength, the Flyers will be a bottom five team in 5-on-5 goals for vs. goals against.

39. By seasons end, Read gets more ice-time than Hartnell.