The New York Rangers have a new general manager, but many of the same old problems. What they do have is hope, hope instilled by the acquisition of young players with lots of potential, and the promise of more acquisitions to come.

Last season the Rangers struggled to a fifth-place finish, once again out of the Stanley Cup playoffs. At the end of October, the team moved long time general manager upstairs to an un-named executive position and tabbed former goaltender Emile (The Cat) Francis as the new GM. Francis had been with the team since 1962 as the assistant general manager.

Francis wasted little time in getting to work. He made several quick deals, nothing earth-shaking, but barters for younger players such as Doug Robinson and John Brenneman. He had already helped engineer the deal with Toronto in February of 1964 that brought in captain Bob Nevin, along with defensemen Arnie Brown and Rod Seiling. While he didn’t come right out and say it, the Broadway Blueshirts had entered a full rebuild and The Cat had a plan.

If all the new hands remain on deck and offer full contributions, Francis’ plan may come to fruition sooner than expected. The more realistic expectation is that the Rangers endure some growing pains before they make a run at the NHL’s upper echelon.

At the end of last season the Rangers had a couple of veterans manning the crease who had each seen better days . Jacques Plante, whom many consider to be a future hall of famer, was inconsistent and plagued with various maladies, including a knee injury that eventually caused him be sent to Baltimore of the AHL. Journeyman Marcel Paille, who had played for the Rangers in brief parts of six different seasons since 1957 was brought in and supplanted Plante for a short while. Neither man gave the Rangers NHL-calibre netminding and it was clear to the former goalie Francis that changes were needed.

Planted expedited the process for Francis by announcing in June that he was retiring from hockey. While most hockey men doubt Jake the Snake’s sincerity, as of this writing, he has not strapped on his goalie gear for anyone.

Francis went to work and brought in three goaltenders from outside the organization to compete for the job between the pipes with one candidate from within. He traded Paille and three minor leaguers who did not figure in his plans to Providence of the American Hockey League for a relative unknown named Ed Giacomin (pronounced Jack-o-min). Giacomin has been with Providence since the 1960-61 season and has steadily improved since coming out of a Sudbury commercial league. At 26 and after a strong training camp, he may just be ready for NHL employment. Or, he might wilt under the pressure of facing NHL shooters with the real money on the line. Francis is gambling he’s up to it.

Two other veterans with NHL experience were acquired in June. Tall, lanky Cesare Maniago was picked up in a trade with Montreal for Earl Ingarfield and three minor leaguers. Francis then re-acquired Ingarfield when Montreal did not protect him in the Intra-League draft. Don Simmons, 34, was drafted from the Toronto organization after a fine season with Tulsa of the Central Professional Hockey League. He also spent time in the NHL with the Boston Bruins.

A fourth netminding candidate is 25-year-old Gilles Villemure. He had a solid season with Vancouver of the Western Hockey League last season and will be back on the west coast this time around. He got into five games with the Rangers in 1963-64.

As the season begins, Giacomin looks to have won the number one job, with Simmons as the backup. Maniago was solid in camp as well and will be only a phone call away if either of the other two falter. He’ll start the season in Baltimore.

Whoever is in goal for New York this season will endure many long nights behind this defense. Aside from Harry Howell, who is a bona fide NHL all-star, the defense is young and inexperienced. The man with the most NHL time next to Howell is Jimmy Neilson, and he’s only 23 with three big-league seasons behind him. Wayne Hillman is 25, but his two NHL seasons with Chicago were less than impressive. He made the team out of training camp, but will be pushed for regular duty by youngsters Arnie Brown and Rod Seiling. Both were picked up from Toronto in the Andy Bathgate trade late in the 1963-64 season.

Brown took a regular turn last year. He is fearless, with a wide mean streak and surprisingly mobile. But he’s also prone to mistakes that come with the enthusiasm of youth. If the Rangers exercise patience with him, he might be a good one.

Seiling, who is only 20, was the key piece of that deal that sent Bathgate to Toronto. He is a smooth-skating puck mover, and an excellent passer. He is not the physical defender type loved by the Gallery Gods in Madison Square Garden, but his immense talent, once he gets his feet on the ground in the NHL, will win him many fans.

Howell has his work cut out for him in mentoring these kids. But if they all eventually realize their potential, the pain the Blueshirts are going to endure now will have been worth it.

One of the tasks Francis gave himself was to improve the Rangers’ depth up front. Through his various deals, he brought Brenneman and Robinson, along with Johnny McKenzie and Ray Cullen (Chicago), Billy Knibbs (Boston), and Garry Peters (Montreal). All are relatively young and are considered to have good chances at regular NHL employment.

Rangers do have two very good forward lines. Jean Ratelle has developed into a competent NHL pivot and centres Rod Gilbert and Robinson on the first unit. Gilbert has established himself as a very good right winger and should get all-star consideration if he continues to show progress. The worry with Gilbert is his wonky back. He missed most of the 1961-62 campaign recovering from spinal fusion surgery and has had similar troubles this fall.

The second line has former Montreal veterans Phil Goyette and Don Marshall at centre and left wing, with team captain Bob Nevin on the right side. Nevin, now 27, has rounded into an excellent two-way winger with a nice scoring touch. His leadership abilities led to his being named captain of the team last season.

The third line will be a bit of a potpourri of whoever is left over. Ingarfield figures to be the middle man with any number of hopefuls for the wings. Among them is truculent Vic Hadfield, who scored 18 goals last year, but plays an undisciplined game. Others in the mix are former Hab Billy Hicke, McKenzie, Peters and Lou Angotti.

Red Sullivan returns behind the bench for the Rangers once again. He has been coach of the team since December of 1962 and has yet to guide the team to the playoffs. Francis will want to see progress with this team, especially with the youngsters, and if they aren’t going to develop under Sullivan, he’ll be shown the door rather quickly. He is the most likely NHL coach to be dismissed this season.

It’s a situation that’s pretty simple to analyze for the Rangers. Too little experience, too little skill. The Rangers must have everything turn out just right to even stay ahead of Boston and avoid the NHL cellar. Right now, it doesn’t look like they have the horses to accomplish that. But keep the faith Ranger fans – if the youngsters Francis has brought in turn out the way he hopes they will, better days are definitely ahead.

Terrible Ted Lindsay will not be returning to play another season for the Detroit Red Wings. That became clear yesterday when he was informed by the league that he is being blocked by the Toronto Maple Leafs.

Lindsay announced his retirement for the second time at the end of last season. While he had in the back of his mind an idea that he would like to return for one more go-round, he didn’t want Detroit general manager Sid Abel to waste a valuable roster spot by protecting him in the Intra-league draft.

Imlach had already gone on record as saying if Lindsay was not protected, he would draft him. Lindsay then said he was retiring to prevent Toronto from selecting him.

What Lindsay didn’t know was that the NHL has a rule in place to discourage such a ploy. Once a player signs retirement papers, the only way he can return to active play within a year is to gain permission from the other five NHL clubs. The Leafs denied him that permission. Imlach confirmed:

“The heck with him. I remember a story last summer where Lindsay said he put himself on the (retired) list because he was afraid I would draft him and he didn’t want to come to Toronto. I might have spent the $30,000. Now I can say ‘no’ and it doesn’t cost me a cent.”

For his part, Lindsay explained his rationale for his actions. He said that if he had been drafted by another team and refused to report he would have been suspended.

“I didn’t like the idea of spending the rest of my life on the NHL suspended list.” 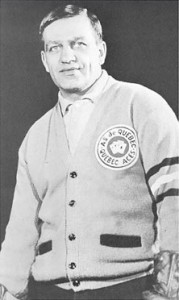 Bernie (Boom Boom) Geoffrion, former Montreal Canadiens superstar who now coaches the Quebec Aces of the American Hockey League, says he has rejected a five-year, $35,000-a-year contract offer to come out of retirement and play for the Toronto Maple Leafs.

“I have thought about my affairs and I am no longer interested in the offer at all.

“All my hockey time has been with Canadiens and I want to end my career in that organization. I am coach of the Aces and I want to remain in that position.”

Montreal general manager Sam Pollock has filed an official tampering complaint with the NHL. Pollock says that Geoffrion is still Montreal property, having retired a year ago, and no NHL team has the right to approach him without their permission.

Punch Imlach, Toronto’s general manager, says he has no knowledge of any such offer to Geoffrion. It is believed Leafs president Stafford Smythe personally approached Geoffrion.

At the testimonial dinner to honour Frank Selke held last Monday in Montreal, Conn Smythe said he wanted to clear up a long-held notion that he and Selke were bitter rivals. Selke began his hockey management career working for Smythe in Toronto.

“I don’t suppose there ever was greater respect by two men for each other’s ability. Selke deserved to be running a club in the big league. I didn’t want it to be the Toronto club because that was the job I left when I went overseas. When Senator Raymond (owner of the Canadiens) asked me whether Selke could rebuild the Montreal club I told him I told him he couldn’t find a better man. That’s the real story of a legendary feud.”