Bill Hay, the big Western Canadian  who used to centre for Bobby Hull, was the big star last night for the Chicago Black Hawks as they decimated the Boston Bruins 6-2 in Boston.  The game was the only one scheduled in the National Hockey League.

Hay, up until the Hawks got off to a slow start this season, was the pivot on Hull’s line for five years.  Early this year, with Chicago mired in fifth place, coach Billy Reay replaced him with the younger Phil Esposito.  While the move has worked out wonderfully for the team, Hay has had to re-invent himself and has done so very well.

Hay now centres the third line, takes shifts at left wing and kill penalties.  And on nights like last night, he contributes offence as well.  He paced the Chicago attack against the Bruins with two goals and two assists, his finest performance this season.

Other Chicago marksmen were Ken Wharram, Dennis Hull, Chico Maki and Pierre Pilote, who also contributed two assists to the cause.  Hay’s first goal, and the one scored by Pilote, came with Chicago killing penalties. 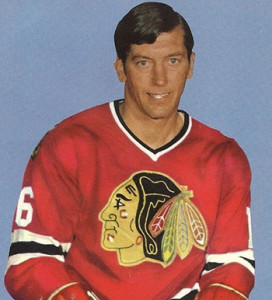 Teddy Green and Murray Oliver were the Boston goal-getters.

The match was a sloppy affair, with missed passes and poor defensive work.  Glenn Hall, playing his first game in goal for Chicago after sitting for six, was the difference.  Hall made 27 saves and twice stopped sure goals while flat on his back.

Bobby Hull, leading the NHL in goals, was kept off the scoresheet for the third consecutive game.

The Hamilton Red Wings got a late goal from Real Lemieux to salvage a 6-6 with the St. Catharines Black Hawks last night in Hamilton.  In the other OHA game, Bernie Parent’s goaltending enabled Niagara Falls to edge the Peterborough Petes 4-3.

In Hamilton, the Red Wings twice had two-goal leads, only to eventually fall behind the Garden City crew.  It took the power play goal by Lemieux with only three seconds left in the game to give the Wings the tie with the Hawks.  Hamilton led 3-1 at the end of the first period, and 4-2 after two. 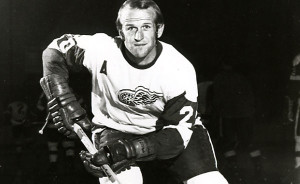 Goldsworthy pots a pair for Niagara

Bill Goldsworthy paced the Niagara Falls attack against Peterborough with two goals.  Derek Sanderson and rookie Jean Pronovost had the others.  Danny Grant, Jim Paterson and Mickey Redmond replied for the Petes. 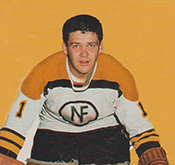 Peterborough held the edge in play throughout the game, but were stymied time and time again by Parent’s heroics. He was particularly sharp on two Peterborough power plays in the final frame.

Punch Imlach, manager-coach of the Toronto Maple Leafs, finished his jury duty yesterday.  Imlach was selected as a juror for a rape trial, but was, for the second day in a row, excused after he was challenged, this time by Crown Counsel Lloyd Graburn.  He had been accepted by defence counsel Morton Greenglass.