GOAL!!! @Sceviour7 nets his third career goal to immediately put the #Stars up, 2-0! That’s 3 goals in 4 games for him. #GoStars

It’s great for Texas Stars fans to see Colton Sceviour, one of the handful of ‘original’ Texas Stars and this season’s leading goal scorer in the AHL, scoring for Dallas in the NHL. It’s also funny listening to the media. When an AHL goal scorer like Sceviour reaches the NHL and struggles to score, they say “Well of course, it’s different in the NHL, here everything’s bigger faster stronger” and when that player reaches the NHL and scores they say “Well of course, this is practically all he did in the A.”

I’m still haunted by the departure of the Houston Aeros. Far and away one of the larger fan bases in the AHL was simply abandoned in the span of about three months. Just as despicable, while the Iowa Wild had begun selling season ticket packages, top brass in Houston refrained from making the official announcement on their website that the team was leaving until there were no more tickets to sell. It was a horrible slap in the face to thousands of fans who made the Aeros one of the league’s top draws for years. If any city deserves to have their AHL team torn out from under them it’s Oklahoma City, largely because when it happens no one will notice.

Get With the Program Utica

Did cellar-dwellars the Utica Comets not get the memo? There’s a formula to building success with a new team: inaugural season, stack your team with overpaid veterans and create excitement with lots of wins and a strong playoff run; second season retain just enough veteran talent to back your way into the playoffs; third season who gives a sh*t everyone’s already hooked. 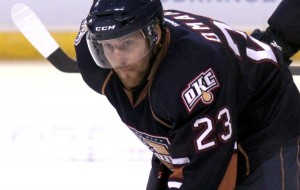 Sorry to sound like Jerry Seinfeld but what is the deal with Linus Omark? A point-per-game player in the AHL and a half-point per game player in the NHL gets traded to Buffalo for a conditional sixth round pick. As my colleague Josh Smith commented, “Is that all he’s worth?” You might think the Edmonton Oilers could use more scoring punch, sitting dead last and all. Maybe someone should remind Oiler brass that the Connor McDavid sweepstakes take place in 2015, not next spring.

Finally, in the AHL Highlights of the Week, at the 1:08 mark watch as Worcester Sharks forward Daniil Tarasov unleashes his inner Pavel Bure on the power play by individually beating four of the five Manchester Monarchs on the ice: he puckhandles through Zach O’Brien, drops a shoulder on Cameron Burt, toe-drags around Vincent LoVerde’s stick and finally beats Jean-Francios Berube with a killer wrist shot. Tarasov was the author of that great quote earlier in the season, “If someone scores three goals and no one throws a hat, is it still a hat trick?”