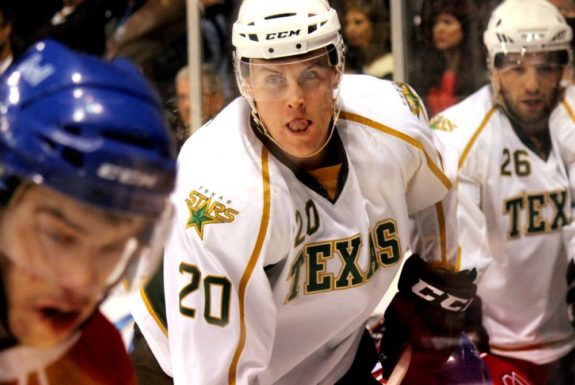 “Here we go again” was the mentality about a week into November of 2012 among the Texas Stars, who finished the 2011-2012 season dead last in the west and 29th overall, and who were 3-6 on the new season with three consecutive losses.

Then, they hosted the Lake Erie Monsters. It wasn’t Jack Campbell’s finest game, but watch for his salute to Marty Turco at around 2:42 and a spectacular glove save at around 3:00:

Despite losing the game in the shootout, the astonishing goals from Spongebob Squarepants (Cody Eakin actually, but you might not know it from the clip) and Matt Fraser gave this team life. They won 12 of their next 17 games, and earned standings points in 15 led chiefly by Reilly Smith, who found his scoring touch after struggling early on.

When the NHL labor dispute was settled in early January, some teams were hit harder than others. Texas lost Eakin, Antoine Roussel and Brenden Dillon permanently; others, like Reilly Smith, Alex Chiasson, Jordie Benn, Christopher Nilstorp, Jamie Oleksiak, went back and forth.

Yet, as dawn broke on 2013, Texas came out flying, winning 10 of 12 in January, but as winter turned to spring the team began to falter, winning  7 of 11 in February, 6 of 12 in March and 4 of 9 in April. The strong winter allowed them to finish 1st overall in the West, but just 8 points separated Texas from 8th seed Milwaukee.

In the Calder Cup playoffs, Texas beat Milwaukee in the quarterfinals before getting abused in the semifinals by, who else, Oklahoma City.

The first good news on the season is that reigning Louis A.R. Pieri Memorial Award winner Willie Desjardins is back behind the Texas bench for another season with assistant coach Doug Lidster.

Provided they remain in Cedar Park, it’s safe to say what to expect from now-four year Texas veterans Colton Sceviour, Travis Morin and Francis Wathier: Sceviour will likely be among the point leaders and continue to be a solid two-way player, Morin will pile up the assists provided he’s got the third incarnation of the Power Play one-timer on the wing (Greg Rallo-Matt Fraser- ?) and Wathier will do the dirty work and manage to work in anywhere between 30-40 points along the way. That said, Sceviour has been producing in the pre-season and has certainly earned a good look from Dallas brass. For his sake I hope he’s in Dallas on opening night.

Scott Glennie expected to miss 4-6 weeks with a knee injury.

Enormous. Texas fans won’t like it, but considering the talented prospect pool, they’ll like it more than what could happen at the NHL trade deadline if Dallas is a buyer.

Up in Dallas, new GM Jim Nill has flipped the Dallas Stars. Everything is new– including the beginnings. Despite numerous off-season acquisitions, from the standpoint of a player in Texas it should inspire optimism that call-ups will be frequent, giving guys incentive to play their best game. That, underwritten by the balance of veteran leadership and blue-chip prospect talent, should see the Stars make a deep run into the Calder Cup playoffs come June.

Breakout Prospect Prediction: Going out on a limb, I think Luke Gazdic will get his first NHL call-up this season. He’ll see fourth line minutes but Dallas may like his aggressive forecheck. Plus, say what you want about fighting in the NHL but Dallas lacks a heavyweight, and although Oleksiak has been throwing fists since Traverse City, Luke better fits that bill.