Up until this season, it has been quite some time since a New Jersey Devils affiliated team in Albany has qualified for the AHL Calder Cup playoffs.  To be precise, one must go all the way back to the John Cunniff led Albany River Rats, during the 1999-00 season.  Even more exact, the last home playoff game in Albany, played by Devils farmhands, came on April 17, 2000, a 2-0, Game 4 victory, topping the Rochester Americans, at the then-Pepsi Arena.  That contest evened the series but two days later, Albany would be ousted by that same score in Western New York.

With apologies to the Lowell Devils, who qualified for the playoffs under John MacLean and lost 4-1 to the Worcester Sharks in 2009-10.  Plus the Carolina Hurricanes affiliated editions of the River Rats, who made the playoffs in three of four seasons from 2006 to 2010, along with Michael Leighton’s 98 saves in a five-overtime contest in 2008 against the Philadelphia Phantoms (the longest such contest in AHL history) and a first round sweep over the Wilkes-Barre/Scranton Penguins in 2010.  This list focuses on the glory days of when the Devils were River Rats, in their first go around in Albany.

On April 15, 1994, Albany tasted its first playoff game and success.  Playing Game 1 of their opening round series at the Portland Pirates, the River Rats stole home ice with a 3-1 victory.  During the second stanza, Jeff Christian posted the first goal in Albany playoff history.  Scott Pellerin netted the eventual game-winner, at 10:29 in the third period and Corey Schwab recorded 31 saves in victory.  The first home playoff game in Albany history would come in Game 3, a 2-1 loss to the Pirates, on April 20, at the Knickerbocker Arena.

9.) End Of An Era; Rats Go Out Valiantly Against Amerks:

As mentioned above, the 1999-00 campaign marked the final playoff run for a Devils affiliated club in Albany.  That season the River Rats posted a losing record for the first time in franchise history, going 30-40-7-3 (70 points).  Conversely, the Amerks won the Empire Division that season, going 46-22-9-3 (104 points) and would eventually advance to the Calder Cup Finals, before losing to the Hartford Wolf Pack.  Albany had no business being in this series and after dropping the first two contests at Rochester, by a combined 8-0, the front office initially didn’t bother to print tickets for Game 4.  That is until the Rats fought back.  In Game 3, Sasha Lakovic threw his weight around and for some reason, I still don’t know to this day, Albany fans reigned down chants on Amerks defenceman Doug Houda and the Rats won big, 5-1 on April 16.  The next day, April 17, there would be a Game 4 and an intense one at that.  Frederic Henry, who stopped 37-of-38 shots in the previous game, turned back all 41 shots he faced in Game 4, posting a 2-0 shutout.  Stan Gron beat Mika Noronen on a penalty shot, at 18:31 in the second period and Steve Brule topped it off with an empty-netter.  Albany would drop Game 5 and the series by that score in Rochester but they put up one heck of a fight.

8.) Steve Sullivan Is All Aces Against Cornwall:

Although they didn’t win the Calder Cup, as they did the previous season, the 1995-96 edition of the River Rats, may have been the best team in Albany AHL history.  That squad won 54 games and totaled 115 points.  Much like this season with the Albany Devils, the New Jersey Devils did not qualify for the Stanley Cup playoffs.  Fair or not, the chemistry with the players sent back down, never quite clicked as it did earlier in the year.  One guy who didn’t seem to have any ill effects of being sent down was Sullivan.  Sullivan, who led the Rats with five shorthanded goals and six game winners, served as a spark plug with New Jersey, as the Devils went 9-3-4 with him in the lineup that season.  On April 21, 1996, Albany hosted Game 1 against the Cornwall Aces.  It was a game that saw the Rats demolish the Aces, 5-0.  In that game, Sullivan tallied two goals, the first of which was a memorable wraparound goal.  Defenceman Bryan Helmer also added a pair of goals and Mike Dunham stopped all 27 shots for the shutout.  Unfortunately, the River Rats would shockingly lose that first round series to Bob Hartley’s Aces, 3-1. 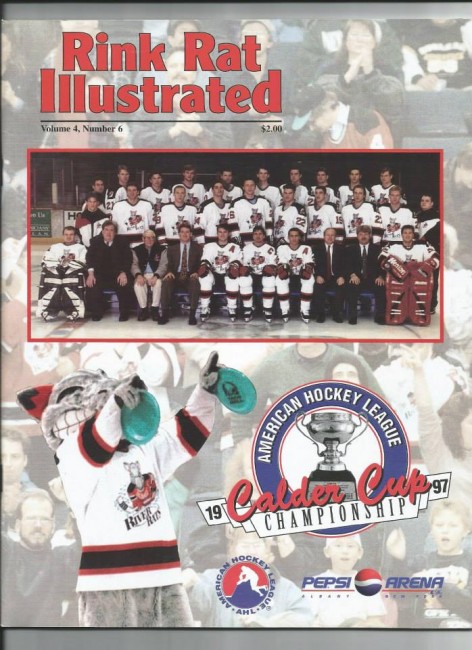 With a new bench boss in Cunniff, in 1996-97, the Rats were back in the playoffs and back with a vengeance.  Facing the hated I-87 rival Adirondack Red Wings, it didn’t take too long for things to get nasty.  Albany split the first two contests at Glens Falls, one of which saw a brawl that resulted in a suspension for Krzysztof Oliwa.  However, Oliwa would appeal the suspension and dress for Game 3 in Albany.  Oliwa then went on to undress the A-Wings, scoring two goals in a 7-3 Albany victory.  Also of note in that contest, the club set three playoff records for most goals (7), most power play goals (5) and most goals in a period (5).  While Oliwa was finally forced to serve that suspension by Game 4, it was too late for Adirondack.  On April 24, 1997, the River Rats clinched a playoff series at home, for the first time in franchise history, winning 4-1.

A seesaw, slug it out series, which saw Albany grab a 2-0 series lead, before trailing in the series to Rochester 3-2.  After dropping Game 6 at home, 6-2, Albany rebounded at Rochester in Game 7, winning by a final count of 6-2.  In this series, Albany won two overtime contests, in games 1 and 4, on goals from Sheldon Souray and Rob Pattison.  On May 14, 1997, in the more convincing Game 7 road victory, Zdenek Skorepa netted the eventual winner at 15:29 of the second period and Peter Sidorkiewicz recorded the victory.

The final deep run of a Devils affiliated team in Albany, saw the 1997-98 Rats reach the Conference Finals for the second consecutive season.  While they fell to the eventual Calder Cup champion Phantoms in the six-game Western Conference Finals, Albany ran roughshod over a couple of teams to get there.  The River Rats first swept the Red Wings 3-0, in the Empire Division Semi-Finals, capped off by a 3-2 overtime winner by Jeff Williams, at the Glens Falls Civic Center.  In the Empire State Division Finals, Albany avenged its Northern Conference Finals loss from the year prior, sweeping the Hamilton Bulldogs, 4-0.  If the late Peter Zezel had remained on this team for the entire season, I truly believe that this team could’ve won the Calder Cup. The run to the 1994-95 Calder Cup, began with a Northern Division Semi-Final sweep of the rival A-Wings.  Albany took Game 1, 2-1, backstopped by Schwab and a winner by Curt Regnier, at 2:15 of the third period.  With Dunham in net for Game 2, Albany secured a 4-3 victory, on a winner by Pascal Rheaume, at 5:04 of the third period.  Up in Glens Falls for Game 3, with Schwab back in net, Albany won 4-2, with Bill Armstrong posting the winner at 11:57 of the second period.  Finally, on April 19, 1995, with Dunham in the cage for Game 4, it was a convincing 5-1 victory for the Rats, with Ricard Persson potting the winner at 5:20 in the second period.  The series made a statement and signaled a changing of the guard in Capital Region hockey dominance.

Many had expected a rematch between Albany and Portland but instead it was the hard-charging Providence Bruins to face Albany in the Northern Division Finals.  It was an epic six-game set.  Albany won the first three affairs, which were all decided late.  The Game 1 winner went to Brule, at 18:59 of the third period, as the Rats won 6-4.  Matt Ruchty scored at 5:29 of OT, icing a 5-4 Game 2 victory.  In Game 3, Rob Conn, who along with Pellerin, scored two goals, gave Albany a 7-6 victory, netting the winner at 18:22 of the third period.  Games 4 and 5 didn’t get any easier, as the wheels fell off a bit, given a week layoff, due to the circus at the Providence Civic Center.  The River Rats lost those two contests by a combined count of 9-0, dropping their only home game of the playoffs in Game 5.  Yet the Rats would rebound on May 13, 1995, in Game 6 at Providence, winning 6-3, Armstrong posted a goal and two helpers and Sullivan potted the eventual decider at 10:46 of the third period.

On May 20, 1995, in Game 1 of the Calder Cup Finals at the then-Knickerbocker Arena in Albany, the Rats played host to the Fredericton Canadiens.  A still Albany playoff record attendance of 7,985 fans, witnessed a 4-3 Rats victory.  Brule, who scored a franchise record, nine goals that postseason, potted the eventual winner at 9:18 into the third period.  Schwab made 20 saves in victory.  That capped off an astounding mark of 21-0-6 for the Rats on Saturdays.

On May 26, 1995, at Fredericton, the River Rats completed a (4-0) Calder Cup championship series sweep of the Fredericton Canadiens.  A 3-0 victory gave Albany its first and only Calder Cup title in franchise history.  Vadim Sharifijanov, Cale Hulse and Pellerin, tallied the goals for Albany.  Forward, Ruchty led the squad with 15 points in 12 games.  Goaltenders Schwab and Dunham were awarded the Jack A. Butterfield Trophy, as co-MVPs of the playoffs.

Leading Head Coach Robbie Ftorek to opine,   “There is no practice tomorrow, because there is no one left to beat.”