What were road blocks for the Albany Devils last season are just speed bumps for the Albany Devils this year. Led by Joe Whitney, Keith Kinkaid, and a host of new faces, the A-Devils have put together a three-game winning streak at the mid-way point of November after a rough opening to the month. With a weekend sweep of the Hartford Wolf Pack and the Syracuse Crunch the Devils are second in their division and sixth in the Eastern Conference with 19 points.

Changing of the Guard

After sixteen games last season the Devils were a dismal 4-7-0-5. Some of their top players from that point a year ago have moved overseas or graduated to the NHL. In their place on the Devils roster are younger and hungrier players including a trio, Scott Timmins, Reid Boucher, and the returning Whitney, who have put together one of the best lines in the AHL. Through sixteen games this year these Devils are 9-6-0-1, which is quite a turnaround considering the turnover of the roster. The newcomers, Timmins and Boucher, have put together 13 and 12 points, respectively. Whitney, their leading scorer who did not play much early last season, has already compiled 15 points. Captain Rod Pelley has put up two goals and two assists in his first season back with the Devils organization. In five games since being loaned to Albany from the parent club on November 5, Rostislav Olesz has a goal and three assists. Riley Boychuk, acquired from the Buffalo Sabres organization this past summer in exchange for New Jersey defenseman Henrik Tallinder, scored his first AHL goal in their win over the Wolf Pack Friday night. Rookie defenseman Reece Scarlett notched his first professional goal, the only regulation goal for Albany in their win over the Crunch, in their last game Saturday.

If Albany was tied beyond overtime last season Devils fans had good reason to worry. Overall, the Devils missed out on a dozen points with their league-leading twelve shootout losses. Through their opening sixteen games last year the Devils lost all five games that went to a shootout. On the contrary, this season the Devils have a winning record after three shootout battles (all on the road no less). After not scoring a single goal in their first five shootout attempts this season and losing their first shootout game in Norfolk the Devils have buried three chances in six attempts and won two straight shootout games. This includes their latest victory, a 2-1 win over the defending Eastern Conference Champions in Syracuse. The Devils are poised to make sure they do not let shootout points slip away in the standings this season.

Even more remarkable is the fact that the Devils this season have survived the call ups of their best players which is part of the inevitable for AHL teams. First, Eric Gelinas was called up to New Jersey after five games in which he scored a goal (a PPG at Norfolk in the first half of a back-to-back set last month) and added a pair of helpers. He was +3 at the time of his call-up and his quick thinking and ultra hard slap shot were the catalysts for the A-Devils power play. After he made the drive to Newark (which you can read about right here courtesy of New Jersey Devils Hockey Writer Dan Rice), Albany struggled with the man-advantage. In their next six games they scored just two goals despite having 27 opportunities.

With the power play already struggling, the Devils recalled the A-Devils top goaltender Keith Kinkaid and then the Devils promoted defenseman Jon Merrill, still fourth on the team with seven points, to New Jersey after his high level of play through eleven games. To make matters worse for Albany, Timmins has sat out their last four games with an injury.  Lastly, in a bizarre turn of events, Cam Janssen had a pair of goals in his bank but unfortunately for Albany he spent them in New Jersey after he was recalled on November 7. (Read about Janssen’s unexpected goal scoring touch as written once again by Dan Rice)

However, the 2013-14 Albany Devils are different. Instead of being swept up in the chaos, they remain focused and step up when necessary. In their first game without both of their top defenseman the Devils even survived a storm within a storm at the Wilkes-Barre/Scranton Penguins on November 8. The Devils opened the scoring with a goal from the slot from Reid Boucher and eventually brought a 3-1 lead into the second period. Mike Sislo added his second tally of the night in the second period after Olesz forced a giveaway from Nick D’Agostino and despite a pair of Penguins goals the Devils still brought a two goal lead into the 3rd period. Then it all unraveled. Mike Carman scored his first goal of the season for the Penguins 1:19 into the 3rd and then 46 seconds later Chris Conner knotted the game at 5. The Penguins controlled much of the final period and outshot Albany 13-7 but in Kinkaid’s first game back with Albany following his call-up he held down the fort for the Devils including a pair of stellar saves on a shorthanded Brian Gibbons breakaway and the ensuing Andrew Ebbett rebound. Shortly thereafter, Sislo scored on the same Devils power play and completed his hat trick. The Devils held on for the 6-5 win. 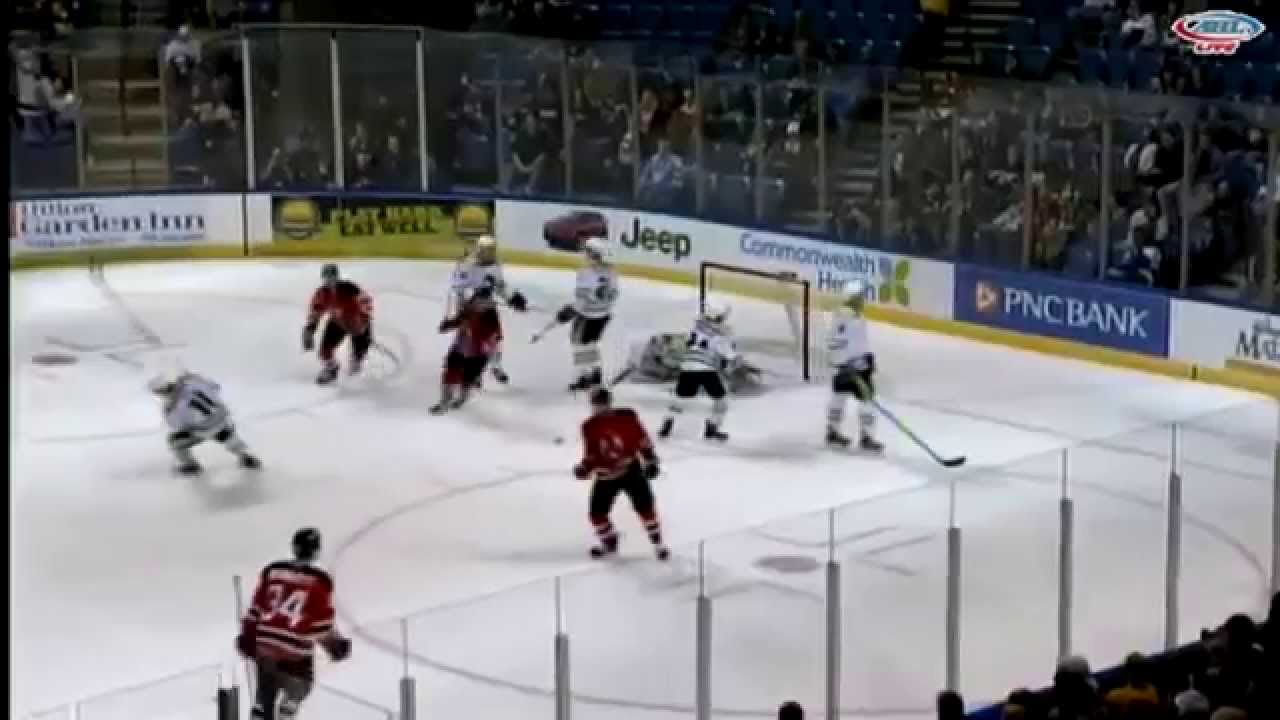 Despite a 2-0 setback at home to the Adirondack Phantoms the following night in their first game without Timmins, the Devils enter this week riding a three game winning streak. They soundly defeated Bridgeport on Veterans Day 5-2 after jumping out to an early 3-0 lead and withstanding the Sound Tigers rally. The hot play of Boucher continued as he picked up a goal and an assist. Pelley scored his first goal back in the Devils organization and Kinkaid stopped 25 of 27 Bridgeport shots.

The Devils opened their weekend in Hartford Friday night and won 3-0. Against the Wolf Pack, the Devils scored early with Boychuk scoring on the doorstep for his first as a Devil. An odd man rush with Whitney and Olesz led to the Devils second goal. Olesz was patient and after getting behind the sliding Wolf Pack defenseman Aaron Johnson he feathered a pass to Whitney where he buried his team leading 7th goal of the season. Pelley scored for the second consecutive game by potting an empty netter while Kinkaid picked up his sixth career shutout for the A-Devils. The next night the Devils completed the weekend sweep with a thrilling 2-1 shootout victory over the Crunch. Kinkaid, a winner of six straight games and all four since he returned to Albany, stopped 29 of 30 Crunch shots to lower his GAA to 1.97 and raise his save percentage on the season to a stellar .922.

Looking Towards the Final Five Games of November

The Devils remaining five games this month are crucial at this juncture of the season. All five games are against divisional opponents. Their next game will be at the Times Union Center on Wednesday night against the Wolf Pack where they defeated them 4-3 last month. On Friday night the Devils travel to Springfield where they will play the Falcons for the first time this season. Last season the Devils took two of three in Springfield. The following night the Devils will head to Glens Falls for the second time this season. In their last game in Adirondack earlier this month, the Devils fell 3-1. Less than a week later, the Devils finish their home and home with the Phantoms when they host their heated rivals. In a pair of games this season at home against Adirondack, the Devils won 4-1 in their third game of the season and got shutout in their aforementioned last meeting. The Devils end the month on home ice by playing the Sound Tigers for the second time this season. The Albany Devils will be looking to remain ahead of all their divisional mates and also to leapfrog the Springfield Falcons.