Watching your name drop in the rankings from month to month can never be easy.  More so if your name was being mentioned as a possible 1st round draft pick.  It’s been an up and down season for Quebec’s Anthony Duclair.  From an ankle injury early in the season, to getting suspended a few games by GM Patrick Roy, to being selected to the Top Prospects Game, to finishing the season 4th in scoring on the team, Duclair has been through adversity all season. 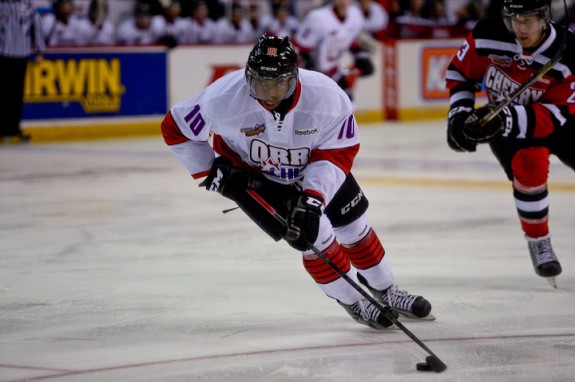 Place of birth: Pointe-Claire, QC, CAN

From First Round Pick to Sleeper Pick

Watching your name drop in the rankings from month to month can never be easy.  More so if your name was being mentioned as a possible 1st round draft pick.  It’s been an up and down season for Quebec’s Anthony Duclair.  From an ankle injury early in the season, to getting suspended a few games by GM Patrick Roy, to being selected to the Top Prospects Game, to finishing the season 4th in scoring on the team, Duclair has been through adversity all season.

His name doesn’t carry the aura it once did, but if he drops to the 2nd or 3rd round, one team is going to be getting a very good player.

Speed is Duclair’s forte.  He’s beaten many defenders with his quick acceleration and consistent top speed.  He isn’t a big player, so he’s figured out other ways to use his size effectively.  His puck control is a key asset and slick stick work allows for him to find openings all over the ice and use his heavy wrister.  The Quebec native’s accuracy behind the shot may need a touch of work, but he certainly packs a punch with the amount of power behind each shot.

The main issue that may need dedication is his play on both sides of the puck.  Duclair is known for offensive instincts, but his defensive play could still use some brushing up.  He’s shown flashes of great defensive play – for example, during the Top Prospects Game – and has worked on his two-way play, but he lacks the consistency game in and game out.  He also needs to slow his game down a bit to be better equipped at the next level.

For a shorter player, Duclair does know when to mix it up.  He won’t back down from a larger opponent and willingly goes into areas of the ice where he know he’ll have to take the body.  He carries the puck up with confidence and possesses above average hockey sense.

Seeing him ranked so high may have given him a sense of entitlement early in the season, but even if he falls, one team is coming away from this draft with a potential offensive weapon on their hands. 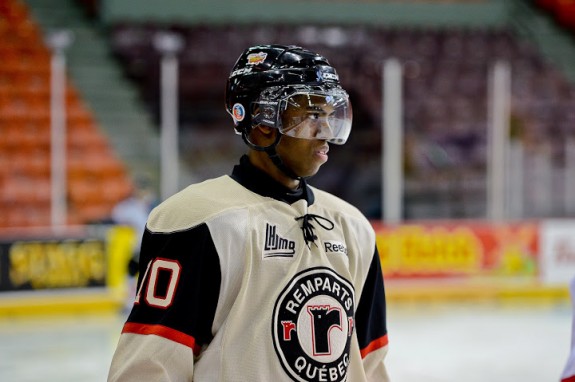 At this point, it’s safe to say he will likely be an early-to-mid 2nd round pick.  However, you can’t count out any GM for wanting to snag him late in the 1st round.

“Duclair has elite foot speed and can accelerate as well as any player in the QMJHL. He entered the league fairly slight, but has put on significant weight since and it has helped his game around the crease. He was slowed down a little bit by an ankle injury earlier this season but he’s back to his usual self now blowing by defenders and setting up his teammates at full speed. With his lethal combination of speed and skill, he has all-star potential but will have to improve his all around game to realize it.”

“A highly skilled forward, Duclair has some really strong goal-scoring ability and is a good distributor of the puck. Having battled some injury troubles already this year, Duclair now will be without regular linemate Mikhail Grigorenko. His offensive instincts to go along with high-end speed should help him overcome losing an elite linemate.”

“Duclair possess one of the best skating strides in the entire 2013 draft class. The first thing that jumps out about him is the high speed he plays at. He consistently beats defensemen out wide. His acceleration is very impressive and he gets to his top speed very quickly. He’s incredibly agile and a very shifty skater. He has very impressive puck skills considering he’s constantly at high speeds. Duclair has the puck on a string at times, and can make defensemen and goalies alike look silly. He’s very creative with the puck on his stick and is incredibly dangerous 1-on-1 or on a breakaway. His shot is accurate and comes off with a good release. He has the ability to make crisp, accurate passes and find open teammates but is considered more of a finisher.”

My interview with Anthony Duclair

Duclair’s interview with Buzzing The Net

Duclair suited up for Team Canada twice during U17 play.  He played in 10 games and had 5 assists.  In the U18 Junior World Championship he one goal and one assist in 5 games.

– With his quick speed, deceptively fast release, and ability to drive the puck to the net, the closest comparison would be Winnipeg Jets’ Evander Kane.  They seem to be one in the same.

– Hall of Fame comparison: Valeri Kharlamov.  Kharlamov wasn’t the biggest guy, but he certainly put on an offensively display night in and night out.  He was also speedy and created scoring opportunities for himself and his teammates.

Off the Iron (Interesting Notes):