Let’s face it: the race for the Pacific division title last year was about as exciting as watching ice freeze at the Honda Center. The Anaheim Ducks started the campaign white hot, bolting out to an insurmountable lead by midseason, and then hung on despite cooling considerably. The Los Angeles Kings tried to make things interesting with a second-half surge, but still finished seven points behind at the end. The San Jose Sharks were up-and-down, just good enough to make the dance, and the Phoenix Coyotes and Dallas Stars pretty much stunk up the joint.

Just in the nick of time, the 2013-14 NHL season is now at hand, with the promise of realignment intrigue as a major early theme. The Pacific division has undergone a back-to-the-future-ectomy, with the onetime Pacific stalwart Vancouver Canucks rejoining the division after fifteen years to ramp up the competitiveness within its confines. The Canucks bring with them the young, up-and-coming Edmonton Oilers and the rebuilding Calgary Flames and wave buh-bye to the downtrodden Dallas Stars along the way.

Already possessing three playoff teams (Anaheim, Los Angeles and San Jose) from last season, the Pacific promises to be even more of a battle with the Sedins skating about and all those top draft picks maturing rapidly in Edmonton. The only team without a realistic shot (beyond a snowball’s chance) at the crown appears to be the Calgary Flames. More on that in a few minutes.

Granted, once the postseason starts all the regular-season records are essentially rendered moot, but positioning can absolutely make the difference between a series win or loss. Thus, how the teams fare in the first 82 games matters. With that said, the following is a prediction of how the Pacific will stack up when things are all said and done this year.

Love ’em or hate ’em, on paper the Kings are pretty freaking loaded. Jeff Carter, Anze Kopitar, Dustin Brown, Justin Williams and Mike Richards have all potted 30 in at least one previous season, and as of this writing, only Williams is north of 30 years old. On defense, Drew Doughty, Slava Voynov and Jake Muzzin can turn the lamp red with aplomb, Matt Greene and Robin Regehr can turn faces red with well-timed elbows and one of the NHL’s best imitations of an agile spider resides between the pipes in Jonathan Quick.

Sure, there are questions, such as whether or either Matt Frattin (7 goals in 25 games) or Tyler Toffoli (28 goals in Manchester) can earn a regular spot on the 2nd line, how high Slava Voynov’s ceiling really is or if the team will miss Jonathan Bernier, but the bottom line is this: the Kings won the Cup two seasons ago, reached the conference finals last year and with all their major pieces locked in long-term, appear to be the team most likely to win the division.

The Sedins take their talents to the Pacific this season.

The Canucks finished the abbreviated 2012-13 season with a 26-15-7 record (59 points), winning their fifth-straight Northwest division crown in the process. The Sedin twins were essentially point-per-game producers, Jannick Hansen was on a pace for career highs in both goals and assists if not for the lockout, Alexandre Burrows was still Alexandre Burrows (both good or bad) with 13 goals, the defense had three players with at least six goals apiece and despite the controversy, Cory Schneider and Roberto Luongo made for a pretty effective goaltending tandem.

The Canucks have more questions than the Kings, however. In a move that rocked two fan bases and sent shock waves throughout the league, Corey Schneider was traded to the New Jersey Devils for the #9 overall pick in the 2013 draft, which they then used to select London Knights center Bo Horvat. That move means Roberto Luongo and his somewhat shaken confidence will get another chance at being the man in Vancouver. Meanwhile, the Sedins will turn 33 in September, and depth on offense isn’t exactly a team strength. On the basis of star power and defense, look for the Canucks to capture second place in the Pacific division this year.

Why would a team that won their division relatively easily slide all the way to third in these predictions? To answer that question, one must do a post-mortem on the Ducks’ 2012-13 season and subsequent offseason. After starting 22-3-4, the the Ducks wobbled to the finish line, going just 8-6-4 in their last eighteen games, and then lost to Detroit in the quarterfinals. In July, they traded four-time 30-goal scorer Bobby Ryan for Jakob Silfverberg, Stefan Noesen and a 2014 first-round draft pick, and picked up declining left winger Dustin Penner, along with a number of role players.

The Ducks should still be reasonably solid, but with Silfverberg needing to prove himself at the NHL level and both Penner and Koivu aging, it feels like a transitional season in Orange County. Corey Perry, Ryan Getzlaf, Andrew Cogliano, Cam Fowler and Jonas Hiller are probably enough to get them to the playoffs, but a Pacific division title seems a bit unlikely at this juncture. 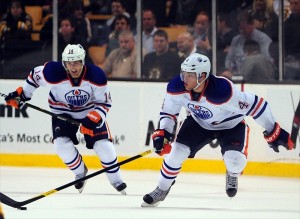 Maybe its wishful thinking, but just as with both Los Angeles and the Toronto Maple Leafs, seven may be the lucky number in Edmonton — seven missed playoff seasons, followed by a breakthrough campaign. Look at all the young guns in the Albertan capitol: Sam Gagner (14 goals), Taylor Hall (16), Jordan Eberle (16), Nail Yukupov (17), Justin Shultz (9) and goaltender Devan Dubnyk (.920 save percentage), amongst others. The Oilers are on the rise, and finished just 10 points outside of the playoffs in 2012-13.

The defense has to improve significantly for the Oilers to make the playoffs, which explains why they drafted Darnell Nurse, traded for Philip Larsen and signed Andrew Ference and Denis Grebeshkov. The smart money is on a continued rise in the standings, all the way to fourth in the Pacific and a real battle for a lower playoff seed this season.

San Jose has finished first or second in the Pacific an amazing ten times since the 2000-01 season. The cast of characters is familiar to everyone with even a passing knowledge of the NHL: Joe Thornton, Patrick Marleau, Logan Couture, Joe Pavelski, Brent Burns, Martin Havlat, Dan Boyle, Marc-Edouard Vlasic and Antti Niemi return for another try in 2013-14. They are always good — usually very good — and yet despite three conference finals appearances in that span, have failed to make an appearance in the Stanley Cup finals.

The phrase time heals all wounds is inversely proportional in sports, as players get slower and more brittle as they age. As a team, the Sharks are beginning to show the wear and tear, with a necessary rebuild seemingly right around the corner, especially if they miss the playoffs this season. Whether they make them this year is questionable and depends on whether or not the older stars can continue to bring it on a consistent basis every night. Due to these uncertainties, the Sharks are predicted to slip to fifth in the Pacific this year.

With the distractions of their ownership drama now resolved, the Coyotes can go back to focusing on how to return to the playoffs after misfiring in 2012-13. They are strong up the middle (Mike Ribeiro, Martin Hanzal and Antoine Vermette) and both Shane Doan and Radim Vrbata can pot 30 from the right side, but the left side is thin and outside of Keith Yandle, the defense lacks big-time scoring threats. Mike Smith is a bit crazy in net, par for the course for an effective goaltender.

As with Anaheim, this has the feel of a transitional year in the desert. There are too many moving parts, both on and off the field, to consider the Coyotes more than just a long-shot threat for the Pacific division and a fringe playoff team. 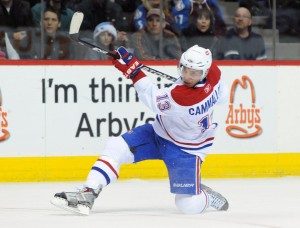 You have to feel for the fans in Calgary. Not only has the team missed the playoffs four straight years, but the legendary Jarome Iginla is now skating on the Eastern seaboard. Sure, there are some decent pieces still here, such as Mike Cammalleri, Jiri Hudler, Curtis Glencross, David Jones, Dennis Wideman, Mark Giordano and Mikka Kiprusoff, not to mention a passel full of youngsters on the way. However, much like with the obsessive/compulsive Wile E. Coyote, it seems as if the road is getting longer and longer, with some fowl creature mercilessly taunting them every step of the way.

It would really take some doing for the Flames to make a serious challenge for the playoffs this year, much less the Pacific crown itself. Nothing is impossible in the NHL, but at 200:1 odds, it may be the next closest thing. The good news for Calgary? Sam Reinhart may be waiting in the wings.