It’s suddenly and shockingly already that time of the season that Jackets fans know too well. It’s not as bad as Chris Wassel explains for the Devils, nor is it anywhere near as bad as the situation in Philadelphia. As Shawn Reznik says in his latest about the Flyers in his recent piece on the state of affairs in Philly: “The NHL is very much a “what-have-you-done-for-me-lately” type of league.” Well… Lately, the Jackets have dropped off of the face of the earth with regards to the hope and promise of a playoff run.

The Blue Jackets are in the midst of a 4-game losing streak and things suddenly look bleak. Sergei Bobrovsky seems to have lost some of his magic from last season. Marian Gaborik hasn’t scored in 4 games, and really, the rest of the Jackets are also having problems scoring as well. Penalties are stacking up on a game-by-game basis, and Blue Jackets fans are already getting restless. We’ll try to keep it positive in this week’s Blue Jackets Notebook, amidst all of this negativity. 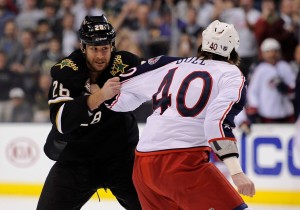 Jared Boll played in his 400th game in the NHL on Tuesday night, all of them spent with the Blue Jackets. In those 400 games, he has amassed a total of 989 penalty minutes, and he was involved in 2 fights on the evening. Not a bad performance on the night. Boll is chasing down Jody Shelly – the Blue Jackets all-time leader in penalty minutes – who sits at 1025 PIMs.

The Jackets scored with 46 seconds left in their game in Pittsburgh last Friday night. From that point to their next goal was an eternity, and I wasn’t confident the Jackets would score in the game against Ottawa either. By the time they scored again, the total time elapsed was 103:48.

On top of the ridiculous amount of time between goals? The two goalies they faced in the interim have a total of 34 NHL appearances between the two of them.

As a Miami University hockey season-ticket holder, I watched Jeff Zatkoff develop for 3 years in Oxford, OH and I know that he has the skills to be an NHL goaltender. He earned his first-ever NHL win against Columbus, and it was a shutout. Tuesday night’s game against Ottawa was more of the same. Robin Lehner has 31 appearances in the NHL and shut down the Jackets for 43 more minutes until R.J. Umberger’s goal at 3:02 of the third.

Against the Rangers on Thursday, the Jackets will face another backup. Head coach Alain Vigneault planned on playing his number 1 goaltender Henrik Lundqvist against Pittsburgh on Wednesday night and will likely sent out backup Cam Talbot on Thursday in Columbus.

The Jackets scored on the power play for the 9th time this season against Ottawa. They’re down to a more expected power play percentage at 18%, but I’m not at all upset with these numbers. Todd Richards still needs to get the power play to work if the annual climb up the standings is going to happen.

In a matter of just 5 days, the Jackets went from 9th place in the East and 1 point back, all the way down to 12th and 5 points back of the 8th and final playoff spot. Sure, there are a whole lot of games left, but judging by some of the boos I heard on Tuesday night, I’m guessing I’m not the only one who is a little worried about the current standings.

Highlight of the Week

Well, there aren’t many, but I do have to say that R.J. Umberger’s goal against Ottawa last night was pretty special. Take a look at this beauty:

Columbus finishes their 4-in-a-row/8-out-of-9 home stand this week against the 2 New York teams. Rick Nash was expected to make his return tonight with the New York Rangers, but an injury will keep him out of the lineup. The New York Islanders then pay Columbus a return visit on Saturday the 9th. The Jackets won the October 5th matchup on Long Island by way of a shootout.

Check out our partners at TiqIQ for the best deals on Columbus Blue Jackets tickets for all 2013-14 games.