On April 25, 2002, the St. Louis Blues defeated the Chicago Blackhawks in Game 5 of their Conference Quarterfinal Series.  Who knew that this would be the last series-clinching victory for ten years?

The Blues finally overcame the playoff-round winless streak, eliminating the San Jose Sharks from the 2012 playoffs Saturday night with a 3-1 victory at Scottrade Center.

“I’ve been here through a few ups and downs,” Blues defenseman Barret Jackman said.  “It’s very gratifying that I’ve been here the whole time and been a small piece of this puzzle.  It’s a great feeling right now.”

The first period went as expected.  It was a low shot count for both sides, 7-3 favoring the Blues, with no goals put on the board.  Hitting was apparent and some bad blood spilled over to the second period as Blues winger Chris Stewart and Sharks forward Tommy Wingels dropped the gloves and had an old-fashioned joust.

“Stewie [had] a really good fight tonight,” said Blues Captain David Backes.  “He’s finding ways to contribute and that’s what we need from each and every guy.”

The Blues came out to start the third period as calm as they have been all season.  Elliott made some saves early while his teammates waited for their chances to come.  The fourth line and the team’s veterans would be the ones to start the end of the Sharks’ season.

After Scott Nichol took a wrist shot from far out, Sharks goaltender Antti Niemi fumbled the puck on the top of his crease.  Jamie Langenbrunner was there to knock in the rebound while streaking to the net, marking his first goal of the playoffs.

Langenbrunner has earned the nickname “The Legend” from his teammates for a reason.

“He shows up again,” Jackman said.  “He’s stellar.  It doesn’t matter where he is in the lineup.  He’s a competitor and there is a reason that [Blues GM Doug Armstrong] went out and got him in the summer.  He’s a huge part of our success this year.”

It didn’t take the Blues long to take the lead and shut down the hopes of their opponents.  Just .45 seconds later, defenseman Alex Pietrangelo took a wrist shot from the right point and David Perron, who was cutting to the net, tipped it in midair, deflecting it past Niemi for the 2-1 lead at 12:01 of the third period.

Needless to say, Scottrade Center erupted with noise as the crowd was louder than they have been all season long.

“I hope the rivets in the roof are nice and tight because it was so loud in here,” Backes said with a smile.  “We’re trying to figure out a game plan for the next shift and make sure we get the puck deep and keep it in their end so they’re not scoring.  It was tough to hear those guys because of the awesome support from our crowd again tonight.”

“I couldn’t hear myself think,” said Brian Elliott, who had never won a playoff series before Saturday.  “My ears were ringing afterwards.  It was pretty incredible.  I’ve never heard anything like that.  Hitchcock has said that it’s going to get louder and louder as we go along so it’s going to get that much more fun.” 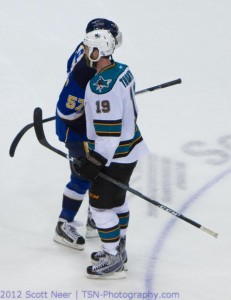 Andy McDonald capped off the victory with an empty-net goal at 19:21 of the third period.  It was his series-leading 4th goal and 8th point.

Elliott made 26 saves in the victory.  He improved his record to 5-0-0 against the Sharks during this season and the playoffs.

“He’s just a good goalie,” said Head Coach Ken Hitchcock.  “This isn’t a fluke [or] an accident.  Some guys take time to find themselves.  He’s a perfect example for us of less is more.  He’s a guy that has learned that he’s big and he can play big.  He’s no different than [Predators goalie] Rinne or any of these guys who learned to play inside the blue area and feel comfortable in there.”

It was the first series win for 13 of the 20 players on the ice for the Blues.  The champagne bottles were left uncorked and stored away as the team knows what lay ahead.

The young Blues did not seem to celebrate the victory the way that most people had anticipated.  While the excitement was apparent, the pads stayed on and players grouped together quickly to shake hands with the team that they just battled with for five games.

“It’s not like baseball where they celebrate all the time,” Elliott said.  “We’ve got a lot of work ahead of us and we don’t want to sit on this one for a while.”

Something that is prevalent throughout the Blues organization is that all of this (the coaching change, the battle for the President’s Trophy, the matchup with a Western foe) is a learning experience.  The players continue to be tested and keep coming ahead with flying colors.

Backes felt that the Blues’ loss to the Sharks in Game 1 was a perfect reminder that a 60-minute effort is needed every night in the playoffs.

“All this talk about President’s Trophies and Jennings Trophies… that means nothing,” he said.  “We had to have a reality check and say we need to play our best hockey every night or this team can beat us.  I think we had a lot of great performances that led us to a series win.”

At the end of the series, the Blues had nine different goal-scorers, including goals from Langenbrunner, Vladimir Sobotka and B.J. Crombeen, who have at one time or another played on the fourth line.  They had two different goaltenders receive credit for at least one victory.  Every forward who played in all five games registered at least one point.

“All 20 guys contributed one way or another,” added Backes.

The Blues and Nashville Predators are the only Western Conference teams to advance to the second round at the moment.  Both teams will await the victors of the Phoenix Coyotes – Chicago Blackhawks and Vancouver Canucks – Los Angeles Kings series before knowing who they will face in the Semi-Finals of the NHL playoffs.

“We know what it’s going to be like the rest of the way.  We have that experience and now we just have to keep pushing along and play our game.  No matter who it is [we face], we’ll play our game and hopefully we’ll come out on top.”