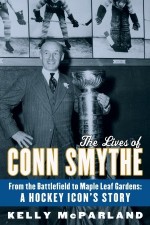 The Lives of Conn Smythe: From the Battlefield to Maple Leaf Gardens: A Hockey Icon’s Story

Once upon a time, there was a hockey club called the Toronto St. Patricks.  Then Conn Smythe came along.  The rest, as they say, is history.

Conn Smythe’s influence on hockey is well known and indisputable.  In many ways, the game and the league would not be the same as the one we follow today without him.  Besides hockey, though, who was Conn Smythe?  Kelly McParland embarked on the monumental task of delving into Smythe’s “lives” and relating the story of one of hockey history’s revered characters.  McParland summed it up best with the following statement in the introduction:  “this book is to remind people that Conn Smythe was not only the builder and owner of a hockey team but a fascinating Canadian who for forty years or more contributed enormously to the development of this country’s culture and character.” (xi)  He went on to explain that, despite the fact that everyone in the hockey world knows the name Conn Smythe, most know very little about the man.

McParland explored what he called The Lives of Conn Smythe.  The plurality of the title fit the many incarnations of Smythe’s life.  Despite some of the difficulties in researching a public figure – “Some of the details of his life are hard to authenticate with certainty.  Hockey men in the early years of the game loved a good story and weren’t overly fussy about details” – he pieced together a compelling and thoughtful biography of Smythe. (xii)  McParland was fortunate to be able to talk to those who knew Smythe, including his son Hugh, Frank Mahovlich, Howie Meeker, and Frank Selke Jr., and acknowledged the contributions of previous biographers, a variety of archives, Maple Leaf Sports and Entertainment, and the Hockey Hall of Fame (this list is not inclusive).

Part One: Poor Boy chronicled Smythe’s childhood.  His father Arthur was a writer and poet, among a variety of other things; his mother Polly, a free-spirit with a more than healthy taste for alcohol.  Through the stories of his childhood, McParland set the stage for the adult Smythe would eventually become.  His attraction to sports, desire for financial stability, and puritanical views on alcohol and work ethic were heavily based on these childhood experiences.  Interestingly, one theme McParland uncovered is Smythe’s constant reinvention of his past.  The reader will wonder with McParland if this was from embarrassment or for a more self-serving purpose – or likely a combination of the two.

Part Two: Builder jumped right into Smythe’s life of coaching and managing professional hockey teams, from the fledgling New York Rangers to the Toronto Maple Leafs and his eventual domination of the NHL itself.  Part Three: Warrior showed a side of Smythe most people do not even consider, that of the soldier.  He served in World War I and, as a demonstration of his staunch patriotism, quickly volunteered for service in the next conflict.  McParland discussed Smythe’s advocacy for soldiers honorably as would befit such a veteran.  Finally, Part Four: Mogul chronicled the later years of Smythe’s life and the legacy he hoped to leave to his family.

The cast of characters throughout the book read like a “who’s who” of hockey or, more likely for many younger readers, a list of hockey trophies.  James Norris, Frank Selke, Jack Adams, Art Ross, Maurice “Rocket” Richard, Lester Patrick, and many more were simply players, coaches, owners, and other peers of Smythe.  The early interaction between these revered figures was fascinating.

The book’s highlights were numerous.  Some of my favorites included the machinations of James Norris – who could imagine today that one person could have an influence on almost every team in the league simultaneously?  Then there was the legendary tale of how Smythe came to acquire the money to purchase King Clancy’s contract by betting on a horse race.

Hockey is a game of superstitions and the Maple Leafs are no strangers to eerie coincidences.  First is the story of Bill Barilko, whose plane crashed after the Leafs won one of their many Stanley Cups.  The crash site was so remote, it took eleven years before Barilko’s body was recovered – and the Leafs did not hoist the cup again until Barilko could finally be laid to rest. (265)  One should also consider that the Leafs have never won a Stanley Cup when there was not a Smythe at the helm.  In life Smythe strove to control many things and, apparently, maintains that influence in death as well.

Smythe’s life, both in and out of hockey, was well-worth the book and the time to read it.  The Lives of Conn Smythe provides readers with an interesting insight into the early years of the NHL and into the man many simply know as the namesake of the trophy given to the Stanley Cup MVP.