It will be intriguing to see what deals are done in the offseason to improve the Boston Bruins’ roster. Bruins general manager Don Sweeney got a good look of his youth in the first-round series versus the Ottawa Senators, and he should be impressed. The obvious problems were a lack of depth on the blue line and not enough killer instinct. The Bruins should take the positives out of this playoff round and come back in September hungrier than ever. However, with the expansion draft looming, Boston’s offseason plans could be altered.

The Bruins’ future looks bright with young defensive prospects Charlie McAvoy, Jakub Zboril and Jeremy Lauzon on the rise. The future at the forward position doesn’t look too shabby for Boston either, with Zach Senyshyn, Danton Heinen, and Jake DeBrusk. Mix all that together with Patrice Bergeron, Brad Marchand, David Krejci and Tuukka Rask, and the Bruins will look like a force in the Atlantic division again. But first, we have to find out which players Boston will protect and expose at the expansion draft.

Sweeney will no doubt go with the seven forwards, three defensemen, and one goaltender protection scheme. The Bruins also won’t have to worry about losing players/prospects like Frank Vatrano, Heinen, DeBrusk, Senyshyn, McAvoy, Lauzon, and Brandon Carlo. All of their top prospects will be exempt from the expansion draft.

Tuukka Rask impressed and did a sensational job for Boston this season. Rask registered a 37-20-5 record with a 2.23 GAA, a .915 save percentage and eight shutouts.

Rask has been a top goalie in the league for years, and after the bounce-back year he had, Bruins fans should feel more than content having Rask in net on a nightly basis, even after the debacle that occurred at the end of the regular season in 2015-16. Tuukka bounced back and bailed out the Bruins’ defense many times this season, especially early on in the months of October and November. He’s the lock to keep in the crease, with Anton Khudobin and Malcolm Subban being the goaltenders exposed.

Zdeno Chara and Torey Krug are without a doubt the consensus picks on defense for Boston. The last spot on defense should go to either Kevan Miller or Colin Miller. Twenty-four-year-old Colin Miller just started to come more into form over the last few months of the season. But Kevan Miller had an impressive last couple of months as well to go along with consistent play in the playoffs.

Sweeney has a tough call to make on this one. Don’t be surprised if the B’s GM tries to work out a deal where they can keep one Miller and bribe Vegas with a pick or prospect to not take the other Miller. But if they don’t decide to make a deal, I assume Sweeney will protect Kevan for experience reasons. It’ll be fascinating to see how this plays out.

There’s five clear forwards to protect if you’re Boston. That protection list includes Patrice Bergeron, Brad Marchand, David Backes, David Pastrnak and David Krejci. If Ryan Spooner decides to sign and return with the Bruins, he’ll get a protection slot. I’ve heard people bouncing around on who should get the last forward slot between Matt Beleskey and Jimmy Hayes. To be completely honest, neither deserves the last slot.

The Bruins’ newest player, Drew Stafford, had a good run with the Bruins and should he sign with the Original Six franchise, he’ll assume the last spot. Stafford has a unique knack of scoring for Boston. I would be all for sticking him in a third-line role and watching him feast on opposing teams’ bottom pairings. Dominic Moore would also be a good player to protect if a Stafford signing doesn’t come to fruition. Moore has great hockey sense and is one of the best defensive forwards in the game. The 36-year-old gives it his all 100 percent of the time, kills penalties and does very well on faceoffs. What’s not to like about a player like that?

Beleskey could’ve been a prime pick to go to Vegas, but he had a trainwreck of a year with Boston due to injury and not playing on a consistent basis. Beleskey is a hard-hitting, hard-working left wing and does a pretty good job in the corners. If Beleskey doesn’t keep his feet moving, he’s virtually nonexistent. He scored over 20 goals once, and that came when he was on a line with Corey Perry and Ryan Getzlaf in Anaheim. Beleskey only scored three goals, five assists and eight points in 2016-17. The 28-year-old will have a ton to prove next season, especially with his sizable cap hit.

The Golden Knights could decide to go the cheaper route with Jimmy Hayes. The former first-round pick scored 19 goals back in 2014-15 but hasn’t made the impact that Bruins management hoped he would. After 58 games played in the regular season, Hayes recorded only two goals, three assists, and five points. From that point, the Bruins had seen enough out of him. For the entire playoff series against the Senators, Hayes did not play another game. One can’t blame the coaching staff for making that move; Hayes was just too much of a passenger during the regular season. The B’s couldn’t afford to have a passenger on board for a playoff run. And honestly, he shouldn’t even be on this roster come 2017-18 training camp.

On defense, Colin Miller also could give Vegas some spark. Miller is more of a puck-moving type of defenseman who has a rocket of a shot, brings speed and is capable of playing the power play as well. The 24-year-old has to work on his play without the puck and become more of a physical presence if he wants his ice time to climb. The positives outweigh the negatives, and personally, I think Miller is one of the favorites to be on a jet to Sin City.

McQuaid is a tough, hard-nosed defenseman who is physical and drops the gloves every so often. The veteran defenseman is a stay-at-home threat who uses his body to block shots on a consistent basis, wins puck battles in the corners, and excels when he keeps his game simple and doesn’t try to do too much. The problem with McQuaid is his injury history. McQuaid nearly played in an entire season with Boston, but they severely missed him when he went down with injury on a hit by Alexandre Burrows in Game 2 versus Ottawa. He’s probably another favorite to possibly hit T-Mobile Arena soon.  Here’s one of my favorite McQuaid moments from last season: 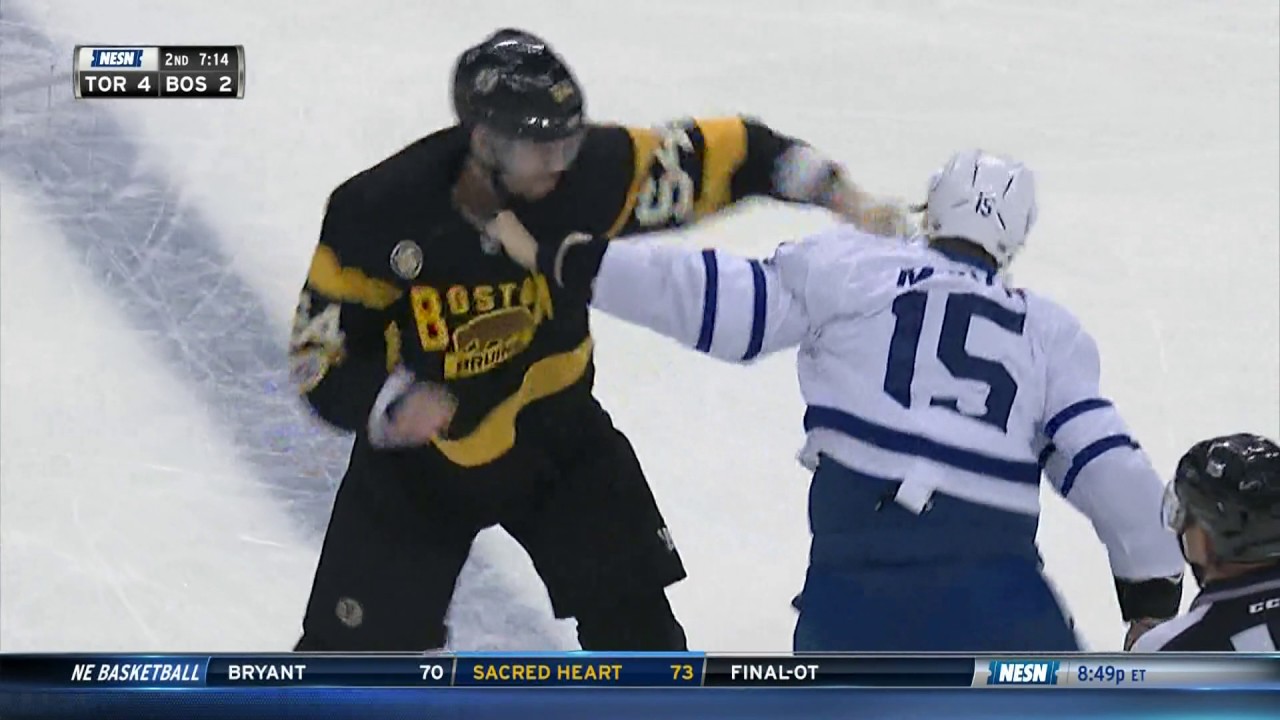 Then there is the defenseman everyone in Boston forgets. Joe Morrow was a former first-round pick of the Pittsburgh Penguins back in 2011. Morrow is also a puck-moving defenseman and has great skating ability. The Alberta native needs to work on improving game-to-game consistency and limiting turnovers in his team’s end of the ice. The 24-year old hasn’t gotten much of a chance from any NHL organization. Perhaps the Golden Knights will finally give him the chance he probably deserves. Morrow is my dark horse candidate for Vegas.

The strongest candidates to go to Vegas are all defensemen, and that could be a problem for Boston again in 2017-18. The Bruins know what it’s like to have many injured defensemen in a playoff series. Boston’s depth on defense needs to be addressed and dealt with at some point in the offseason. The team will most likely lose one of the Millers, McQuaid or Morrow.

Kevan Miller and Adam MQuaid’s contracts look very friendly to Vegas, and I’m sure McPhee wouldn’t mind inserting either of them in their top four. There’s absolutely no way the Bruins will be unscathed after the expansion draft, but losing a key piece on defense looks inevitable. The arrival of Charlie McAvoy will help sooth the pain, but he won’t be the answer to all the Bruins’ defensive depth concerns.

Rich has a love for all sports but his love for hockey and the Boston Bruins has grown exponentially throughout the years. Now he is letting the world know of his sports opinions by writing articles for the team he grew up watching.