Last week, Geoff Molson seemed to give many fans of the Montreal Canadiens the worst St. Patrick’s Day present ever. More of Marc Bergevin.

What exactly does this guy have to do to get fired?

Bergevin, of course, has been on the hot seat after this garbage fire of a season. Developments this year have furthered the now-common view that Bergevin has made poor trades and overseen an organization weak in player development. Perhaps the most disconcerting aspect of his tenure is his fundamental failure to outline a clear organizational plan based on realistic goals and sensible performance measures.

Instead, Bergevin has careened this team back and forth, to and fro. The Canadiens spent years getting fast and then tried to get tough overnight by trading for grit. After failing to re-sign key defensemen, trading or otherwise losing others, Bergevin famously announced the Habs’ obviously depleted defense corps was “better” than last year. Six years in, virtually no one will defend him or the decisions he has made.

No one, of course, except the one person who matters most. Mr. Molson is the owner and has apparently made his choice. Despite the outrage of fans, empty seats at the Bell Centre and a drop in TV ratings, Molson wants more Marc and beaucoup Bergevin. Fans can like it or lump it.

Geoff Molson says he’s confident that Marc Bergevin can get the Canadiens back on track. He also said he doesn’t anticipate changing management structure going into next season #TSN690

It does beg the question, though: What exactly would Bergevin have to do to lose his job as general manager? Here are five ways Bergevin could still be shown the door.

First of all, I am loathe to question anyone’s fashion sense. But come on. Enough with the tight shirts, tailored suits, trendy eyeglasses and gelled tousled hair. Seriously.

Bergevin seems to be auditioning for a part on TV’s worst faux reality romance show, The Bachelorette. That is not a compliment. He is like the guy on the show that gets cut alongside five other losers in one of those mass dismissals. No rose for you! You get the feeling his specially-fitted fashion-forward zoot suit would be the most memorable part of his walk of shame.

It is by design. When asked to describe his fashion sense during a photoshoot in an elegant Outremont residence, he stated:

I do get comments about the way I dress sometimes – even at the GM meetings the other day. One GM for an American team came over and said he went to the store to find a suit like mine. When he showed me the sport coat he found I told him I used to have material like that – but it was on the welcome mat in front of my door.

Good one, Marc. Just don’t be caught wearing a pair of Walmart sweatpants. You might be a disaster as GM but at least you are looking good, no?

As GM for the Montreal Canadiens, Bergevin is in the media a lot. He is always quick with a quote. They are usually pretty strange. They are often difficult to square with reality. Just a few:

Just before the Subban Trade:

When a GM calls me I don’t know who he’s calling me about so I answer the phone. Yes, I’ve received calls on P.K., but I’m not shopping P.K. Subban. I can tell you that…Of course you never say never. If somebody offered me half of their team well you’ve got to make it work, but it’s not my intention.

On the John Scott trade:

The timing, that was the timing to make the trade with John Scott. That has nothing to do with the Montreal Canadiens with the All-Star Game. I made a trade that at the time, I had to make that trade. I have a reason that I can’t really tell you why, but if I could, you would probably understand.

On Jonathan Drouin at Center

In the perfect world, if we had this No. 1 center, this guy that could make plays, a high-end center – no, he’d probably be on the wing. But he still does the best for now for what we have.

Those are deeply weird quotes. There are a lot of others. A GM that makes so many gaffes might worry some owners. In Montreal, this seems to be a strength. To keep his job, Bergevin will need to keep confusing the media in both of Canada’s official languages. Bet you can’t wait for the end of year presser. I mean, what will he say next?

3. Reject Character as a Central Attribute

While some NHL teams are focusing on speed and skill, in Montreal, “character” is an attribute that seems to be important. Character, however, defies definition. It is one of those “I know it when I see it” kind of things. Bergevin wants to categorize “character” as if it is an objective measure, not some subjective notion.

Bergevin has built a locker room in his own image, full of character and fun. And with his own confidence, the GM hasn’t been afraid to surround himself with top-notch people in hockey operations. The biggest improvement in the Canadiens since Bergevin took over has been pro scouting, which has identified character players like goalie Mike Condon, defencemen Jeff Petry and Tom Gilbert, and forwards Dale Weise, Tomas Fleischmann, Brian Flynn, Torrey Mitchell and Alexander Semin (OK, nobody’s perfect).

That is a rare Cowan quote that has not aged well. Only one of those “character” guys is still with the team. Last year, as the Canadiens were gearing up for the playoffs, they acquired Dwight King, Andreas Martinsen, and Steve Ott. Character guys. The problem is that none of these players are still playing in the NHL. Oh well. If Bergevin starts focusing on skill, he will be out. I, for one, can’t wait for a few more depth defenseman and bottom-nine wingers. Y’know, character guys.

Geoff Molson wants John Tavares in Montreal. He wants him so badly that he skirted the NHL’s tampering rules which forbid any team not named the New York Islanders from making any sort of approach to Tavares until July 1, 2018. Overtures cannot be made directly, through secret channels or through the media. In the past, it has resulted in fines.

It happened in Montreal last summer.

Of note this AM at #Habs golf tourney: G.Molson saying he and GM Bergevin hold discussions regarding star players,"including (John) Tavares'

Tavares (27) is shaping up to be the most significant UFA in NHL history. He is likely to surpass Jonathan Toews and Patrick Kane’s $10.5-million cap hits and become hockey’s second-richest player behind Connor McDavid. The big question is whether Tavares will leave the Islanders. Is this the promise Bergevin whispered into Molson’s ear this winter?

5. Be Seen Drinking a Blue

If Bergevin’s numerous failings have not been enough to justify ending his tenure as GM, it is hard to see how dressing down, being more forthright with fans or acquiring skilled players would. Even failing to sign John Tavares, this summer’s prized UFA center, might be forgiven. However, there is one thing Mr. Molson could never forgive. 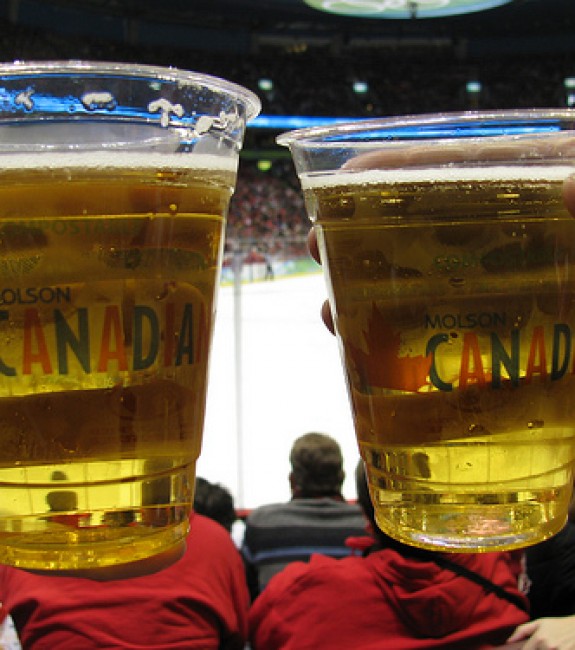 John Molson founded Canada’s oldest beer brewery on the banks of the St. Lawrence River in Montreal. In 1959, Molson Canadian was first brewed, and today it is one of Canada’s best-selling brands. Beer is important to Geoff Molson. Perhaps the only way Bergevin could be fired is if Marc was seen swigging on a libation from Molson’s chief rival, Labatt.

C’mon Marc. Just a sip. See how it tastes.