CBA 2012 is almost here. Who do you have, Owners or Players?

I know, I know–there are no winners (lie) in these ‘labor disputes’ (misnomer) but the real losers are the fans (true). Still, who do you like? Despite my middle-class upbringing, I tend to be an Owners fan in these scraps.

It’s not that I’m anti-Players or even diehard-Owners. It’s that I find the Players’ principle bargaining chip to be the ultimate betrayal.

I don’t deny the Players their right to collective bargaining–private (and in some cases public) sector workers have the right to organize a union and negotiate for better working conditions with management, or to name someone to negotiate on their behalf.

The impact of collective bargaining rights is so profound it defies hyperbole. When they became law in the US in 1933, the head of the Amalgamated Clothing Workers union Sidney Hillman said it was “like the realization of a dream” and many ordinary working stiffs didn’t believe it when they heard it, thinking it was too good to be true.

National Hockey League Player’s Association (NHLPA) chief, Donald Fehr, regards collective bargaining with some loathing and refers it to as ‘adversarial’.  That is to be expected from the director of the NHLPA, since this union has nothing in common with its forebears, those blue-collar labor reform unions who fought against industry at its most arrogant, and the principles they fought for—and for which some even died—dramatically improved the human condition:

What contribution has the NHLPA made to the wider North American workforce? There is a single logical answer: It hasn’t made one. It can’t make one. A union that represents just 800 people who are already financially fit and who already enjoy extraordinarily gracious benefits subverts the idea of a labor union. It makes a joke of it.

That doesn’t make it evil. Neither is it at all ennobling.

To be totally honest, I really don’t care what the deal is anymore. All I care about is getting the game back on the ice. — Jeremy Roenick (2005)

I suspect Don Fehr is like Johnnie Cochran or Claude Lemieux–you don’t like their tactics until you’re on their team. Hiring Don Fehr is the union equivalent of getting Jaromir Jagr to dress for your side in a shinny, and the players voted him in for at least three reasons:

One hopes the players realize this is not a one-way street. Fehr will exact his price in unforeseeable ways. He may intimidate the owners right now, but he unifies through intimidation. Fehr quashes dissent by delivering big paydays, and in the NHL he has a union membership brought up by tradition not to speak out. Arrogant, argumentative and cagey, he loves to win and he refuses to concede a loss. In 1994 Fehr was OK with watching 89 straight years of World Series baseball come to an end, so fans shouldn’t count on him to hold in high regard any of hockey’s grand traditions.

New York Daily News sports columnist Mike Lupica called for Fehr to get out of baseball several years before he actually did. Lupica danced on Fehr’s tenure like it was a grave.   His was hardly the only voice raised against  Fehr’s treatment of the game. So how did hockey inherit him?

He had just stepped down from a 23 year career as the director of the MLBPA in 2009 before accepting an advisory role with the NHLPA in 2010 that coincidentally turned into an executive directorship. Serendipitous that he should stumble into the sport just as the CBA was expiring. Serendipitous that he should find the sport as its revenues began to hit the low billions.

In the media Fehr is doing his best Columbo and playing the bumbling hockey neophyte, but he’s far too calculated for serendipity. He probably saw hockey coming a mile away.

I don’t have any sympathy at all for hockey owners, and when people suggest players are taking too much advantage of the owners I simply remind them of the days when owners took advantage of the players … When Bobby Orr came along, Gordie Howe was playing for less than $40,000 a year and the owners were making astronomical profits. — Alan Eagleson

If true, then in 2012 dollars Howe was making roughly $300,000. Circling 40, with around 20 seasons under his belt, Mr. Hockey was far removed from the days when he made shin pads by stuffing mail order catalogues  into his socks.

If ever a group of players had a valid argument for going on strike it would have been the players of Howe’s (younger) era. Hockey’s Original Six were income machines for their owners thanks in no small part to player exploitation. Those players ought to serve as reminders that people can do a job they love, get compensated well for it, and still have reasonable grievances against management.

So the crook Eagleson is right, the owners deserve no sympathy, but some measure of understanding won’t hurt.

After all, the owners have a league that offers X, Y and Z. If the players don’t like those terms, let them play elsewhere, or start their own league. The latter will involve a significant financial risk; investing their earnings in the formation of that new league might result in losing it all. As NHL players if they perform reasonably well they will enjoy job security for the length of their contracts since their contracts are pretty much (but not wholly) guaranteed. It’s different for the owners. That’s why they’re owners, because they undertook a significant financial risk, although Gary Bettman devotes a lot of energy towards mitigating that risk.

They may not be dressed in black and twirling the ends of their mustaches, but we still expect Owners to be greedy and play dirty.  We expect them  to despise free agency and to act with a smug and detestable sense of entitlement. We also expect them to be willing to disrespect the game.

Thank you to every one of you guys from the bottom of my heart.* — Jonathan Quick

This was always about you … Thank you so much for your commitment and passion to the LA Kings.* –AEG President Tim Leiweke

*Why is it that “You’re welcome” is such an awkward response?  Players and owners alike are always thanking the fans. When I worked as a waiter I came to distrust any table that thanked me too often, since the number of ‘thank yous’ negatively correlated with the size of my tip.

When CBA 2012 negotiations begin this summer, there ought to be a chair for the fans’ representative, because the current CBA is written so as to make us fans like dark matter for physicists: only evident indirectly. In the case of the CBA, you detect fan presence through the otherwise mystical flow of revenue into the conversation. A process of elimination strongly suggests that fans are the primary source of that revenue, therefore we must exist.

We don’t see any ice time in the CBA until it’s all but decided. Then, we get the nod twice.

Exhibit 14, Section 9 prohibits the players from using tobacco products in our presence. Exhibit 14, Section 11 requires that we be treated “with respect and courtesy.” That section also says that “Autograph requests in the vicinity of Club facilities should not be unreasonably denied.”

Section 9 is just a public service message by omission. Section 11 fails to define ‘respect’ or ‘courtesy’ or the difference between a reasonable and an unreasonable decision to deny granting an autograph–curiously overlooked or under-considered anomalies in so precise a document.

We treat a work stoppage, a strike, as a last resort. You consider it only when all alternatives failed. –Donald Fehr

Should the players play the bargaining chip I consider to be an unthinkable betrayal and go on strike this fall, I only hope they do it the way it is supposed to be done—by actually striking.

Generally, when workers go on strike, they stop doing the work that they believe they aren’t being fairly compensated for. Welders stop welding. They don’t fan out to other cities and weld things together there. Part of the point of a strike is to withdraw your skill set from the market so that management can see why it needs your skill set.

The AHL, CHL and ECHL are under entirely different CBAs. If NHL players strike, they should not be welcomed to play in any other pro league. Indeed it will be unfortunate if the NHL’s working conditions prove so deplorable that a strike is unavoidable, but that doesn’t entitle the players to knock guys out of jobs in leagues with less deplorable conditions.

If any of the minor pro leagues should strike in the next couple years, will the NHL open up roster spots for those players? 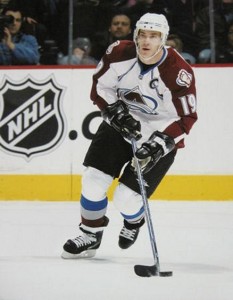 We never had it easy growing up. Dad worked for everything we had. He never let me off the hook. In hockey it was the same thing: ‘Get out there and work.’ — Joe Sakic

For players, reaching the NHL workplace is–to borrow Sidney Hillman’s simple words–the realization of a dream. We expect the players to care more about hockey than anything else.

And that’s not fair. They ought to care about their contracts and their futures, and they ought to exercise their right to negotiate for a fair slice of the pie. By bringing on the likes of Donald Fehr, they have done just that. I hope they will remember though that as quickly as they hired him they can vote to fire him.

In the future, Fehr will be the subject of law school classes, but he won’t be mentioned alongside great labor leaders like Samuel Gompers, or Eugene Debs, or even his cranky mentor Marvin Miller. Outside of the players themselves, Fehr is as culpable for perpetuating baseball’s steroid culture and for the subsequent tainting of every player and achievement of the era as anyone, arguably moreso. What mess will he leave behind in hockey?

Don Fehr is not the reason I don’t root for the Players. I don’t root for the players because these sickening disputes merely shift cash and embitter fans. They cheapen meaningful notions like picket lines and fair wages by having the audacity to use them with a straight face. In labor unions as it is in hockey, solidarity is not a convenience: If hockey players were so committed to the values of labor reform, and the NHL offered such a Dickensian workplace, why didn’t NHL players use a day off to join arm-in-arm with the teachers, cops, firefighters, truckers, nurses and other unionists in the Wisconsin protests of 2011?

Likely for the same reason none of those workers would join the Players on a pro hockey picket line.

The players assume the role of a bargaining collective once every several years because that is their right. They are hockey players every single day because that is their privilege. If they want to establish their legacies as labor crusaders, they should quit the sport and go take on the union busters over at Wal-Mart. If they want to exercise their hard-earned privilege to play the greatest game in the world, then come September and come hell or high water they should lace up their skates, get out there, and work.