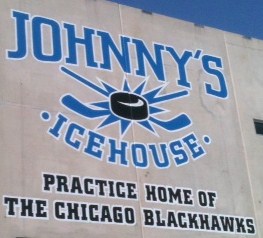 The Chicago Blackhawks  frustration level continues to percolate as they’ve lost that winning feeling.  Now that realization has sets in–that they don’t deserve to win the way they’ve been playing recently–it will be a measure of team character for the Blackhawks to find a way to shake off five straight losses and bounce back to that winning feeling.

The Hawks returned home for a few days before heading to Colorado, where they’ll continue their road trip against the Avalanche Tuesday night.  The team has open practices scheduled at Johnny’s Ice House West for Sunday and Monday.   Given the compilation of recent losses it may be wise for those planning to attend to first consider the posted reservation: “DATES AND TIMES SUBJECT TO CHANGES ON SHORT NOTICE.  We apologize for any inconvenience.”

The Blackhawks showed up in Alberta trying to leave the taste of an 8-4 loss in Edmonton  behind where Sam Gagner and the Oilers had fans, for the second time this season, chanting , “Make it ten, make it ten.”

Calgary went up 1-0 with 7:36 remaining in the first frame as Ray Emery was on the receiving end of a Olli Jokinen missile off the back bar that entered and left the net so quickly that both teams played on for seven seconds before a review was whistled from center ice. 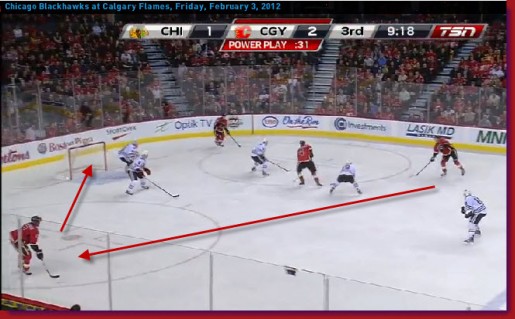 While the Flames were also trying to recapture that winning feeling, Flames goalie Miikka Kiprusoff, wasn’t about to let that happen for the Blackhawks, stopping 26 shots for his 299th NHL win.   Kiprusoff’s early-game brilliance kept the Blackhawks from establishing momentum despite his getting beat by Brent Seabrook with 28.4 seconds left in the first period.

The skates started coming off the Blackhawks game while short-handed on a Michael Frolik double minor for high sticking when Jay Bouwmeester broke the 1-1 tie with 1.04 remaining in the second frame. It’s hard not to feel bad for Frolik who was determined to impress Coach Quenneville and aggressively help the Hawks to regain that winning feeling. 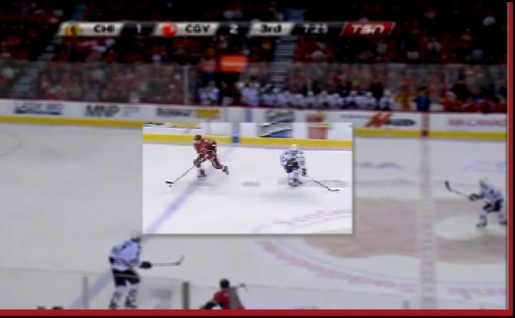 In the final period the Flames captain, Jarome Iginla, gave his team room to breathe with 7:21 remaining when he got behind the Chicago defense to go one-on-one with Emery and make the score 3-1 on a dek-and-freeze that left the Hawks net wide open. 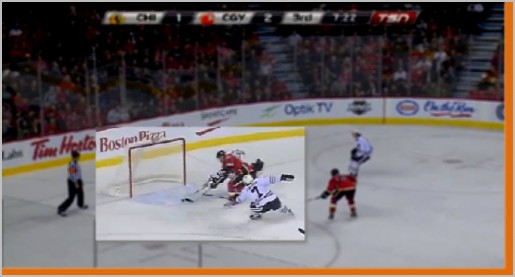 Chicago had the edge in first period play outgunning the Flames 13-6, but Calgary flipped the record in the second with a 16-6 shot domination.

Emery fell to 11-4-2 despite giving the Blackhawks a quality performance  with 29 stops.

As tensions rise, the Blackhawks open practice sessions Sunday and Monday may close at the last minute.  And surely some of the players–in the back of their minds– will have Tuesday night’s overtime loss in Vancouver and their 0-4-0 record for the season against the Oilers second guessing themselves.  But this is where the metal cuts the ice of a team’s character and at this point confidence–not excuses– is the RX for a championship march.