They got 2 of 3 in a big win against the Buffalo Sabres on Tuesday, a team that already beat them in a shootout earlier this season.

But the win Tuesday didn’t come with a little resistance. The Red Wings found themselves in a 3-1 hole midway through the second period, when Jakub Kindl stepped up to blast a shot on the power play, but the shot was blocked, resulting in a 2-on-0 the other way for the Sabres.

Andre Benoit rifled a shot past Petr Mrazek for the shorthanded goal, and Detroit was down two goals to the worst team in the Atlantic Division.

However, there was a turning point late in the second period for the Red Wings. Luke Glendening held a clearing attempt at the blue line, Tomas Jurco gathered the loose puck and dished it off to Danny DeKeyser, who took what looked like a meaningless shot that found its way past Michal Neuvirth to cut Buffalo’s lead to 3-2.

DeKeyser’s shot appeared to have no chance of getting past Neuvirth, but it did, and that’s when the barrage started. The Red Wings scored four goals in the third period, and the confidence level on the entire team was as high as it was during the team’s 9-2 stretch.

Passes were crisp, players were skating hard and making good decisions with the puck. It was a far cry from the team that had lost the past six games in a row.

According to MLive.com’s Aaron McMann, Pavel Datsyuk said he felt the momentum change in the second period. Datsyuk told McMann:

“We came back to the locker room, and I don’t know what the shots were, maybe double, and I don’t know how many we lost in a row not getting two points. We wanted to come out in the third and try to work to get both points. We felt the momentum change in the second there.”

The Red Wings got a big boost from their power play against the Sabres, as they were 4 of 6 on the night, and three of the four third-period goals were power-play goals.

Gustav Nyquist and DeKeyser each had opportunities to shoot but opted to pass. Fortunately, the extra passes worked for the Red Wings, because the Sabres were so condensed in their zone it gave Detroit a ton of open space to cycle the puck to the open wing. 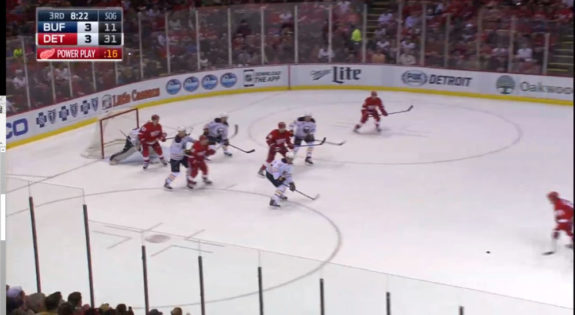 In this case, the old adage of “take what the defense is giving you” meant the Red Wings could make that extra pass.

Stephen Weiss also had a power-play goal midway through the first period, as he deflected a point shot to tie the game at 1-1. The Red Wings are 9-1-2 when Weiss plays. Weiss never will admit he is the reason for the Red Wings winning when he is in the lineup, but he definitely is a key contributor. He’s had at least one point in seven of the 12 games he has played in this season. With that kind of offense, it’s no wonder the Red Wings win when he is on the ice.

After Tuesday’s game, the Sabres have the 26th-ranked penalty kill in the league at 76.2 percent. Good teams take advantage of mistakes made by struggling teams, and the Red Wings certainly used the power play to their advantage.

Johan Franzen is the definition of a streaky player. He’ll score 10 points in five games, then he’ll go 15 games without a goal. He broke through against the Sabres — on the power play nonetheless — for his first goal since Nov. 20, and now, we will probably see a barrage of goals from The Mule.

We all know what happens when Franzen breaks those scoring droughts…Happy times.

Franzen’s goal was a perfect example of good things happen when you get the puck on the net. In Franen’s case, he rang the first one off the goal post, followed up his own rebound and shelfed the second shot to make it 5-3 Detroit.

Detroit has struggled to get as many shots on net as possible, usually opting to pass the puck instead of shoot. DeKeyser’s goal and Franzen’s goal are good examples of why it is usually never a bad idea to throw the puck at the net.

During the third period, the Red Wings looked like the team that went 9-2 in November and the early part of December. The confidence is back, but unfortunately, they have a four-day break before they travel to Ottawa to face the Senators.

Can they keep the momentum going?